Ascent to Špičák and Svaroh

Around Devil's and Black Lakes

Jiří Šmejkal
Wrote 27 articles and follows him / her 2 travelers
(1 rating)
Hiking circuits & Trekking Mountains Climbing
© gigaplaces.com
They been there:
They want there:

This circuit has two different parts – the first part from Železná Ruda around both lakes with a turnoff to Špičák leads along busy hiking trails and vice versa the second part, the ascent to Svaroh and return to Železná Ruda, leads along unmarked roads a little luck you won't meet anyone. The route measures about 22 km and can be managed in 8 hours.

The circuit starts at the square in Železná Ruda, from where we follow the blue tourist sign leading first along Javorská Street. Behind the gas station, the blue turns right from the main road and begins to climb through the forest. The asphalt road will soon turn into a paved road and the blue sign will take us to the crossroads of the Adolf Kašpar Monument. A short detour leads to the monument itself, which is a few tens of meters further. At the crossroads, turn right and follow the red light slowly (again along the asphalt road) to Devil's Lake. This section is not very lively for the hiker, but it runs quickly and after three kilometers we are already at the end of the asphalt road and a short descent to Devil's Lake awaits us. The view of the vast surface (this is the second largest glacial lake in Šumava) and the slopes of Jezerní hora (1,343 m above sea level) will definitely make up for the previous „boredom“. 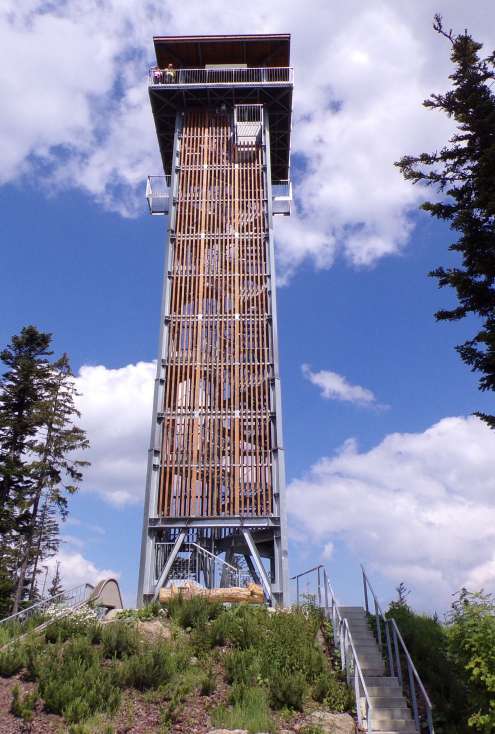 From Devil's Lake we continue along the red road. The road climbs a little steeper to the crossroads Pod Malým Špičákem. At the crossroads, turn right along an unmarked road (from 16 September to 14 June, it is forbidden to enter) and after about 750 meters we are already at the top of Špičák (1,202 m above sea level). On its southeast slope is the famous ski area. In addition to the upper station of the cable car and small snacks, there is also a high, freely accessible lookout tower at the top.

From the lookout tower there is an excellent view in all directions. In the photo below, Malý Špičák is in the foreground, to the left in the distance is the half-bare peak of Jezerní hora, to the right of it is not very significant another goal today, Svaroh. And in the middle, in the distance behind Malý Špičák, you can see the peaks of Velký and Malý Ostrý and even further, for example Čerchov, the highest peak of the Bohemian Forest. From the lookout tower there is also a beautiful view of the Devil's Lake and the highest peak of Šumava towering behind it – Velký Javor: [https://www.gigaplaces.com/…velky-javor/] – see introductory photo.

From the top of Špičák we return to the red marked hiking trail along the same path. At the crossroads we turn right and continue to the Rozvodí crossroads. Here we turn left and after one kilometer of a slightly steeper descent (still on the red) we reach the surface of the Black Lake. Black Lake is not only the largest glacial lake in the Šumava (18.47 ha), but also the largest natural lake in the entire Czech Republic (although its level has been slightly raised by an artificial dam). The lake also serves as the upper accumulation tank of the pumped storage hydroelectric power plant of the same name, the lower reservoir is the Hamry Valley Reservoir in Úhlava. Above the opposite shore of the lake rises more than 300 m high Lake Wall (unfortunately the photo is not very good due to unsuitable light conditions).

We continue along the red road, which leads first around the lake shore and then connects to the asphalt bike path. After the asphalt we climb a short climb and slowly begins the second, more adventurous part of the hike. There is no marked path to the Svaroh from the Czech side. Approximately 1,300 meters from the connection of the red sign to the cycle path, there is an unmarked turn to the left, which after a few more turns will take us to the Svaroh ridge. But if you want to shorten the route (at least in terms of distance, it's not so certain in time), it is possible to turn left from the asphalt road earlier. It is probably best to use one currently unused and overgrown, yet well-defined path, which after a while will lead us to a dry riverbed, which we then climb about 500 – 600 meters (if perhaps water flows in the riverbed, it is probably better to continue along him). The riverbed will lead us to another asphalt road, which ends in these places. But further to the slope, another unused and therefore high grass-covered path continues. As we ascend, we get between younger and younger trees, the path is less and less clear (sometimes more than guessed), but behind us opens a great view. After less than 500 meters, we finally get back to a clearer path, which, if we turn left, will soon lead us to the ridge. Before continuing upwards, I recommend stopping here for a while and enjoying the beautiful view of the Nýrsko reservoir, among others.

Svaroh and its slopes in higher positions are among the areas affected years ago by wind and bark beetle calamity. But even here the forest is regenerating quite quickly, it is full of young trees and if there is no further calamity, the prospects will soon be limited again. The state border runs along the ridge and a footpath (German marked hiking trail) walks along the blueberry path. We turn right along it and after a few tens of meters we come to an information board about the former Juránek's cottage (or cottages), which once stood here. Today, only a pile of rubble remains.

After another about 200 meters we are already at the top of Svaroh (1,333 m above sea level). To the right of the road is a small rock garden with a memorial plaque to Arny Juránek, a ski promoter (after whom it was named a former cottage nearby) and a metal cross. From the cross is a nice view, especially to the north and west. If you want to enjoy the view to the south, to the German hinterland, just follow the marked path a few tens of meters on the German side to another small rock with a cross – Zwercheck.

Return to Železná Ruda is possible by various routes. If you do not want to return along the same route as you came, it is possible, for example, in an indistinct saddle between Svaroh and Jezerní hora to turn right on the German trail Lo 5 Zwerchecker-Steig and then continue on to Železná Ruda. Although the tempting well-trodden path towards Jezerní hora also continues from the mentioned saddle, there is also the border of the Černé a Čertovo jezero National Nature Reserve with a ban on entry. So, unfortunately, the ordinary mortal must avoid this area.

Author: Jiří Šmejkal © gigaplaces.com
Applaud the author of the article!
Share it on:

A big trip for a little boy to Šumava

Šumava offers the most peaks of the Czech mountains over a thousand meters above sea level, although most of them are not very… continue reading