The Big Bell unexpectedly without people

Markéta Fibigerová
Wrote 23 articles and follows him / her 10 travelers
(1 rating)
Mountains Climbing
© gigaplaces.com
Suitable for:
Climbers
They been there:
They want there:

We chose a somewhat untraditional variant with a starting night at Erzherzog-Johann-Hütte, which meant a greater number of kilometers and elevation, but we were alone on the ridge and also at the top cross, which is not a good luck for someone. Stüdlgrat, a climbing route to the Grossglockner, is marked with AD, III + difficulty, but there are many places secured by borháky and fixed ropes that make the whole ascent easier. Conquered by Cyril and Methodius 2019.

Due to a traffic jam near Munich and a small „suitcase“ on the highway (when two „cupcakes“ go climbing, they can easily „chat“), we arrived at the parking lot at the Lucknerhaus only after six o'clock in the evening. How much is that up? Fifteen hundred high. We'll put it in three, three and a half hours …? We call the cottage to hide our dinner. After less than an hour of pedaling, just above Lucknerhütte, we come across a sign: Erzherzog-Johann-Hütte 4h 30 min. Margaret, she didn't see it, Lucka reports. And no, no, we're there for the tenth time. (The time was probably estimated due to the ferrata, difficulty about B.) They didn't hide our dinner, but they were left with goulash. The cottage was full, half guided with clients; from here it usually sets off in the morning to normal, it is about four hundred meters to the top. For insiders: Stüdlhütte was occupied, so we chose this unusual variant, it seemed better to us than staying down for the night. 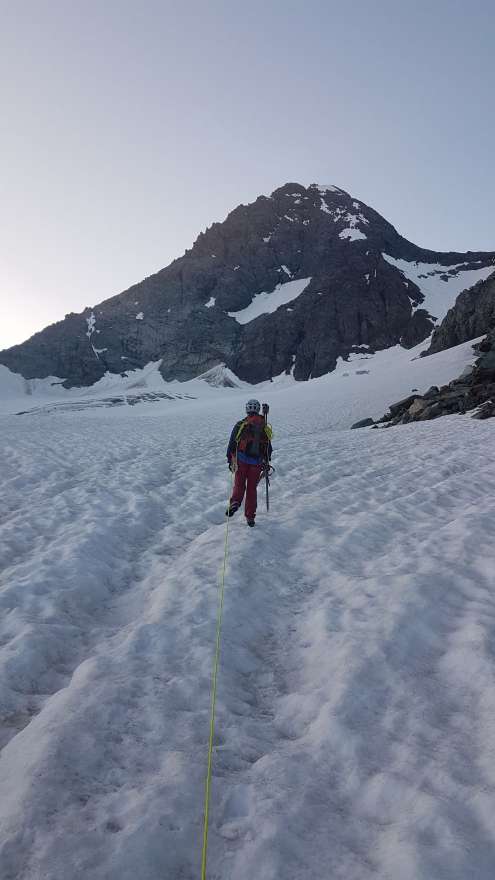 Grossglockner right in front of us, still a picture from the evening trip. The cracks are slow here, but we prefer to connect. „Then I'll take it straight up,“ jokes fall, but the truth is that it growls in our bellies and the height of about three thousand is beginning to be known.

View from the cottage to the top

Breakfast is at the cottage at five o'clock, we leave shortly before six. While the others go up (the photo shows the normal path leading along the glacier and then up the rock), we head down, a descent of six hundred meters to Stüdlhütte to the Stüdlgrat ridge (in the fog), which is to top about one altitude kilometer.

In the end, it didn't take an hour for the Stüdlhütte hut. it is longer, it is usually correct and faster than the shorter, tempting one … Seven o'clock in the morning, no one anywhere, why was the Stüdlhütte occupied? Or is everyone in front of us?

We get on the ridge after about an hour's walk up the glacier, at first rubble and stones run under our feet, but it improves quickly, the ridge then holds up quite well and we also manage to find our way in the rock. From the top to the west, roughly at a right angle to our path, stretches the Glocknerwand ridge, which is a complete traverse of the Grossglockner, we watch some figures on it. There is relatively little to be found about this journey to the top; Háček's description that it is an „eleven-hour nourishing hike that equals the Taschhorn-Dom traverse“ is particularly difficult for a person. The wind is getting stronger and it's really quite unpleasant, so the forecast didn't quite promise this, Lucka isn't climbing somehow and you can't wait much in that wind, you can't climb without gloves either. 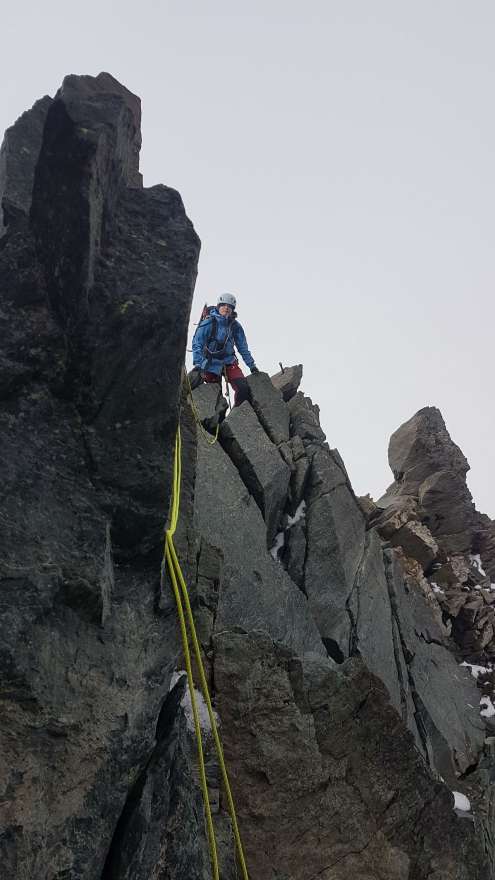 The path is honestly secured by borháky, we are constantly securing, sometimes we throw the rope only over the stones so that we do not have to return the carabiners, it is a maximum climbing „for three“, but it is airy.

The hob (III + / IV-) is the hardest place of the whole trip. With a backpack on your back and in the mountains, it's a little different than in climbing and from the edge (left) what the only one „takes“ is the view all the way down to the glacier, but there is security, there really is no need to panic. 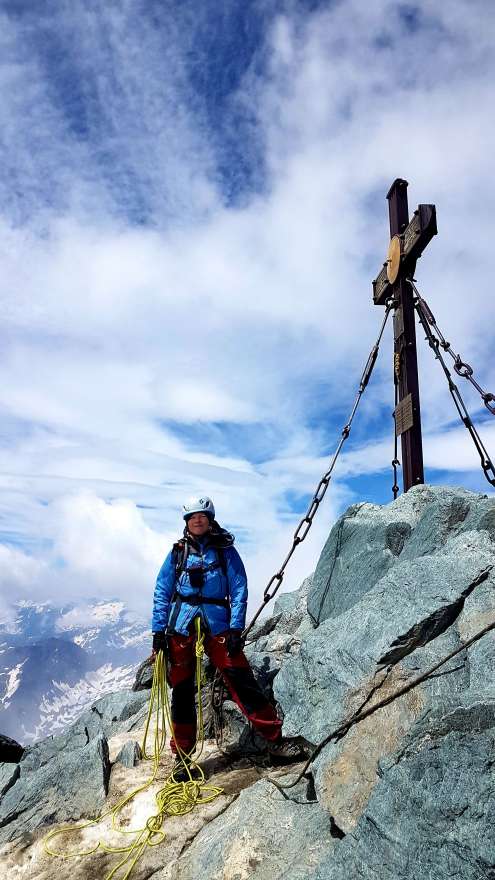 Lucka at the cross, even with a blue sky. The Grossglockner is the highest mountain in Austria and was first climbed in 1800 at the instigation of the Carinthian diocese. The local priest is said to have been brought here so that he can be enrolled in the annals, which does not surprise me, the view was magnificent anyway, especially without the rods and fixed ropes that are normal today.

View from the top

View from the top of the Kleinglockner, over the Obere Glocknerscharte saddle. We have about an hour's descent to Erzherzog-Johann-Hütte. On the left you can see a piece of old normal from the east by Franz Josefs Höhe.

General view of the Stüdlgrat ridge

We didn't want to go down from the cottage. The number of descending meters was added to 2,500 that day. It was nice. The most profaned hill in the Eastern Alps has finally been conquered, even on the day when the Thessalonian brothers once arrived in Great Moravia, it is a pity that we do not call them Crha and Strachota (translated into Old Czech), it seems so much happier to me.

Author: Markéta Fibigerová © gigaplaces.com
Applaud the author of the article!
Share it on:

Across the Hohe Tauern with children

A trip around Lake Weißsee

Trip to the Mooserboden dam

Ascent to Höhenburg from the Mooserboden dam

The vast majority of peaks in the Alps higher than 3,500 m above sea level are already among the most difficult ones with the… continue reading

Giga List: The most beautiful mountain ascents in Austria

The High Tauern is proud of Austria's highest mountain – the Grossglockner, and it is one of the main goals of climbers in this… continue reading