Behind the King of the Berchtesgaden Alps

Martina Pill
Wrote 25 articles and follows him / her 4 travelers
(2 rating)
Hiking Hiking circuits & Trekking
© gigaplaces.com
They been there:
They want there:

The ghostly Watzmann, a gloomy mountain hovering over Berchtesgaden. The daring ridge leads over three rock peaks and ends at the third highest and at the same time most beautiful peak of the German Alps. In good weather, it is a completely unique experience, great views of the sharp ridge, the Alps and the blue lake Königsee deep down between the rocks. The ridge via ferrata achieves only the demands of A / B and B, but its considerable length and guidance directly along a narrow rocky and airy ridge makes it a literally royal hike, worthy of respect.

Why here and for how long?

You can expect all this and much more from visiting this, but insignificant, but very picturesque, corner of Germany on the map. The Berchtesgaden National Park is a stone's throw from Salzburg. The A1 motorway from Austria or the A8 from Germany make it a very accessible location. It is a beautiful 5 hour drive from Brno. So it's a shame to focus only on crossing the main ridge of Watzmann (which takes 2–3 days), but stay for a while and enjoy the captivating charm of the mountains, clear lakes, ferratas, flowering cities and, last but not least, the history of Kehlstein.

from the exit to the Watzmannhaus

The 2,000-strong Watzmann-Mittelspitze is set in the fairytale setting of the Berchtesgaden Alps. Climbing this peak is not only an adventure, but also a feast for the eyes. With an altitude of 2713 meters, the Watzmann – Mittelspitze is far from competing with the highest alpine peaks. However, climbing it is very popular, because its white rock, in contrast to the adjacent Lake Königssee and the surrounding forests, is a reward for all photographers. The mountain is located in the Berchtesgaden Alps, a complex that stretches in the southeast of Bavaria, about 120 kilometers from Munich, in close proximity to Austria. The Watzmann – Mittelspitze peak itself is the highest point of the Watzmann massif of the same name, which has two lower peaks Hocheck (2651 m) and Südspitze (2712 m).

We leave a parked car in the center of Ramsau bei Berchtesgaden and walk along the marked tourist path to Wimbachbrücke. This is one of the main starting points for hiking tours, mmj. also to the Watzmannhaus chalet. There is a large, paid car park, as well as buses from Berchtesgaden or Königsee. There are countless adjacent car parks, so if there is no space, you will surely succeed elsewhere.

Before you get to the rocky passages, it is necessary to complete the first part of the ascent, which zigzags along the northern slope, it is covered with forest. We go on route 441 and before we get over the vegetation, it's not lively. However, our trip will be shortened by two pleasant pubs and because there is no place to hurry, we will be happy to use refreshments. Our goal for the first day is only the Watzmannhaus cottage, which lies at an altitude of 1930 meters. So at the end of the day we have a solid 1,300 meters of climb. 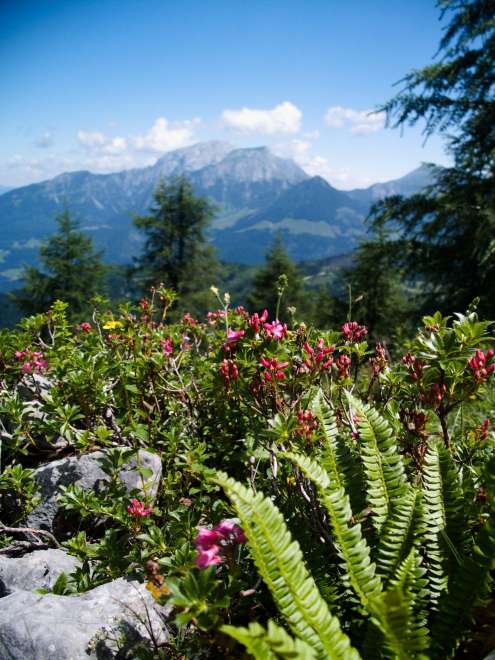 Once you get over the forest, you will wish the journey never ends :)

We come to the cottage after about 4–5 hours and jump a little higher.

The cottage is huge and offers more than 200 places to sleep. You don't have to carry anything with you (sleeping bag, mat). The cottage cooks very well, with OEAV insurance the prices are quite pleasant and sitting on the terrace maybe even more.

Hocheck (2651 m) awaits us first. No need to explain where to go. The dominant peak in the shape of a spike will direct you to itself. The road is clearly visible and from the beginning it has the character of a serpentine. In Hocheck there is a bivouac and a signpost with an approximate time to reach other peaks. The times according to the signpost from the cottage are as follows: Hocheck – 3h, Mittlespitze 4h, Südspitze 6.5h, Wimbachgriessgütte 10h As you can see, this is a long hike and I would not like to downplay these times, but we managed to reach the Wimbachgriessgütte hut (which completes the whole hike and she often sleeps here) in as little as 7 hours and even though we had her booked, we went to the parking lot.

We wake up with the sun and D-Day can begin.

On the way to Hocheck

The first part is purely about climbing stones, rocks, without the need for security

View across the Königsee to the Austrian Alps

Here you can either end your hike or continue on the ridge ferrata to the peaks of the Mittelspitze and Südspitze. I highly recommend continuing, because adventure is guaranteed. Of course, ferrate equipment for the next step is a condition.

It is about an hour to the highest point of the Mittelspitze massif. Two more hours on the Südspitze.

The character of the ferrate is interesting in that you follow a sharp ridge, but no tricks await you (only difficulty B). The ridge itself is slightly difficult with only a few exposed places, the length of the secured path is 2.5 km. The road is often slippery, so it will probably be unpleasant when wet. The path is demanding especially by the total length and elevation. Dangerous in thunderstorms, snow or icing.

At the last peak of Watzmann we are caught in a shower, so we do not procrastinate here and we descend as quickly as possible. It is unpleasant and long. 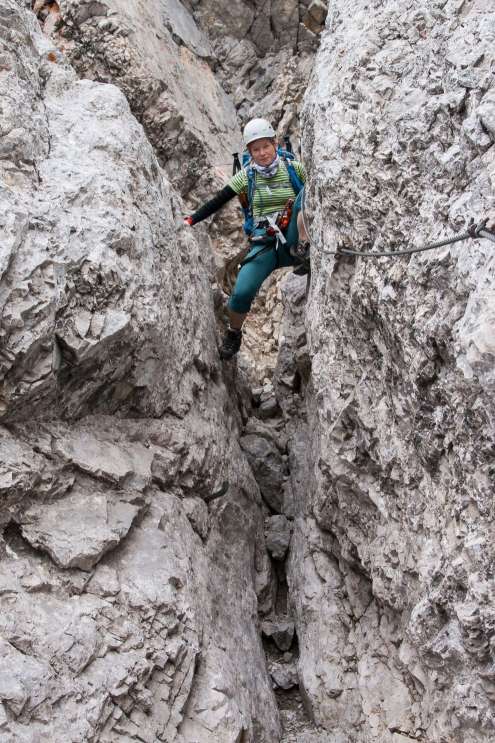 At the top, the weather can break down very quickly and the descent on slippery rocks will turn into hell. After 300–400m from the top we get to the rubble, then to the steep slopes and gradually (very slowly) descend to the rubble covered bottom of the stream – footpath, which we continue to the cottage Wimbachgrieshütte 1326­m.

The beginning of the Wimbachtal valley

After about 3 hours we are finally at the cottage

It is still 11 km from the cottage! In the end, the weather is chosen again and we continue on a pleasant path through the Wimbachtal valley to the Wimbachschloß hut to the car park. 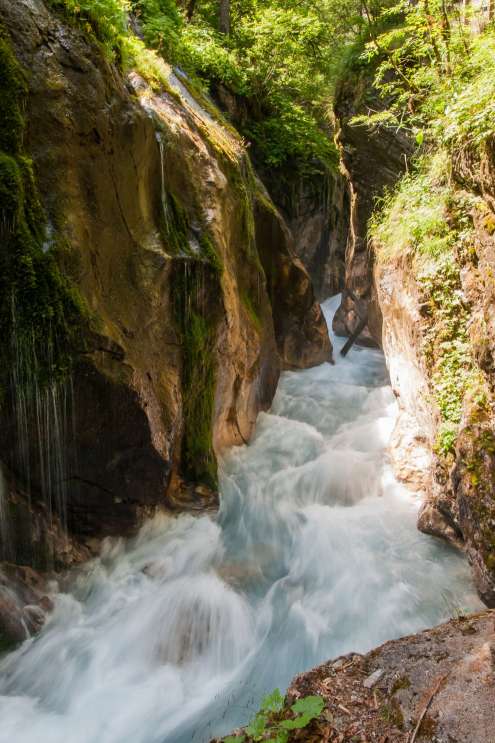 The journey across the ridge between the two cottages will take you 9–10 hours. That is why most people choose the option of sleeping in the Wimbachgrieshütte hut and a complete descent until the next day. Not far from the Wimbachbrücke car park, the paid Wimbachklamm gorge opens, which you are sure to visit on the descent day or so on. Admission is for tokens, which you can buy at a nearby cottage in a vending machine. I also recommend homemade cheeses, which the nice lady will be happy to taste according to your taste. Personally, I was excited about the whole transition, it is especially demanding in terms of its length, but thanks to the scenery on offer, you will sometimes completely forget about it. 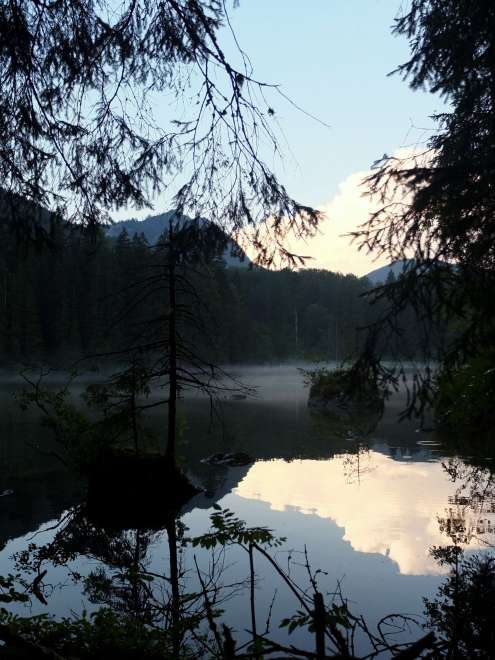 As a night we choose the tried-and-tested Hintersee, where we gain strength for the next day, when we want to return to the Wimbachklamm gorge, around which we walked on the descent to the parking lot at the Wimbachbrücke bridge.

Folk legend about the King of Thieves

The famous view from Berchtesgaden (Watzmann on the right, 2713 m, Watzmannfrau on the left, 2307 m, Watzmannkinder rock teeth among them) is covered by the legend. In ancient times, the country was ruled by the cruel king Zlojíř (Watzmann in German). He was a raw fury who drank blood from his mother's breasts, later loving only hunting. His wife and children were brought up to evil. Day and night, royal hunts took place in the fields, forests and meadows. Hunters chasing game trampled the grain and scattered the herds. One day the king and his retinue hunted on a forest pasture near the shepherd's hut. The king's dog pack tore up the shepherd's dog, bit the shepherd's child, bit the shepherd's throat, and eventually killed the shepherd himself. King Zlojíř laughed terribly. God lost patience, sent a storm to the Berchetsgaden Alps, which frightened the hunting dogs, and they strangled King Zloja, the queen, and their seven children. Their blood flowed into the valley and the dead bodies grew into the rock. To this day, the petrified King Zlojíř stands like a mountain peak, around him his wife and seven children, and deep below, two lakes glisten, into which the blood of cruelters has flowed.

Trip to the gorge Wimbachklamm

Tourist trip to the Hochkönig area 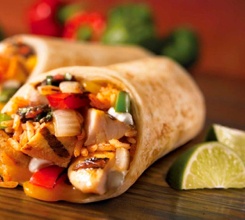 Giga List: The most beautiful places in Salzburg area

In the vicinity of the historic city of Salzburg, there is a very picturesque Alpine landscape with lots of beautiful limestone… continue reading

Berchtesgaden is the easternmost corner of not only Bavaria, but also the whole of Germany. The core is the beautiful… continue reading

Giga List: The most beautiful trips in the Bavarian Alps

The Bavarian Alps are considered the most beautiful part of Germany. You will find mostly limestone mountains, the most famous… continue reading