By bus from Kathmandu to Syabru Besi

Driving along the famous Nepalese road of death

Petr Liška
Wrote 2214 articles and follows him / her 203 travelers
(1 rating)
Car & bus trips
© gigaplaces.com
Suitable for:
Travelers
They been there:

If you want to go on a beautiful Langtang trek, a tiring bus ride awaits you to the starting point in Syabru Besi. The ride takes between 6–9 hours and especially the last part, when driving on an unpaved dirt road high above the valley of the river Trishuli is worth it.

Buses to Langtang leave from Gongabu Bus Station, less than three kilometers north of Thamel at the Ring Road. Buses leave in the direction of Syabru Besi between 6: 30–8: 00. So it is ideal to get here by taxi (just say the Langtang bus, or the Syabru Besi bus, they will know) for about 400–500 rupees from Thamel at six in the morning. A taxi will drop you off right at the ticket office

Although, according to the map, the shortest road to Syabru or Trisuli No. F21 north of Kathmandu is, but buses now run the first 50 kilometers along Prithvi Higway in the direction of Pokhara. Here is the first short stop, after about an hour and a half

In Galchi (450m above sea level), by far the lowest point of this trip, we turn onto the F69 road (Pasang Lhamu Highway) leading up the valley of the great Trishuli river. It can be seen that the road has been reconstructed here – there is a lot of asphalt and sometimes the bus even starts at a higher speed. Not everywhere is done and then you fly to the ceiling of the bus. In this passage are interesting huge raised bridges over the river Trishuli. At the Devighat Bazaar there is a huge confluence of rivers and we cross the Tadi Kholu bridge. There is a lunch break in Trisuli Bazar a few kilometers away

From Trisuli Bazar, the road leads a few kilometers along the bottom of the valley to Betrawati (630 m above sea level), from where endless winding up the hill begins. The road is nice in this section, but you feel as if you are not moving. You can still see the confluence of the rivers in Betrawati deep below you. This whole slope is sunny and very fertile. High on the hill is the largest city in the area – Kalikasthan, where there was also a stop, but only on the way back. The center of this town is located around one of the serpentines

Riding on the balcony above the Trishuli river valley

After the bus rises above two thousand meters above sea level, you are only 30 kilometers from Syabr – but it is still more than two hours drive. Only now does the famous road of death begin, mostly without asphalt, terribly high above the valley floor. Basically, you will drive along the Nepalese contour – above you a forest and below you fertile fields falling to the bottom of the valley. Just a short time after entering the Langtang National Park is the first checkpoint where tourists have to show their passports. 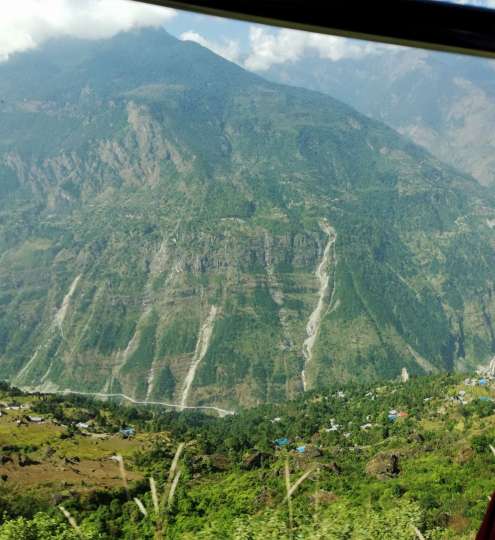 View of the Trishuli Valley

The road is tiring, but the views in the last part are really worth it

The closer you get to Dhunche (the district town in the local Rasuwa district and the former main trekking base), the more the mountain views open up. For the first time you will see Langtang Lirung (7,227 m above sea level) and a little further visited Ganesh mountains

After almost two hours drive from Kalikhastan, you are in Dhunche. This is where the real bureaucratic orgies begin. In front of the city is a large military check post, where every tourist must show a backpack and there is such a cursory tour. They are mainly interested in drones. There were signs saying that filming in Langtang was worth 1000 USD !. At the same time, there is the national park office, where the entrance fee is paid (unless you have already settled it from KTM). In the middle of the city is the second check on TIMS and then the third at the other end on Passport. The only advantage is that there are beautiful mountain views from here

From Dhunche there is a really nice view of Langtang Lirung, which is less than 30 kilometers as the crow flies.

Far on the horizon, you can see the mountains that already belong to China

Just behind Dhunche is another nutritious section of the road, crossing the side valley of Trishuli Khola.

After crossing the side riverbed, only two agricultural villages Thulo Barkhu and Sano Bharkhu are waiting for you, and then the famous zigzags towards the bottom of the valley. Then just cross the bridge and you're there. Congratulate that you survived and at the same time you can admire the driver for whom it is the daily bread