The beginning of the Langtang Trek

Petr Liška
Wrote 2166 articles and follows him / her 195 travelers
(1 rating)
Hiking circuits & Trekking
© gigaplaces.com
Suitable for:
Hikers
They been there:

Langtang Trek Part 1: The beginning of the Langtang trek is in the dusty town of Syabru Bensi, where you get off broken after a many hours drive from Kathmandu. Someone sleeps here before the trek, someone sets out to stretch the body for at least a few kilometers. In the second variant, a good goal is the isolated Domen loggia located less than 5 kilometers from Syabr. The path leads through a green valley with several nice waterfalls.

Syabru Bensi (1,460 m above sea level), the starting point of the Langtang trek. Basically just a dirt road surrounded by several hotels. Possibility to add water and eat at even low prices. There's also a guy here who writes Timsi in a book, both on arrival and departure

View of the confluence of the Trishuli and Langtang Khola rivers

View of the very beginning of the Langtang valley. According to the map, it seems easier and shorter to cross right here over the big bridge, but there are prohibition signs – you have to take a detour through the old Syabru Bensi. When descending to the river, there is also a police check post for the locals, so it probably doesn't pay to risk trying it

Suspension bridge over the river Trishuly

Descending to the raised bridge will take you to the lowest point of the entire trek 1,440 meters above sea level. Not far from the bridge is a crossroads not only to Old Syabru, but also to Khangjim, through which it is ideal to return.

Of course, Old Syabru looks much more pleasant than the new city by the road

Cactuses in the Langtang valley

Thanks to the favorable climate, you will also come across cacti here

The first point of reference is the Tibetan loggia Tiwari, about 3 kilometers from Syabr. Here is also the first time to cross the river

The river valley is picturesque, but in most places without a view, thanks to the narrow valley 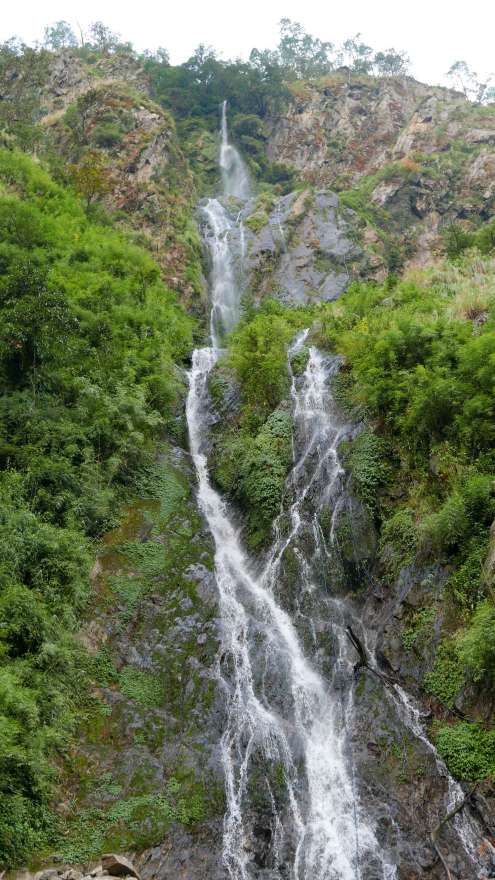 On the trek through the valley of the river Langtang you will meet a number of nice waterfalls, but this one is one of the most beautiful

After crossing the Tibetan loggia to the other side of the river, the road leads along a road built due to an extensive hydro project

In front of Domen

Finally we reach the goal of this short stage – Domain (1,700 m above sea level). The local bridge is damaged by a landslide from the 2015 earthquake.

There is also a beautiful waterfall near Domen, which is probably his only disadvantage. It is very humid and drops of water from the waterfall are flying here, so you won't dry anything here

Sunset over the mountains

There is also a pretty good view of the mountains from Domen. The sunset is really interesting here