Trek through the Nepalese mountain jungle

Petr Liška
Wrote 2176 articles and follows him / her 196 travelers
(1 rating)
Hiking circuits & Trekking
© gigaplaces.com
Suitable for:
Hikers
They been there:

Langtang Trek 2 part: From Domen to Bamboo (2,010m above sea level) it is only three kilometers, but almost 400 altitude meters. Tourists who go Langtang trek slowly, end here their first day of trek (if it comes from Syabru Bensi). However, if you start in the Domain, it is just a warm-up stage for the day. The path leads through a narrow valley filled with lush vegetation with lots of waterfalls. Along the way, a trek across Lake Gosain Kund joins

Right from the Domain, a steep ascent to a rocky promontory above the canyon begins. The first views of the region open up from it.

View of the opposite slope

The opposite slope is not overgrown with jungle, but is quite arid. Almost a kilometer above you is an alternative return route through the mountain villages of Sherpagaon and Khangjim – definitely a recommended option

After about a 15-minute walk from the Domain, you will come across a trekking signpost. If you have more time, it is definitely worth coming here via the lakes of Gosaikunda or returning to Kathmandu via them. The red panda depicted here is a symbol of the national park, and those who are lucky can really meet it here

View of the region

Thanks to the ascent to the promontory, a quite nice view of the region opens up, even though the really beautiful ones will not come until the following days

A nice part of the canyon is in front of the loggias in Pair (1,750 m above sea level), another possible accommodation option. There is also a hotspring marked on the edge of the river, but we didn't try 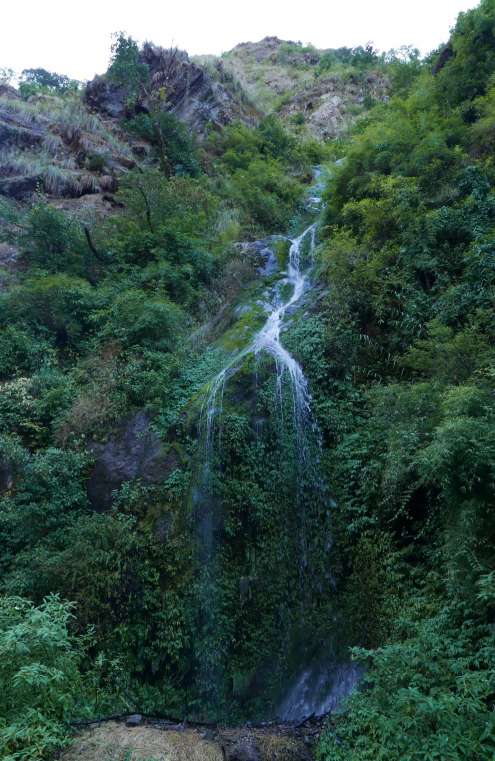 A small waterfall in front of Pairo

You will also pass one of the smaller waterfalls

From Pairo you can also see the village of Thulo Syabru (2,200 m above sea level) situated on a large rocky promontory above the river Langtang Khola. Via Thulo, the road leads to Gosainkunda

Behind Pairo and then at several other places on the trek you will see, if you look closely at the rock overhangs, the huge honeycombs of Nepalese wild bees. This honey is very valuable and also expensive

On the trek you will meet not only western tourists, porters and guides, students from Kathmandu, but also locals for whom the local trails are the daily bread

The opposite, sunny slope is significantly arid, but there are also waterfalls. This trek is quite rich in them

Porter – ordinary, very hard and not very well paid job in the Nepalese mountains. You will often be amazed at what these scantily clad men are capable of carrying

After less than two hours of walking from the Domain, Bamboo – which is a larger set of loggias – will appear in front of you, right by the roaring river.

Bamboo is quite a picturesque place thanks to the river, but for the vast majority of tourists it is quite a short walk here and they continue to the Lama Hotel