Leontýna Novak
Wrote 11 articles and follows him / her 4 travelers
(1 rating)
One Day Trips The most beautiful places
© gigaplaces.com
Suitable for:
Families with children
They been there:
They want there:

Austria – Attersee, travel through Slovenia from the mountains to the sea and a trip to the lakes in Italy

Slovenia – it's so beautiful there :)… I was here for the first time in 2015, when my friends and I went on a trip to Triglav, Mangart, looked at Bled, Bohinj, the Vintgar gorge and the Savica waterfall. But there is so much to see in Slovenia, so this year we organized a family trip to see as much as possible. We had 6 days to do it. We start the trip by leaving the Czech Republic early in the morning. The road leads first to Austria to Lake Attersee. We stayed in Weißenbach am Attersee in the Europacamp camp / 36 euros for 4 people per night in total /. In the afternoon on a hot summer day, we set out to look at the lake from the hill called Schoberstein. The red sign led directly from the campsite.

we are looking for a camp – swans welcome us

The red sign leads directly from the kepm, climbing the hill, we sometimes shortened the paved sidewalks. We bypassed Kleiner Schoberstein and headed for Grosser Schoberstein, a hiking trail with a pair of steel ropes to hold at the top.

we better stick with it :-)

Views of the Attersee

summer too hot day, but the views were worth it …

evening at the lake

The road leads us around Mondsee

..by the way from Attersee to Slovenia

Early in the morning wake up and we have a crossing in the direction of Slovenia via Villach and Kranjská Gora / about 2 and a half hours – along the way we were forced to pay on the highway 12euro toll /. Here we have another stop at Lake Jasna, a walk around the lake and very good ice cream will hold us back for a while and we continue in the direction of the village of Mojstrana, where we turn to Triglavská cesta, where we park after about 5 minutes in a small parking lot under the Peričnik waterfall. From the parking lot we climb about 400 meters uphill through the forest to the waterfall – everything is well marked. The waterfall can be walked. Unfortunately, we were caught by a storm and rain, so we canceled the planned continuation to the Alaska House.

transfer from Austria to Slovenia 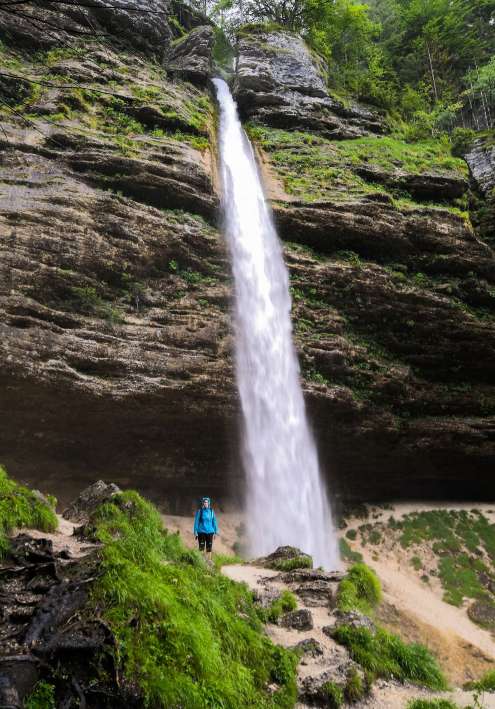 … unfortunately it rains here, so we don't stay long, we run to the car in a storm ..

From the waterfall we continued to look at lakes Bled and Bohinj. I know from the last trip that there is a possible trip to the Vintgar gorge and the Savica waterfall on Lake Bohinj … but there are a lot of people in Vintgar and Savica and there is also a waterfall behind the fence, so I was not attracted to these places … and more The weather is not good for us now this afternoon, so we did not undertake camping near Bohinj, and even though it was later in the afternoon, they decided to move to the sea.

..sure there are a lot of possible trips around the lake, but we made only a small stop …

.. it's raining for us .. we therefore cross from Bohinj to the sea, where it is pleasant 30 degrees and the sun …

I know about the sea here that Slovenia has perhaps only 50 km, and there are a lot of city beaches … we also visited them, but those people, nothing to me. I found a camp that belonged to a hotel in the town of Izola. We had to walk a short distance to the sea, descend from the cliff, but we didn't mind. In the afternoon we drove a little further to look at the city beaches in the town of Portorož and then we took a walk in the town of Piran, where we tasted pizza. Burning from the sun, after two nights spent in Izola in the camp, we left in the direction of Bovec.

Izola - way to the beach

..walking down the cliff ..

..beach under the camp …

..beautiful town on the coast

In the morning we leave in the direction of Bovec / about 2 hours of travel /. On the way we have a stop near the town of Kobarid, we park in a paid parking lot near the Koren campsite by the river Soča and set off in the direction of the Kozjak waterfall. The road leads through the forest and there is a lot of tunnels from the First World War. This makes the journey interesting. We will not get to the waterfall down into the water .. there is a view of it from a wooden footbridge, which I'm a little sorry, but the waterfall is beautiful. Admission is charged at 4 euros. The journey to the waterfall took us about 1 hour. After returning, we continue to Bovec and park at such I would say the settlement of Plužna and meet the next waterfall Virje … there are quite a few people bathing, but cold water :-) … We found accommodation in Bovec camp Polovnik.

around the river Soča the road leads to the waterfall Kozjak 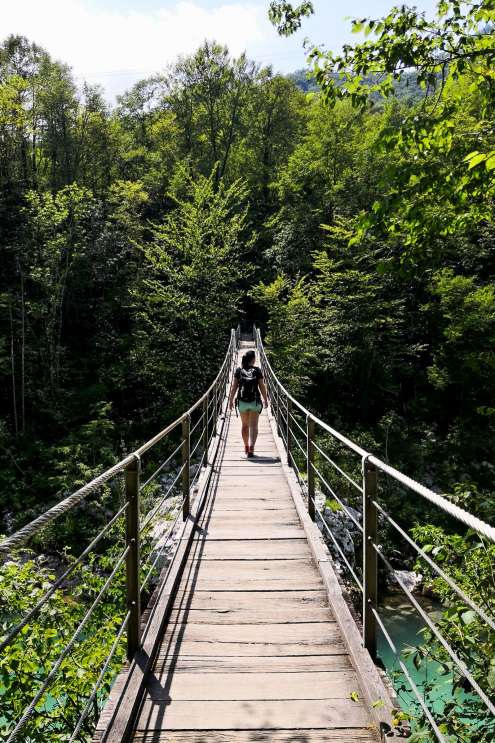 .. one of the bridges on the river Soča

On the way to the waterfall Kozjak

through the forest and around Soča

beautiful place, but a lot of people – to take a photo without them was quite a nut: D

The next morning, a trip by car was planned to Mangartské sedlo – from there to Italy to Lake Predil and Fusine. Unfortunately, the road is closed to the Mangart saddle by the police, later we learned that a large boulder had fallen somewhere in the serpentines and the road was not passable. So we continue to Italy to the lakes Laghi di Fusine. It is beautiful. We take a walk from one lake to another. We have a lot of time and that's why we planned another trip across the Vršič saddle back to the camp. Beautiful views, in the saddle we go to walk around Tičar Lodge to another „cottage“ Postman's Lodge, where we find out that the peak Vršič 1737 m above sea level we have only 10 minutes … so hrr on it! In the evening we return to the camp, our vacation is getting shorter and it also rains … we have a beer in the local restaurant..and we are surprised to see Staropramen spinning here. In the morning we pack up and leave again in the same way as the previous day to Mangartské sedlo – I'm not very good at those serpentines. Beautiful views, clouds rolling here .. a few photos and the adrenaline road back, another direction to Italy and Lake Lago del Predil and home.

..walking around the lake

On the way to Vršič

sheep … there were a lot of them

To the top of Vršič

Back to the car

..and back to Bovec

..one pass the car park on the way and further, just like years ago, there is a sign with a ban on entry, which, of course, almost everyone passes and exits to the upper parking lot

..photos in the clouds

The last stop at the lake in Italy

Author: Leontýna Novak © gigaplaces.com
Applaud the author of the article!
Share it on: