Mountain on the border of three states

Petr Liška
Wrote 2176 articles and follows him / her 196 travelers
Hiking Mountains
© gigaplaces.com
Suitable for:
Hikers
They been there:
They want there:

Most tourists come to National Park Mgahinga because of the very rare mountain gorillas. But you can also hike here on the local volcanoes. Although the highest mountain in the National Park is four thousand high Mount Muhabura (4 127 m asl), far more popular ascent is to Sabyinyo (3 645 m asl), whose peak lies directly on the border of three countries: Uganda, Rwanda and DRC Congo. During the ascent you will enjoy beautiful sceneries looking into all three states and also lush vegetation on the slopes of this mountain.

Sabyinyo from the visitor center

You shall always set out for the hike to Sabyinyo early in the morning. It is similar if you go to observe gorillas to the National Park. The driver will pick you up after the sixth in the morning in Kisoro (1 920 m asl) and will take you through agricultural landscape to the visitor center Ntebeko (2 340 m asl). From here you can already see volcano Sabyinyo towering on the horizon.

Everything takes very long time (african style J) in the visitor center – before they open, find a guide (compulsory is guide + security guard equipped with AK-47 (Kalashnikov) reportedly because of the wild animals), before you sign to the guestbook etc. So if you are just four, even so you will be accompanied by three-member escort.

The first part of the journey is probably the least entertaining – walk along the plain overgrown with shrubs and small trees, where villagers previously worked on the land before they were expelled after the establishment of the park. The local volcanic soil is fertile, so virtually everything except for the park is cultivated. You will then walk in bamboo forests before you come to lichen forest after two hours, which is already far more interesting.

During the ascent you will sometimes see two neighboring volcanoes – Gahinga and the highest Muhabura through the „window“ in the mountain lichen forest.

The ascent to the volcano Sabyinyo

The ascent leads on steeper and muddier sections on wooden ladders of various sizes. To the right you will have more and more „parachute“ view into the abyss of a former crater. The slopes of this ancient volcano are completely green, which looks quite picturesque.

View of Sabyinyo from the neighboring to

The first proper outlook is from the top before it, where tourists end their trip to the mountain, if they have worse physical condition or bad luck for weather. From here you can already see the top itself and the most demanding part of the ascent in a steep slope leading on the wooden ladders most of the time. Here it is the perfect place to gather strength and admire the views.

From the top before Sabyinyo it is almost hourly ascent mainly on the ladders of varying quality. It is quite risky in bad weather.

You will enjoy not only beautiful views, but also an interesting high mountain endemic vegetation during this ascent.

During the ascent on the ladders you can enjoy or even be slightly afraid of looking straight down. You will see basically your entire ascent from the bottom of the gorge (about 600 vertical meters below you) along the ridge up to the top before Sabyinyo, small descend to a pass and this final ascent.

As with other volcanoes, where crater fell in the distant past, also here in Sabyinyo remained sharp vertical walls.

The top Sabyinyo is very pleasant place in nice weather. You can sit here and admire the views of all three countries around. Unfortunately, local weather is quite volatile and the peaks are more time in clouds rather than uncovered.

Rwanda is unlike Congo densely populated. You can nicely see the boundaries of the national park. Right behind them is a highly populated agricultural landscape.

Descent down is a little quicker, but climbing the ladders is very unpleasant.

Author: Jaroslav Málek © gigaplaces.com
Applaud the author of the article!
Share it on:

The road from Fort Portal to NP Semuliky

Tour of Kenya, Uganda and Tanzania 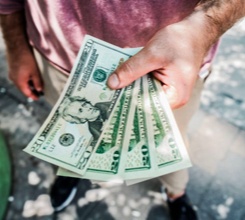 If you are already going to Equatorial Africa and you have about three weeks of time, it is not wrong to make a circuit around… continue reading

Giga List: The most beautiful trips to the southwest of Uganda

Southwest Uganda offers the best you can visit in this country. High mountains, volcanoes and beautiful national parks allow you… continue reading