Ascent to Smrk and Klínový vrch

Circuit through the highest peak of the Jizera Mountains

Jiří Šmejkal
Wrote 27 articles and follows him / her 2 travelers
(1 rating)
One day Hikes
© gigaplaces.com
They been there:
They want there:

The subtitle of the article is a bit misleading, as Smrk is not the highest peak of the Jizera Mountains, but only their Czech part. However, thanks to the lookout tower, the highest point at the top of Smrk is where you can climb in the Jizera Mountains. In addition to Smrk, we will visit several other, lesser-known peaks as well as the spring of the Jizera. The circuit is about 24 km long and takes about 9 hours. It is possible to shorten it significantly, but at the cost of losing some beautiful places that are definitely worth a visit.

The circuit begins and ends at the crossroads of Bílý potok, at the bridge over the Smědá river, which separates Hejnice and the neighboring settlement of Bílý Potok. Following the yellow trail, we will walk almost through the entire Bílý stream, until we finally dive into the forest at Bartlova bouda. A comfortable, but quite steeply ascending path leads us around Hájený stream, whose riverbed is full of large boulders. After the road deviates from the stream, its surface radically deteriorates and climbs perhaps even steeper to the first stop, Paličník.

Paličník (944 m above sea level) is formed by a system of several rocks, while on the most massive one there is a lookout point equipped with a metal railing. It has a beautiful view of the valleys of Hejnice and Bílý Potok, as well as the northern slopes of the Jizera Mountains, the Frýdlant battlements, Smědavská mountain and today's main destination, Smrk.

From Paličník we continue to the crossroads Pod Klínovým vrchem, where the yellow sign ends. We will connect to the blue one, but after about 100 meters we will leave it again and soon we will reach the top of Klínový vrch (972 m above sea level) in an unmarked way. Not far from the top, Pytlácká skála rises alone, which is quite easy to climb and from which other great views open up to us.

Another hill, at the top of which there is a distinctive rock, is Zelený kámen (933 m above sea level). Surprisingly, there is no marked path to it either. From Klínový vrch we descend to the Předěl crossroads, where several marked paths meet. We will choose the red one leading east (if you want to shorten the hike, you can go straight in the opposite direction to Smrk). We leave it again at the first crossroads and ascend the asphalt Spruce Road to the saddle between Zelený kamen and Plochový vrch. Here we turn left onto a footpath that will lead us to the Green Stone.

View from the Green Stone

From the top of the rock we can again enjoy another circular view. In addition to Smrk, we will also see Jizerka with a characteristic pair of rocks on its top, Smědavská mountain, Černý vrch, Jelení stráň and a number of other hills. Among them is the indistinct Flat Hill, where our next steps will lead.

In the same way we return to the saddle, cross the asphalt road, continue straight and slowly climb among the young trees. This time there is no rock on the top plateau, but there is a waterlogged meadow, a highland. It is a relatively unique locality, because, unlike other highlands in the Jizera Mountains, it is fed only by precipitation. Which is one of the reasons why it is protected as a natural monument with a somewhat strange name Quarré. The highest point of Plochý vrch (939 m above sea level) is located just beyond the PP border.

The source of the Jizera

From Plochý vrch we descend to the Předěl crossroads and follow the red road in the direction of Smrk. The road leads along the asphalt and is not very lively for the hiker. It is possible to continue along it to the Heavenly Ladder, but it is more interesting about 350 meters behind the Na Písčinách crossroads to turn right onto an unmarked path and join the Fork Road, which will also lead us to the Heavenly Ladder and as a bonus offers a short detour to the Czech spring Jizera.

The celestial ladder is the name given to the steepest section of the ascent to the top of Smrk. It is approximately 600 meters long and overcomes an elevation gain of almost 160 meters. For the most part, we walk along a rocky footpath, which is followed by a wooden walkway in the upper part. 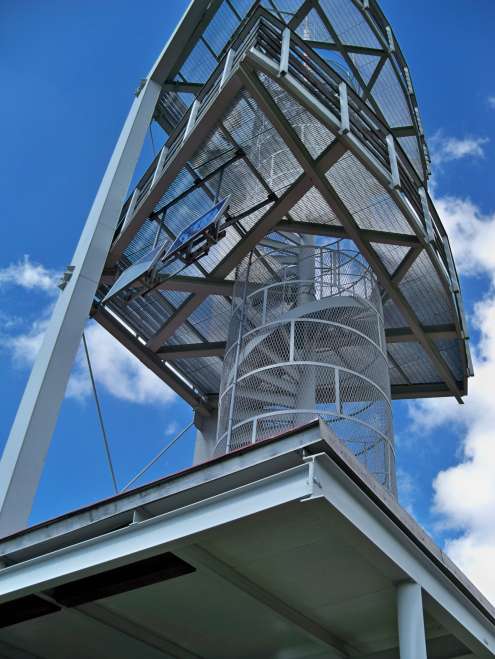 After that, there are only a few hundred meters of gentler ascent left and we are finally at the top of Smrk (1,124 m above sea level). The dominant feature of the peak visible from afar is the freely accessible lookout tower, which also includes a tourist shelter.

The lookout tower offers an almost aerial view not only of the Jizera Mountains, but also of the Giant Mountains, Ještěd, the Lusatian Mountains, Ralsko, etc. And, of course, also of Poland to its vast plains.

From the lookout tower we continue to the Smrk crossroads, where we turn left onto the blue road. After approximately five hundred meters, we turn left again onto an unmarked path leading along the western slope of Smrk, from which other beautiful views open up. Soon we will connect to the Tower Trail, which will lead us almost in a straight line to the crossroads of Tišina. But don't be fooled by the fact that the paved road turns right after some four hundred meters and keep going straight. Although in the next section you may feel like you are on an obstacle course (the path is often interrupted by „dams“ slowing down the outflow of water during the rain), but otherwise you would prolong the journey by a kilometer.

Approximately 250 meters from the crossroads, next to the road among the trees, there is a hidden rock, whose name the crossroads took over. However, the view from it is considerably limited, especially during the growing season.

The last stop is the Hubertka cottage, which also offers refreshments, to which a red sign will lead us. From it there is a short turn to another rock formation – Kočičí kameny. We can get to its top comfortably by carved stairs or somewhat less comfortably by a simple ferrata. From the top there is a nice view of the Hejnice valley and the opposite slopes and peaks of the Jizera Mountains (Frýdlantské cimbuří, Holubník, Smědavská hora and others).

And in the end, all that remains is to run the last about 2.5 km down the blue and we are back at the crossroads of Bílý potok, from where we left in the morning. Just watch out for cyclists, the hiking trail is crossed in several places by a single track route and not every cyclist is a model of consideration for others.

Author: Jiří Šmejkal © gigaplaces.com
Applaud the author of the article!
Share it on:

Across the Jizera Mountains

Ascent to Jizera and Smědavská hora

A walk through the views over Albrechtice

Giga List: The most beautiful hikes in the Jizera Mountains

The Jizera Mountains offer not only cross-country skiing in winter and bicycles in summer, but also countless beautiful tours and… continue reading