This article could also be called how to „hang a bag“ on a light four thousand, in this case Nadelhorn, we were cruelly frozen there. However, the original plan was far more ambitious – the traverse of the Lenzspitze ridge – Nadelhorn, it did not take place, fresh snow fell. But we enjoyed further climbing, including the great views, which are always guaranteed in Wallis. Beginning of August 2019.

Accommodation in the Saas Grund camp; it is already such a classic, the camp is well equipped, you can also reasonably park your car here. And the first day we go to the Allalinhorn (4,027 m), the ideal acclimatization hill, we have been going there several times. This time we were tempted to try it north (difficulty AD), that is „on ice axes“ directly from the station Mittel Allalin, but there were no clues, so we did not want to go there. So we took it with the crowds (mostly one-time four-thousand-meter tourists with guides) as normal, but it was nice.

From Mittel Allalin Metro Station, it is half a mile to the top. Ascent is easy.

After descending from Allalinhorn to the Feejoch saddle, we decided to climb a little more and set off along the ridge to Feechopf (3888 m). 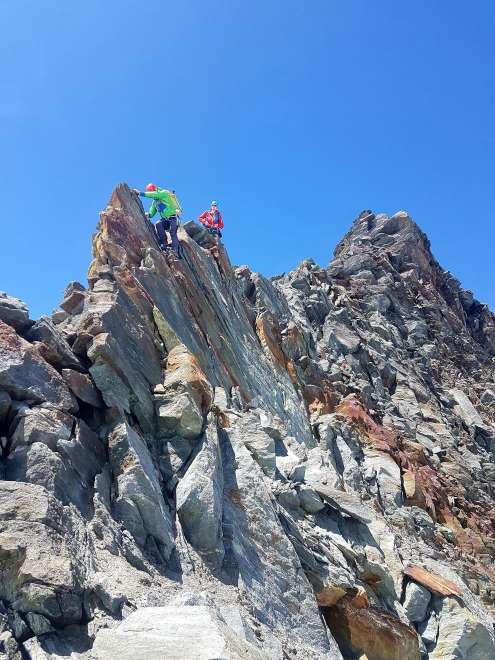 Climbing is not difficult (classification PD +, II), but the comb does not hold too much, it is good to try each stone before you grab it. We climbed with continuous protection, back from the top without protection. On the way to the top we enjoyed the views of Alphubel, Täschhorn and Dom. Saas-Fee was deep below us. 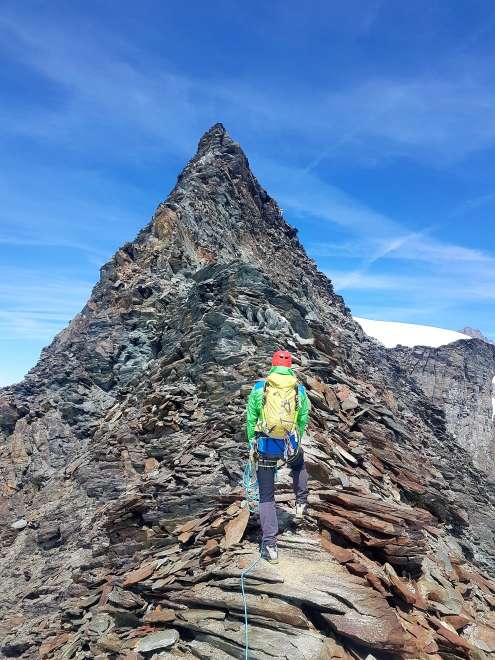 The glacier, which peeks out from the top of Feechopf, leads to Alphubel (4,206 m). From here, however, it is still a half-day hike to him. 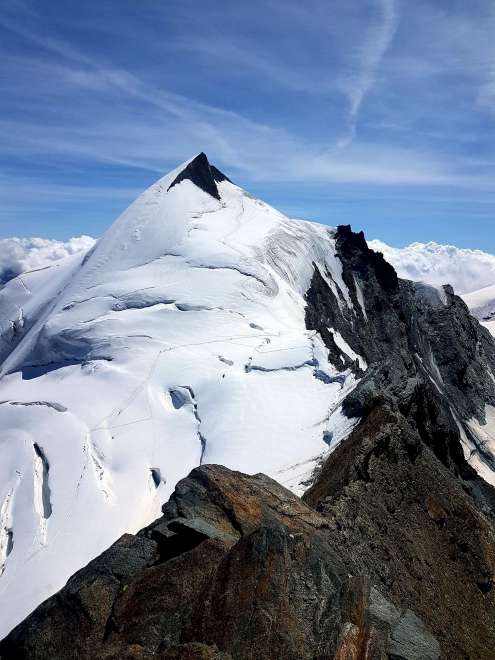 The picture shows a normal view of the Allalinhorn, surprisingly without people. Altitude is already showing, we are starting to have a headache, it is simply necessary to acclimatize. At the top of Feechopf is a pole through which one can descend. The whole turn around the ridge back and forth did not take us more than three hours.

The forecast promised persistent rain, this day was supposed to be completely relaxing, we just needed to move 1200 meters up to the cottage Mischabel. We tried to plan the ascent to the cottage until the morning time gap, when it looked the most feasible, but it completely failed, on the way we got wet, dried up and got wet again. The path leads for the most part on a rock secured by a ferrata, but even more able tourists can handle it. The chalet stands directly on the rock and offers fantastic views of the Saas-Fee valley and the surrounding mountains. We arrived around noon. Blizzing began in the afternoon. I hope it doesn't occur much, we hoped. The next two days should be clear and it would be a shame not to use them. We have already given up the Lenzspitze (4,294 m) with the traverse to the Nadelhorn (4,327 m) under these conditions; also the attentive staff at the cottage discouraged all newcomers from the idea. However, the Nadelhorn alone could be managed and possibly other lighter peaks behind it – Stecknadelhorn (4,241 m) and Hochberghorn (4,219 m). 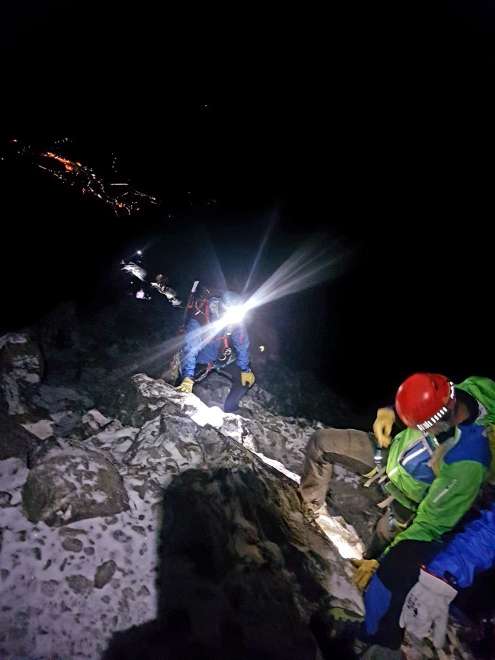 Above the Mischabel hut, below us in the distance, the night Saas-Fee

In the morning, wake up at a quarter to four, at half past three breakfast is prepared at the cottage. It starts straight from the hut to the rock, first you need to reach the Schwarzhorn (3,620 m), then the road divides – turn left onto the Lenzspitze along the ridge, turn right onto the glacier to the Nadelhorn. The rising ridge is lined with headlamp lights, we join them. It's easy climbing, literally a path in places, but it smiles nicely, the rock is frozen and covered with snow. At Schwarzhorn we are rearmed into cats and we connect to the rope, we are happy that we managed to speed up the maneuver and we get in front of two groups. Downtime on the glacier, especially when you tap the scythe, is not good. 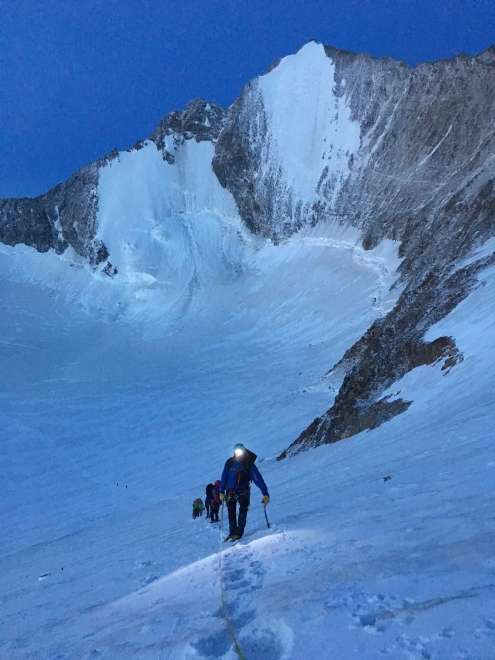 We crossed the Hochbalm glacier, behind us you can see the Lenzspitze ridge, as sharp as a razor blade. It's getting dawn, the road is going well. It's really such an easy hike, I think, we'll be on top at eight, as we planned. When climbing, it is probably the most difficult to adjust the speed of the rope team, it is usually not a problem until one needs to go faster, because he is cold, while the other needs to exhale. 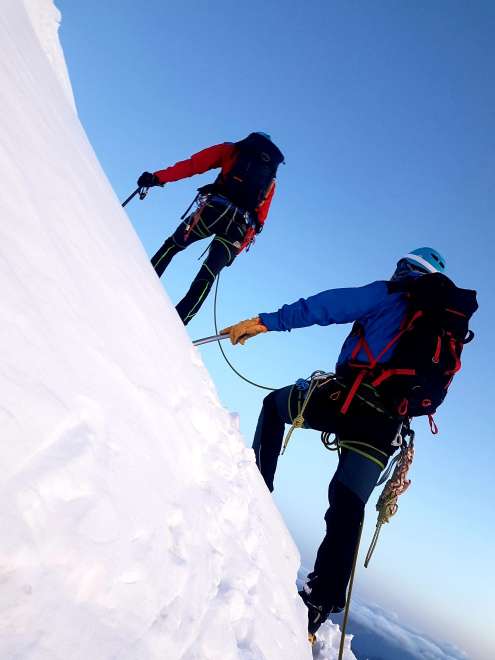 We get on the fir ridge, which is already the final before the very top, and such a gust of wind rests on us that all of a sudden all the peace is gone.

Ascent to Nadelhorn, the sun rising behind us

We try to keep a smile, but the thumb is rather down. The faster ones disconnect from the rope in a while, there are no cracks here anyway and it is not necessary to go in a team, because you really can't wait. The cold permeates me through and through the hood through the helmet, the ice ax in my hand is terribly cold, although I have gloves, the wind is getting stronger and stronger. But without the rope, things go much better and the top is really as if you can't see it. I come to Peter, our youngest member, who has a strange grimace on his face. What is? I'm asking. I can't feel my toes, he says, I haven't felt my toes at all in a while. We go downstairs immediately, I hear me saying, I'm going with you, I'm terribly cold anyway. He thinks for a second, but then he literally runs downstairs, Radek and Rosta also turned around and about half of the people said that day. Tomas continues up to the top. Beneath the Windjoch saddle is finally a lee, Peter running up and down, back and forth to move his legs. It's better? I'm asking. Not really. Come on, we're rolling in the cottage.

We descend the glacier, it's not even eight o'clock in the morning. We are without a rope, but the cracks are slow and the surface is frozen. There is not much risk to go without a rope, we still have no choice. Radek and Rosta will wait for Tomáš when they go, the snow will be melted, they will need the rope. There is no need to stretch the drama any further, my toes on the rocks in front of the cottage thawed, I had a cold as a beam for the rest of my stay, Tomáš looked at the top.

Chalet Mischabel can be seen at the very bottom of the picture in the clouds. We descended that day still down into the valley, in Saas-Fee it was hot to fall.

In the morning by cable car to Hochsaas, from here descent below Jegihorn, on the way across the stream and with views of the group of four thousand – from left: Dufourspitze, Nordend, Strahlhorn, Allalinhorn (behind it forging Rimpfischhorn), Alphubel and then four peaks: Täschhorn, Dom, Lenzspitze and Nadelhorn. 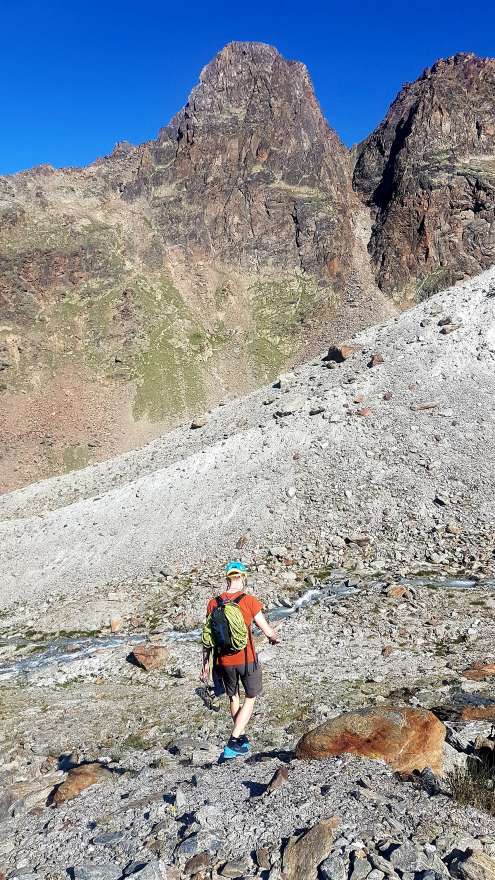 A ferrata and several climbing routes, also a normal path, lead to Jegihorn, but you can also jump over rocks here and there. The road leads from the Weissmieshütte, to which we did not want to descend, so we climbed the rubble fields instead. Last July, there was snow everywhere. 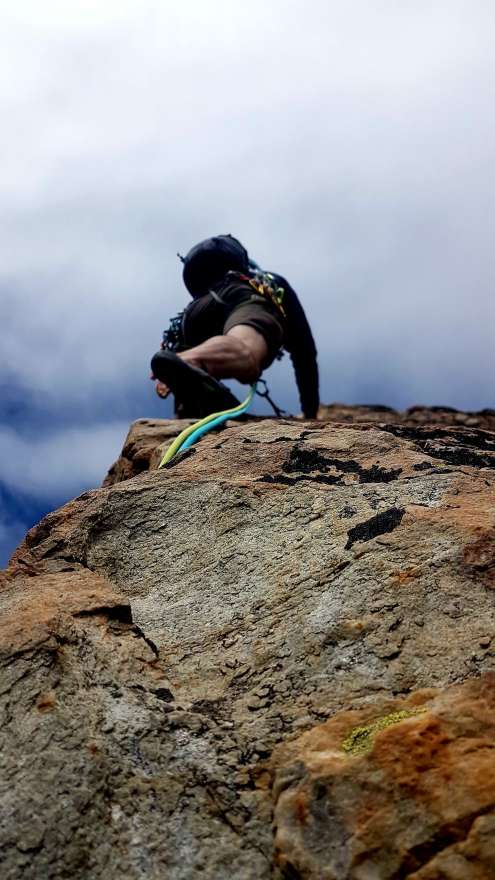 Climbing multi-length Sudgrat (difficulty 5a +) is well unlocked, the stands are after about twenty meters or less, due to the fact that we had two sixty-meter halves, we missed some stands. The climbing went smoothly, we took turns pulling, it was a pleasure, the sun was burning, but the wind was blowing. In total, it took us about 4 hours to get up. Video: https://vimeo.com/352434280?… 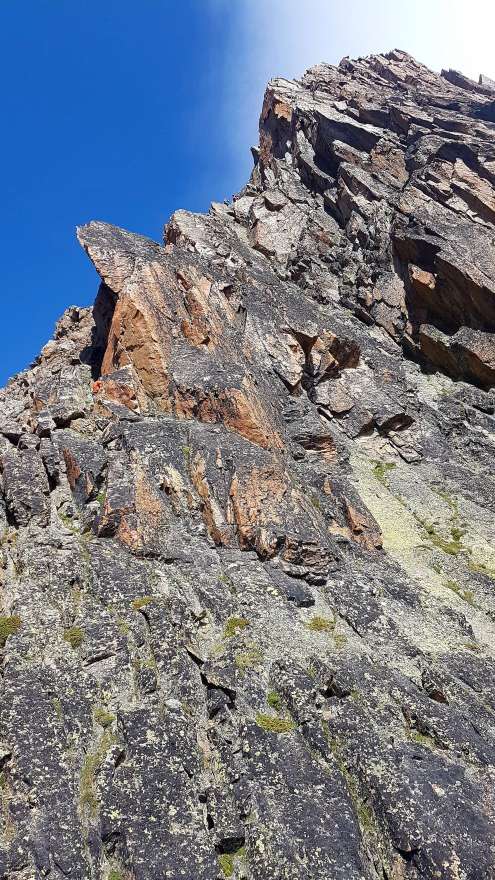 The rock holds perfectly and takes great. People walked around us and next to it from Alpendurst (the most famous climbing route) there were occasional calls in Czech. 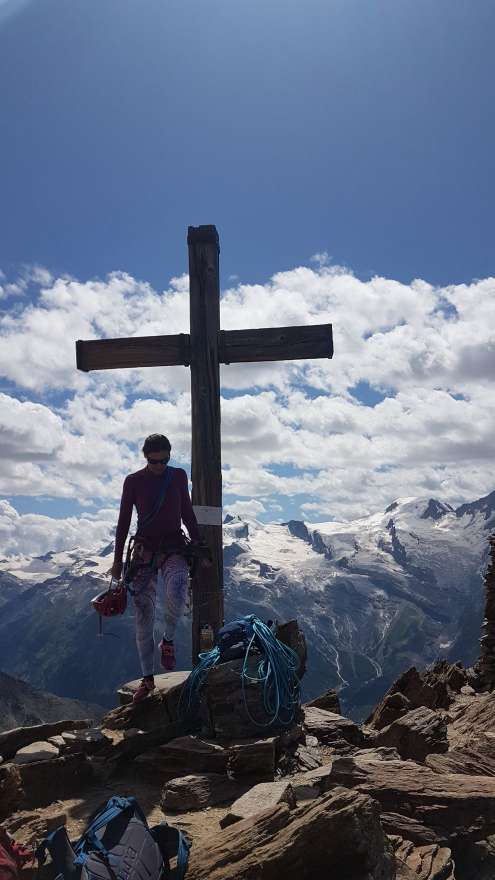 Quick top photo and erase down to catch the last cable car. Along the way, I learned, „You're the first fellow climber to complain or make excuses.“ No one has cut such a compliment for me in a long time.