With its height of 4545 m, the house is the highest mountain of the Mischabel massif, which lies above the Swiss town of Saas-Fee. Ideally, you need three days to climb it, and you climb over 3,000 meters in height. We walked it along the Festigrat mix ridge and experienced 50 km/h winds at the top. 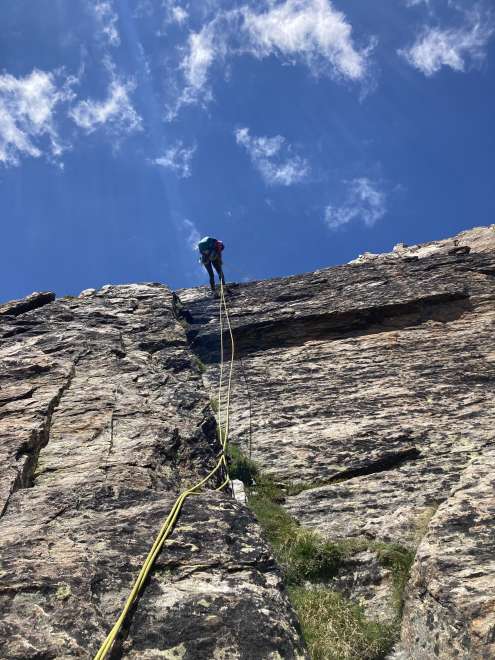 The whole expedition – two people – already started on the Austrian Watzmann (2712 m), which could be considered a bit of a climb, and ended with a half-day climb in Frankejura, Germany. Due to the small number of members, our group was highly flexible in terms of scheduling due to changing weather and overall well-coordinated. The original idea – to climb (and acclimatize) on Weissmies (4023 m) fell through because it rained all Monday. The subsequent multi-pitch climb on Jegihorn (3206 m) took place on Tuesday, but we were forced to abseil from the beginning of the fourth pitch because of the people above us.

View of the Dom from Jegihorn 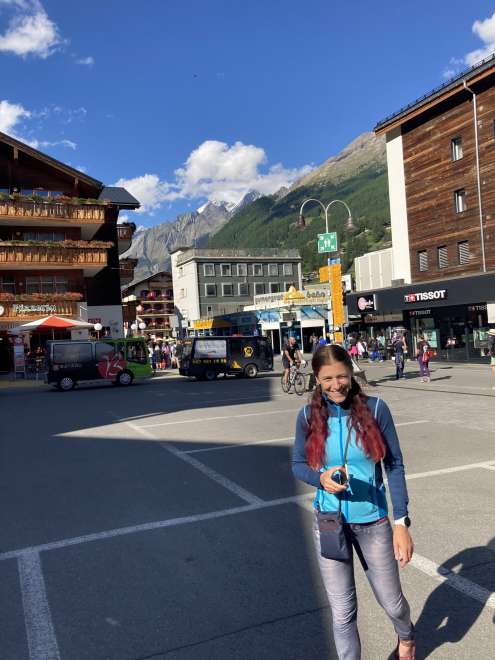 View of the House from Zermatt

Dom is accessed from Randy Valley…

The ascent to Dom starts from the Randy valley and it is good to have three days for it (including the descent). The Domhütte hut (2945 m above sea level) is a 1500 m elevation gain and you can get there in three to four hours. The path is partially secured by a climbing wall, which is especially useful when descending.

Climbing the crest and dawn. Behind you can see the massive Weisshorn (4505 m), which you can't stop looking at. We got up at half past three and in the dark completed the lower part of the ascent of the Festigletscher glacier and the ascent to the Festijoch saddle (3723 m) – a double climb that is not at all difficult, but on the way back there are three abseils. The other groups head to the Hobärg glacier, where they head towards the Nadelhorn and along the long detour along the northern glacier wall to the summit – we follow the crest, which is shorter, but the ascent up it is more demanding. 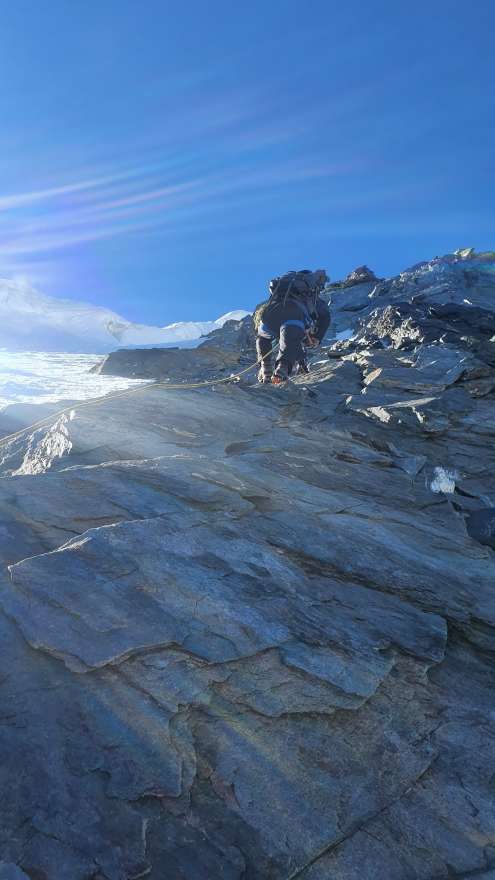 The comb holds well at the bottom, it's worse at the top. We proceed quite briskly, we do not belay, the rope is mainly „for morale“. 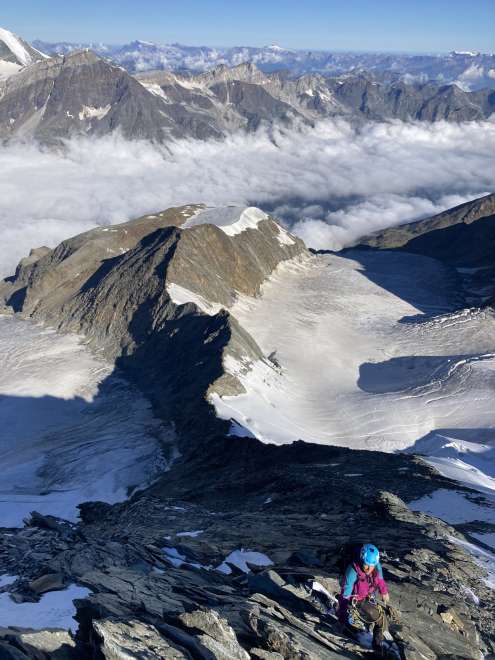 The clouds are below us and moving up. The greater part of the ridge is behind us, but we are far from the top 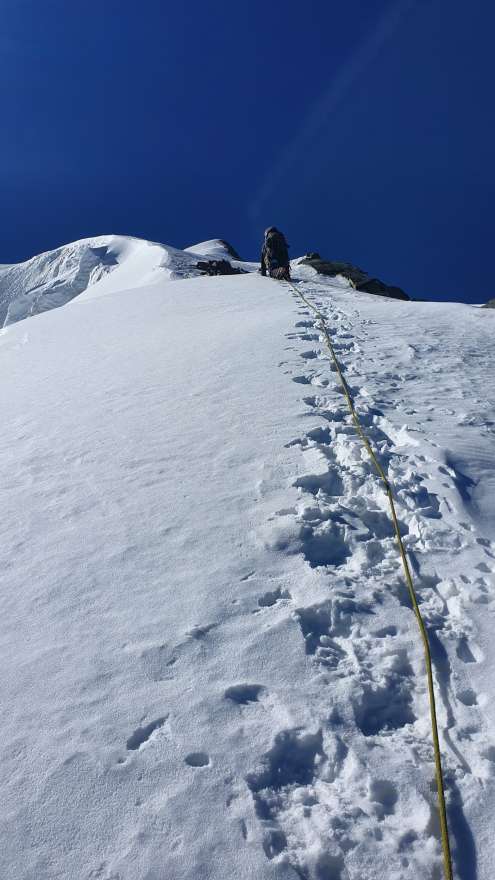 It's still clear, but the wind is picking up. We have reached the top in a stone's throw, but these top passages have delayed us the most. We tried to continuously secure the icy places by covering them with stones. The views of the valley are truly perfect.

Although there is a smile in the photo, the wind is blowing around us, suitable for very sporty yachting (25 kn). The final descent to the ice ax from the Gabel saddle (also referred to as Pt 4,479 m) was not much in the reduced visibility, the stepped steps were a wonder. „A quick selfie and we're off“ we agreed wordlessly. It's a little after twelve, we wanted to be here earlier.

Descent panorama at the end

We don't have a single photo of the Hobärg glacier, because you couldn't see places within walking distance. However, the normal down went by quickly. The picture shows the Festi glacier and in the left third of the rock (where the snow begins) the place where you climb to the Festijoch pass. The top of the House cannot be seen from here. We still have 500 meters of descent to the cottage. The total elevation gain per day is 1,630 meters.

Panorama at the end

A panorama at the end and at least something a little green. Weisshorn, Matterhorn, Monte Rosa and Mischabelgruppe in the shot.

Author: Martin Lucký © gigaplaces.com
Applaud the author of the article!
Share it on:

Hikes and mountain ascents in the Valais Alps