To the valley of Janca pampa

AlpamayoBC Trek 6: From the lagoons Safuna await you the long walk through the valley of Tayapampa and then in the direction of the latest high pass on this trek – Yanacon (4 610 m asl) and farther into wide valley Jancapampa. Here you need to decide whether you end this trek by descending into Pomabamba or extend it and make the entire walk around the entire massif of Alpamayo. Compared to the previous stages is this day a little less interesting.

Morning below the lagoons Safuna

Before you set out for a trek towards the pass Yanacon, say goodbye with beautiful views of the massif Pucajirca and Alpamayo for the last time. 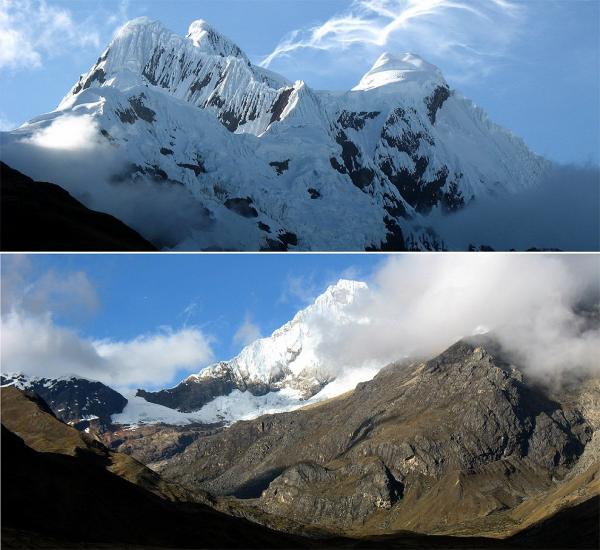 In front of settlement Huillca

The first annoying thing on the walk is the need to wade the river. The way itself along a wide path through flat valley goes by quickly, so in 45 minutes you are already in sight of agricultural lonely settlement Huillca. In front of you rises unnamed mountain (4 512 m asl) at the junction of valleys. 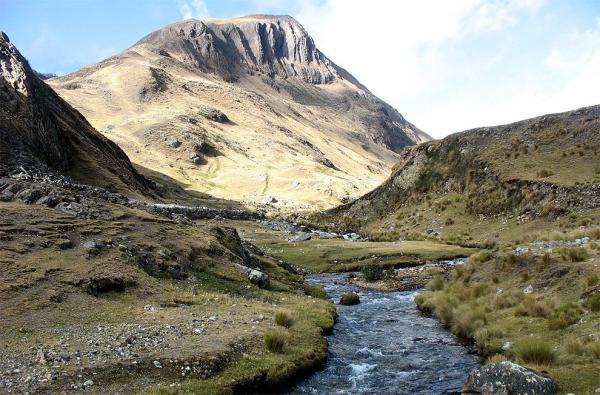 The lonely „settlement“ Huillca (3 998 m asl) looks from the map as a village, so you can imagine that you will be able to buy something to eat here. But in fact, it is only one house with a fence for sheep. Around are pigs and maybe you will see a man after a few days. 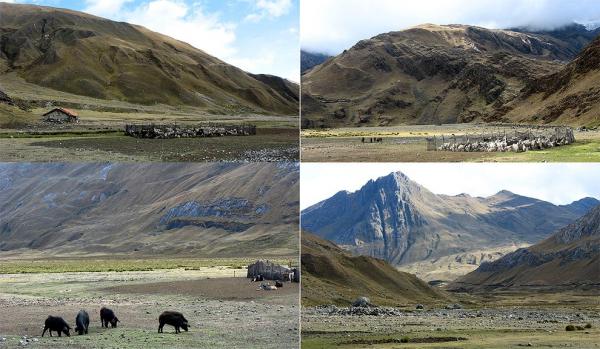 Further continuation of the journey from Huillca may seem at first glance a bit confusing because of the confluence of three valleys in such a small place. But just look in the map and you will definitely find the right direction – walk through the valley in the middle in the west direction. At the end of pampa is another solitaire building, a little bit like from horror – around lye sheep skins and skeletons and at the house is nailed severed cow's head. 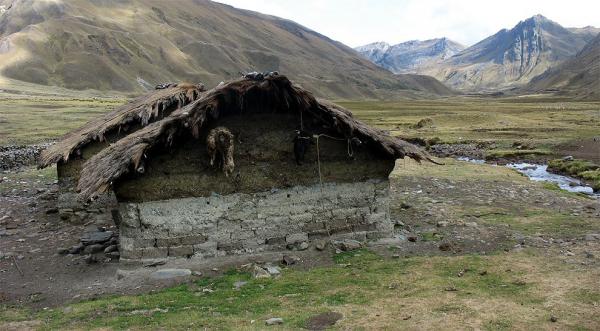 Further on leads the ascent already through very narrow canyon and in front of you rises fifth pass on this trek – Yanacon. From the distance it looks quite formidable, very sharply. 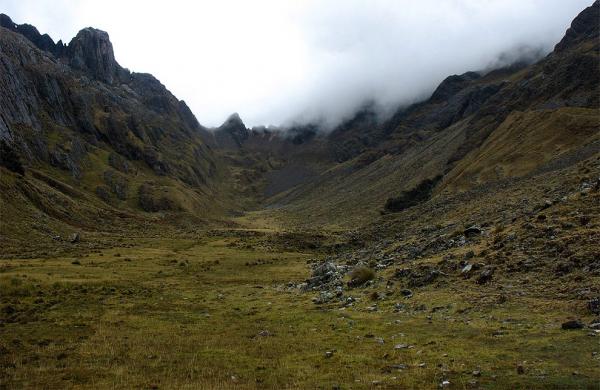 Ascent to the pass Yanacon

The ascent itself is not as bad as it seemed from the bottom, but the height of 400 altitude meters will certainly be difficult. 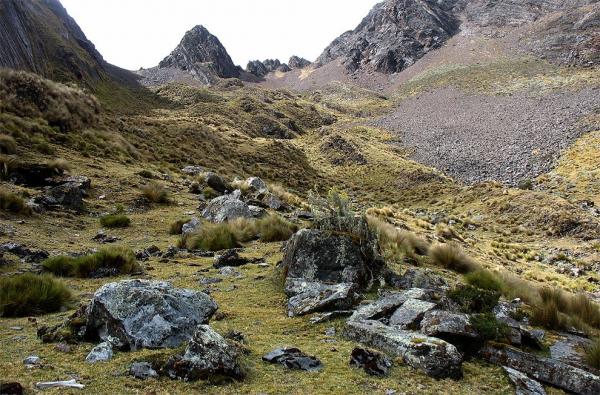 After an hour and a half hike from the horror houses you finally stand in the pass Yanacon. Below you is the valley Yanta Quenua, through which you ascended here. 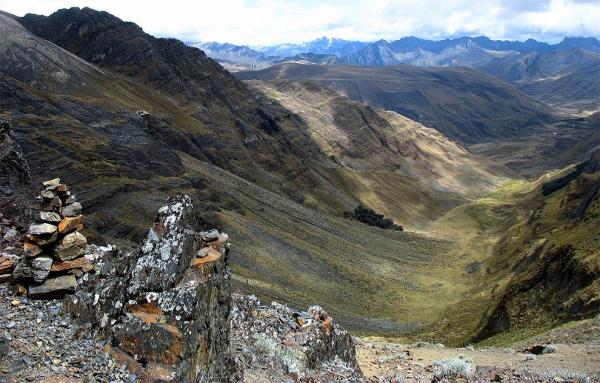 But compared with other outlooks in Cordillera Blanca, the view from the pass is not as groundbreaking, but you at least see of the lagoon Sactaycocha on the horizon. 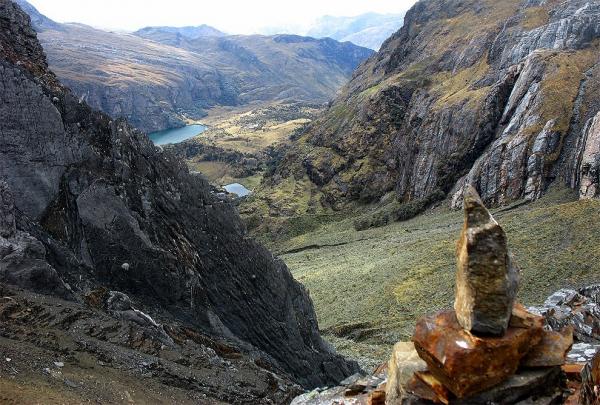 Meadows below the pass

The descent from the pass is in the beginning very uncomfortable, it's steep slippery clay slope and it is in bad weather really risky passage. Just a little farther are the first horror gnarled trees – Polylepis tarapacana. These are trees that grow in the highest altitudes in the world. Unfortunately, only a very small percentage of these forests preserved until today. About 400 meters below the valley extends into large meadows. Here it is relatively difficult to track the trekking route. All this part of the mountains is a little greener.

Walk through the barren countryside

Rivulets flowing through pampa turn northward and flow down into the lagoon Sactaycocha. However, you hold to the southern end of the meadow and ascend to the rock step. From there then descend through the barren countryside, where glacier led years and years ago. On the horizon in front of you already stretches mountain ridge bordering the valley of Janca Pampa, your temporary destination. 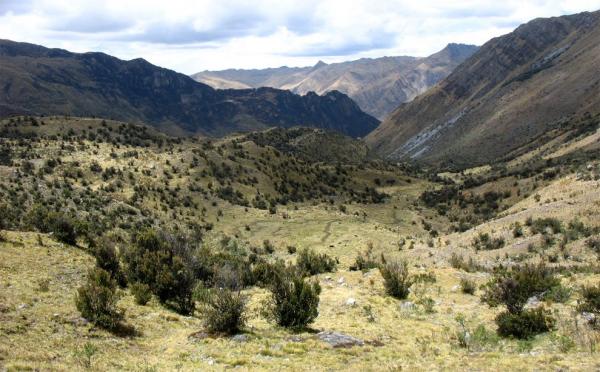 After going through the barren landscape awaits you steeper descent along the old moraine and then along the well-distinct path along the creek still down. There is increasing shrubbery and after a few days you can meet a few locals coming here for firewood. During the descent, do not be lured by the „shortcuts“ from the main path that can be changed into steep muddy trails. A beautiful panorama of wide valley of Janca Pampa with small farmhouses and herds of horses and cows finally opens before you after an hour and a half. It is very beautiful and picturesque place. There is also a junction of paths. From here you can set out to Pomabamba and end the trek or continue on and bypass the entire massif of Alpamayo. 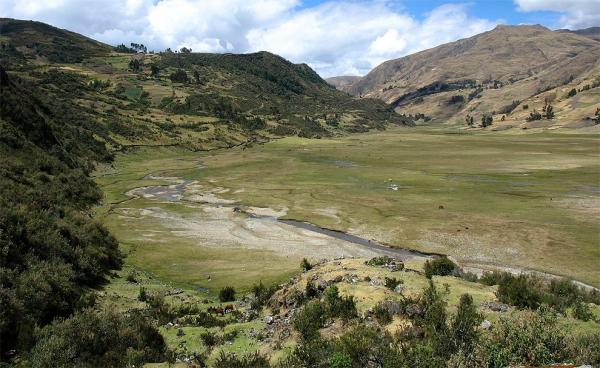 Hike Through Janca Pampa to Pomabamba