Under the most beautiful mountain in Per

Alpamayo BC trek 4: The longest, toughest and also the nicest „side“ trip at Alpamayo Base Camp trek is the ascent to this base camp and then further through the valley to the south to the small lagoon directly under the side of Nevado Santa Cruz Chico with an amazing view. This is also the highest point of the trek and the only place where the tourist gets over five thousand meters above sea level.

Distinct path from the camp Jancarurish (4210 m asl) leads to a partially ruptured moraine of the lagoon Jancarurish and then sticks to creek flowing along this moraine along from the west. If you look back, you can nicely see the tops of the ridge Milluacocha. 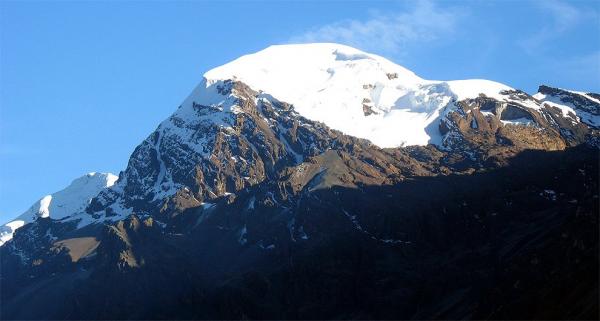 After about an hour of the sharper ascent you finally reach the moraine edge of the lagoon Jancarurish (4300 m asl) working as a nice outlook. From here looks Alpamayo really nice, but you would expect from this mountain a something little more monumental. From the north side it looks like a small peak towering above the ridge. From the former icefall above the lagoon remained just a completely smoothed rock. 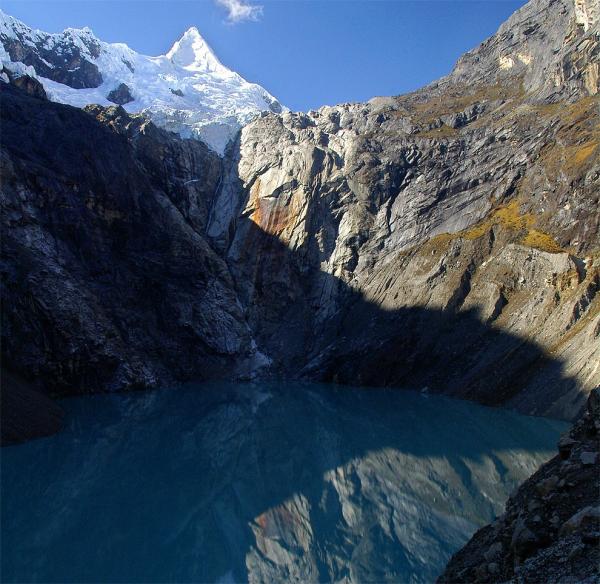 When you look back, it is possible to see clearly the main path along the moraine, a short detour to the outlook of the lagoon and other alternative paths along the edge and down to the lagoon. The paths were probably trodden by photographers seeking for the perfect composition. Entirely on the horizon you can see the pass Gara Gara renowned by the fact that weather spoils quite often over it and strong winds blows. Tourists usually cross this pass the fifth day of the trek. 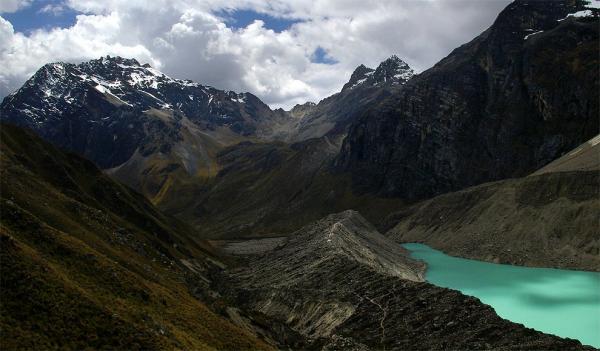 From the lagoon you ascend steeply more than 200 vertical meters to upland pampa. The effort is rewarded with constant beautiful views of the Alpamayo. Here is certainly not valid the classic photographic rule to get up early, because this western part of the mountain becomes in more and more adequate light as the day passes. 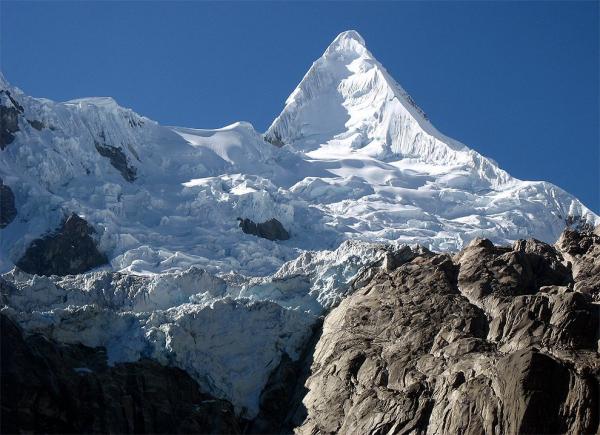 After another hour of the trek you finally ascend to the barren upland pampa (4550 m asl). With it end the views at Alpamayo. So paradoxically it is not possible to see the mountain from basecamp. A great advantage is that the path rises along the clean stream, so there is no problem with water. 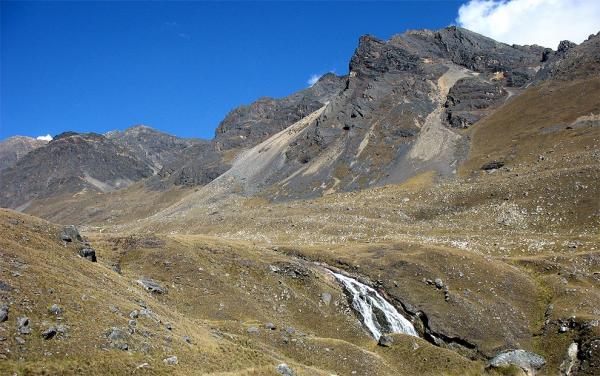 Along the pampa you go a little while very comfortably without a significant ascent. Horizon is dominated by the mighty Santa Cruz and smaller mountain Abasraju. 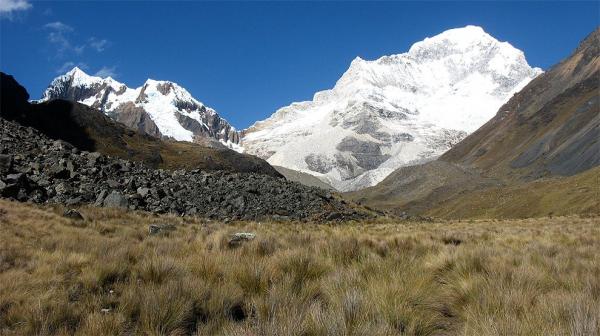 It is not so dominant as Santa Cruz, but Abasraju still belongs to nice mountains. 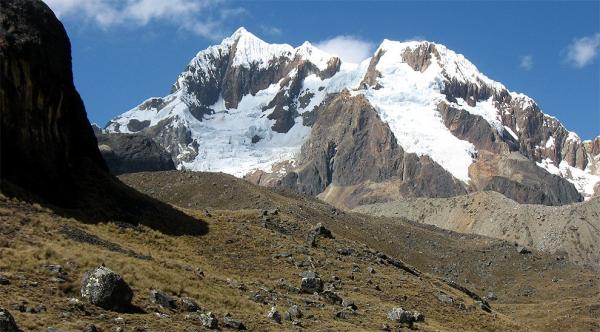 After an hour and a half walk along the pampa you reach a place (4700 m asl), where moraines of the two six thousand mountains converge – Nevado Santa Cruz and Quitaraju. From here begins the hardest part of this trip – very steep ascent to the top of the moraine. 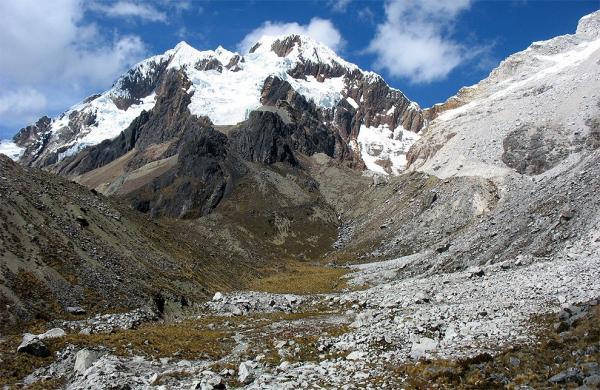 During the ascent along the unpleasant moraine there are pretty views of Santa Cruz Chico. From this side it looks more monumental than from the south from the lagoon Yuraccocha. 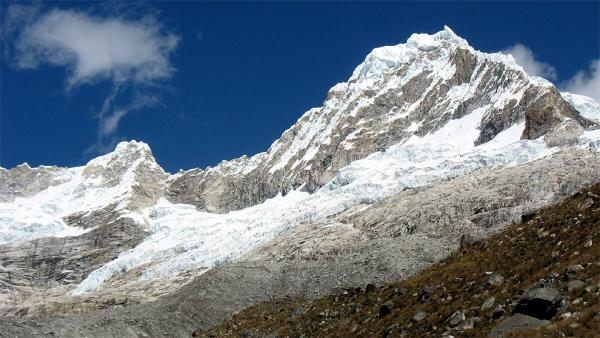 The outlook of the lagoon

The reward for the unpleasant ascent to the moraine is a beautiful view of the unnamed lagoon (4865 m asl). It is an ideal place for a snack and a little rest before the final ascent. 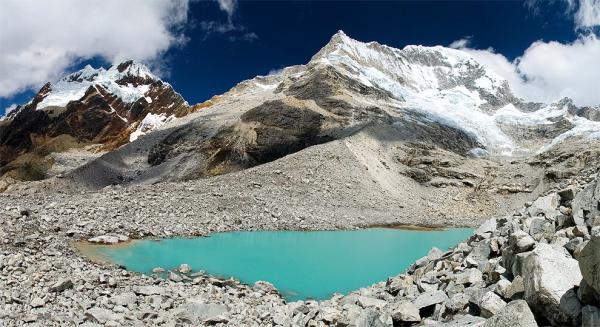 End of the ascent

After another hour of the way along the rocky moraine you finally come to the last shallow lagoon (5025 m asl). From here the side smoothed by glacier rises steeply up to the top of the mountain. It is the highest point of this trek, where you can scramble. 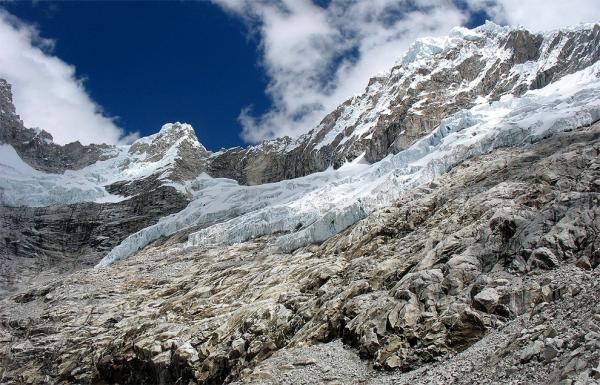 The outlooks of the surrounding mountains from five thousand height are absolutely awesome. 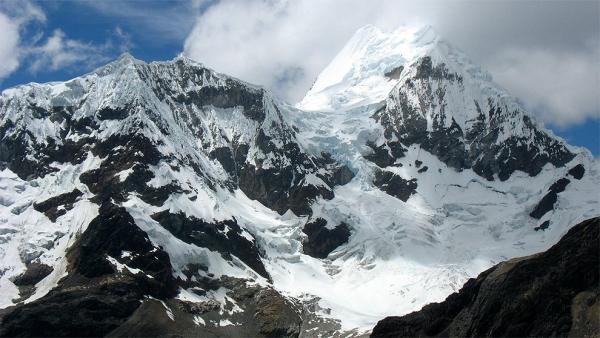 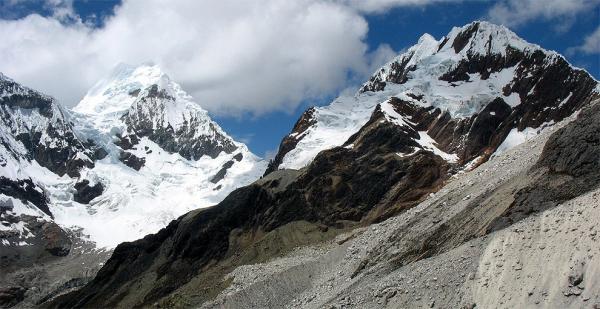 Look down of the lagoon

Blue eye of the lagoon near the weathered debris fields. The way back to the camp is faster. It takes three hours at maximum. It is necessary to take into account that it's a very remote area here, where you do not meet a person for several days even in the main season. 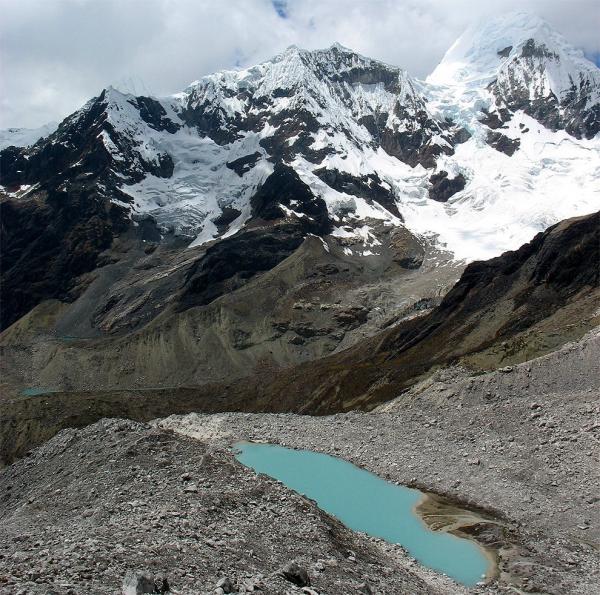