Ascent to the highest mountain in mainland Spain

Dominika Charvátová
Wrote 119 articles and follows him / her 11 travelers
(1 rating)
Hiking Mountains Climbing
© gigaplaces.com
They been there:
They want there:

The ascent to Mulhacén from the south is not very difficult, especially when you approach the summit by bus, which is operated by the national park administration and which will take you up to 2,700 m above sea level. Malaga, where temperatures are above 30C. You can cool off during the day and still enjoy the views of the entire mountain range.

Capileira, beginning of the tour

The ascent starts from the village of Capileira, which can be reached by serpentines by car or by public transport from Granada. We flew late at night to Malaga, where we rented a car at the airport and set off for the Sierra Nevada. We slept on the bank of the Embalse de Rules (36 ° 51´57.07´´N, 03 ° 29´06.12´´W). Due to a little wandering, searching for an open pump to buy water (after 12 hours it is a problem) and also due to an early morning getting up, we only slept for about 4 hours, but it was still enough. In the morning we continued on serpentines only about 45 minutes to the village of Capileira, which is nestled in the mountains and stands on terraced floors.

Road under the peak to Alto de Chorrillo

A minibus organized by the NP administration leaves the village of Capileira several times a day. The website (http://www.reservatuvisita.es/…ra-alto-del/) they can book places. However, after finding out that the payment is possible only by bank transfer (with greasy fees when transferring to a foreign account), we agreed by e-mail that we would pay in cash on the spot. There, they also told us that the site did not work as well (does not show occupancy), so most people can arrange a place on the bus over the phone.

The minibus goes up for about 1 hour and the administrator of the Paco National Park introduces us to the attractions of the area along the way. He also speaks a little English, so we also have something non-Spanish speaking from the interpretation. Along the way, we take a break for a photo shoot at the Mirador de Treveléz viewpoint.

Way to the top

After the minibus takes us to its upper station (Alto de Chorrillo), we continue on the site by ascending a footpath. The path is obvious and there is no doubt where we should go next. Just below the top, we pass the Mulhacén II peak, which also has a peak marked with a Beron column and could confuse someone that it is already at the top. From where, however, the road leads only a short distance to a milder hill. 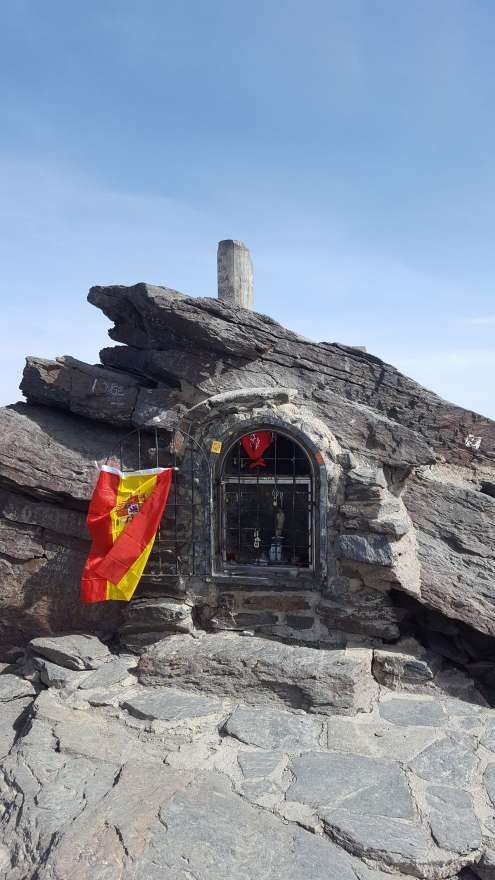 At the top there is a small chapel and a concrete pillar marking the top together with a plate on the ground. There is a distant view of the entire Sierra Nevada, which is ideal for hiking or cycling in the summer months, as it is interwoven with many paths and dusty roads. There is also a more pleasant temperature (approx. 10–15 ° C), so you can cool down beautifully for the day and escape the heat, which prevails a few kilometers lower throughout Andalusia all summer long. In winter, the mountains are ideal for skiing, because due to its high altitude it is covered with snow and also equipped with several lifts. 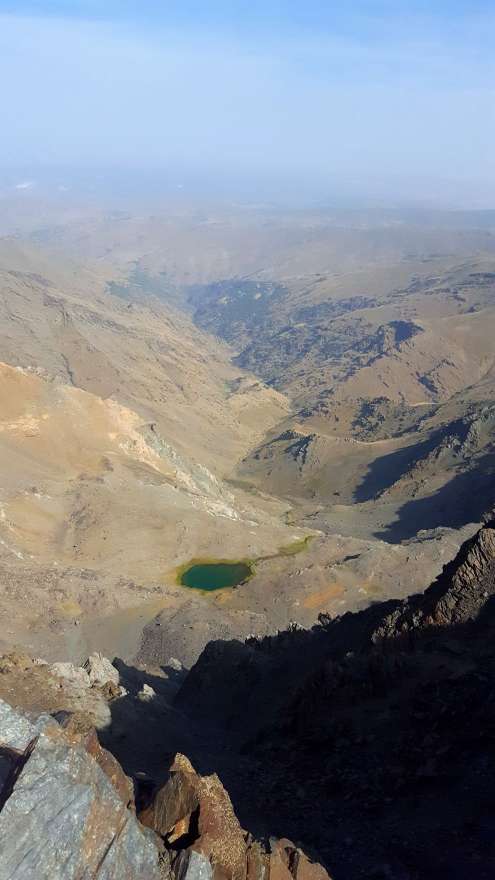 We made the way up and back to Alto de Chorrillo (the upper station of the minibus) in about 2.5 hours. BUT … It went well up despite the high altitude, we managed it in 1.5 hours (probably the ascent and the subsequent descent were so fast that the body did not have time to react). Upstairs we rested for about a quarter of an hour, loved the views and because we had the choice to either run on the previous bus or walk over the top for another 4 hours until the next bus arrival, we chose the first variant (also because the forecast reported incoming clouds and storms to the afternoon). So we ran down (we really ran about 1/2 of the route, we were easy and the terrain also allowed it) in 45 minutes to catch the bus at 12:15. The departure times of the buses are not really well thought out. It would be enough if at least the second bus upstairs waited an hour longer with the departure and it would be much more pleasant and realistic for most tourists to catch it. Nevertheless, I can recommend climbing and walking in the Sierra Nevada mountains, it is definitely worth the picturesque villages in the foothills with narrow and steep streets. The relaxed and relaxed atmosphere of southern Spain is ubiquitous.

Trips and hikes in the Sierra Nevada mountains

A tour of the town of La Calahorra

A trip to the district of cave dwellings

Tour of the La Mota fortress

Andalusia is the most interesting part of Spain for many travelers. It offers beautiful cities, countless huge castles,… continue reading

Article: Trips and hikes in the Sierra Nevada mountains

The Sierra Nevada, the highest mountain range in the Iberian Peninsula, is easily accessible by several roads and has a number of… continue reading