Tony Výborný
Wrote 57 articles and follows him / her 7 travelers
(1 rating)
Volcanic activity Mountains Climbing
© gigaplaces.com
Suitable for:
Adventurers
They been there:
They want there:

The ascent to the volcano ** Acatenango ** should definitely not be missing from the list of a true adventurer. The hike itself is very demanding, but the well-deserved reward in the form of the turbulent neighboring volcano „Fuego“: [https://www.gigaplaces.com/…ulkan-fuego/] is clearly worth it.

The trip started in the town of Antigua, where we chose a night variant from one of the local offices in one of the local offices. Early in the morning, their van arrived for us, and together with three other people we drove to a local guide, where less equipped members of the expedition (two boys from El Salvador who had never seen snow) took out their jackets and gloves. We also all received food packages for a day and a half. From there we drove to the foot of the mountain and set out for adventure. The first day we had „only“ 7 km to the camp with a total elevation gain of 1300m, of which a good 1000m will run during the first half. The terrain is quite demanding, most of the route leads through loose volcanic ash, so good footwear is really suitable. The first quarter of the route leads through the fields and when the sun is roasting, there is nowhere to hide. The second quarter is a bit more pleasant – it leads through the woods and there are also a few places to rest or take a break for lunch.

In the second half of the way, the landscape opens up to fantastic views, dominated by the nearby volcano „Agua“: [https://www.gigaplaces.com/…vulkan-agua/]. This part of the route is no longer so steep and demanding, but the fatigue is noticeable.

Volcano „Fuego“: [https://www.gigaplaces.com/…ulkan-fuego/] will appear at the very end of a difficult and long hike.

After arriving at the camp, we observed the volcano „Fuego“ for a while: [https://www.gigaplaces.com/…ulkan-fuego/], which spewed clouds of volcanic ash at 10–15 minute intervals. After that, however, we were overcome by fatigue, so we took a moment of well-deserved rest and woke up just before sunset.

From the east side above the clouds rises the volcano „Agua“: [https://www.gigaplaces.com/…vulkan-agua/].

After sunset, it becomes clear why „Fuego“: [https://www.gigaplaces.com/…ulkan-fuego/] in translation means „fiery“.

After the dinner prepared for us by the guide on fire, the real spectacle began. On the ridge to the volcano „Fuego“: [https://www.gigaplaces.com/…ulkan-fuego/] it was possible to see a group of adventurers with headlights, who were to observe the volcano a little closer. 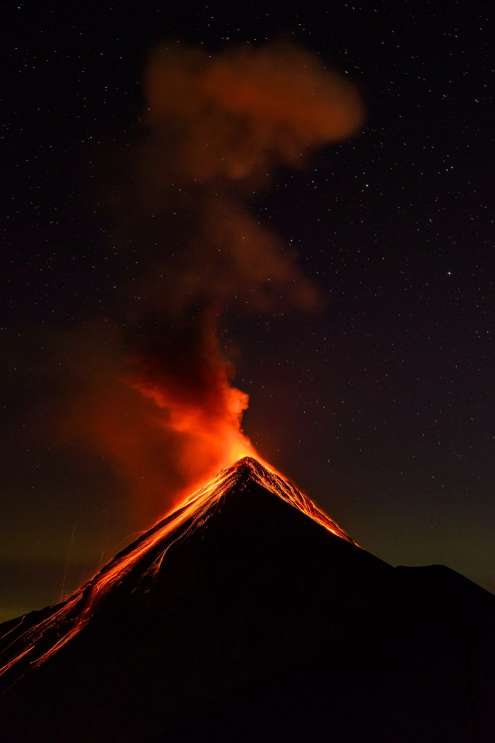 Night photography of „Fuega“ eruptions: [https://www.gigaplaces.com/…ulkan-fuego/] with a starry sky was a fantastic experience that I would not be afraid to call the most amazing natural phenomenon I have ever witnessed. 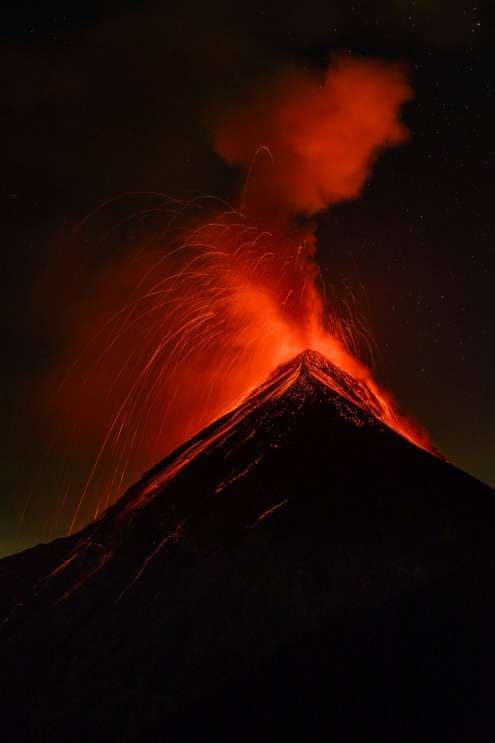 The photography took a little over two hours. Most of the eruptions were smaller, others were stunning. 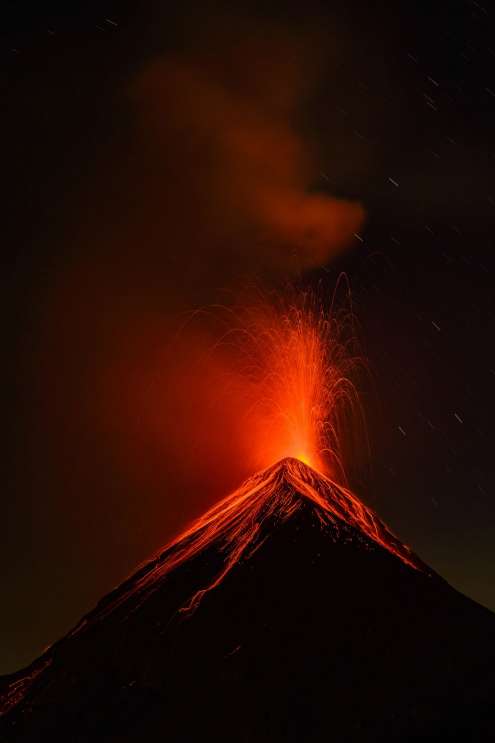 It was not easy to capture the right moment, often requiring very long exposures, which, together with the low temperature, quickly drained the batteries.

High above the clouds

In several places below the clouds, illuminated towns shone through and the starry sky above them.

After a few hours of shooting, the temperatures began to get close to zero and it was time to go to bed. We went to bed relatively early, as it was necessary to gain a lot of strength for the morning ascent to the top of the volcano „Acatenango“: [https://www.gigaplaces.com/…-acatenango/].

Getting up in the morning around 4 o'clock was quite difficult in itself and the ascent to the top was even more difficult. One member of our group stayed in the camp, apparently he did not manage to acclimatize and got altitude sickness – no wonder, he was a Dutchman and this was his first ever hike to a mountain.

The terrain for the ascent was even worse than the first day, volcanic ash and dust were everywhere. Each step up meant slipping half a step back. Around 6 o'clock we reached the crater „Acatenanga“: [https://www.gigaplaces.com/…-acatenango/], from where we observed the eruption of „Fuega“: [https: //www.gigaplaces. com / misto-volcano-fuego /], waiting for sunrise.

Waiting for the sunrise seemed long and uncomfortable due to sub-zero temperatures, but it was definitely worth it.

Then we marched around the giant crater of the volcano „Acatenango“: [https://www.gigaplaces.com/…-acatenango/], where a strong and freezing wind was blowing.

Even from here, the views of the raging „Fuego“: [https://www.gigaplaces.com/…ulkan-fuego/] were fascinating.

There are many other mountains and smaller volcanoes on the west side.

Inside the crater, someone even set up.

After going around the crater, we went down – back to the campsite.

We picked up a Dutchman at the camp, collected things we didn't take with us to the top, and continued down. Along the way, we met other groups who had no idea how challenging but beautiful hike they had in front of them.

The ascent to volcano San Pedro

Trip to Lake Atitlán - West side

Giga List: The most beautiful trips and tours in Guatemala

Guatemala is considered the most Indian country in Central America with immense natural beauty. Tourists are attracted here… continue reading