One of the most beautiful hikes around Ještědsko-Kozákovský ridge leads from Hodkovice nad Mohelkou to Ještěd. The way is almost all the time along the treeless ridge, so the views of both sides are absolutely excellent – to densely built Liberec valley, around the highest Czech mountains and picturesque hills in the south.

Start of the trip through the eastern part of Ještěd´s ridge begins in Hodkovice nad Mohelkou (360 m asl). There is a possibility to choose from two hiking trails. Most people choose the red trail leading over the top of Javornik (684 m asl), but its top is overgrown by forest, so it is far better to begin with the green trail and see nice Raubířské rocks just behind the town. The entire hike leads through the natural park Ještěd. 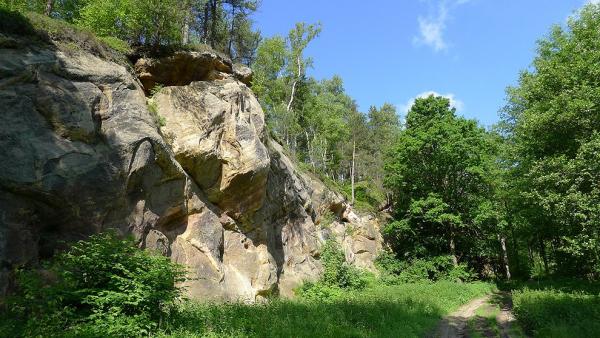 The path from Raubířské rocks is rising through the woods surrounding the small hill of Kozi brada (= Goat´s jawline) (524 m asl) and it gets to a nice scenic meadows with views of the ridge in about 500 meters above sea level.

View to the southeast

During the ascent to Javornik´s chapel (where the two tourist routes from Hodkovice link) is also a nice view over the valley of the river Mohelka to continuation of the ridge, now already Kozákovský ridge.

If you went along the green trail, at Javorník´s chapel (645 m asl) you are finally at the ridge after 4.5 km walk /the ridge is 300 meters higher than Hodkovice/. A beautiful view of the continuation of the whole ridge up to the highest peak Ještěd opens after passing through a small grove. At the very left you can see a tiny settlement Rašovka with a small lookout tower. 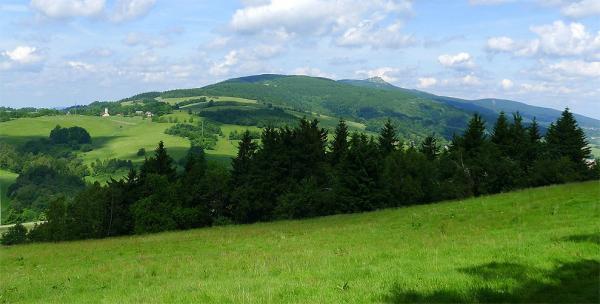 View back to Javorník

The path slightly decreases through the picturesque countryside from the chapel to Rašovského saddle (570 m asl) /see the introductory slide of the photoreport/ with  views of Bezděz, Ralsko and tens of further hills on the south. From here the path rises again in the direction of settlement Rašovka (615 m asl) /7 km of the walk/, where you can buy some well-deserved refreshments :-). A small road also leads through the settlement and overcomes thus the ridge, so there are a lot of cyclists during nice days. There are also good views back including those of the hill Javorník with the transmitter from here. 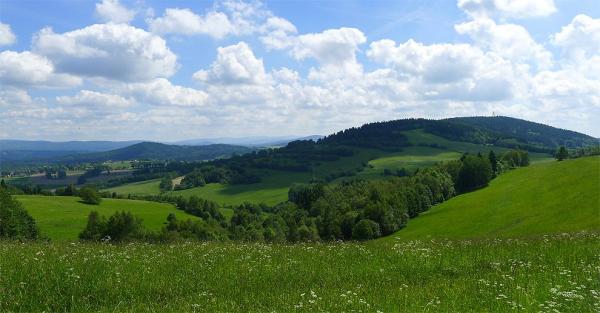 There is also large regional town Liberec filling almost the whole basin bearing the same name at the foot of the Jizera mountains. 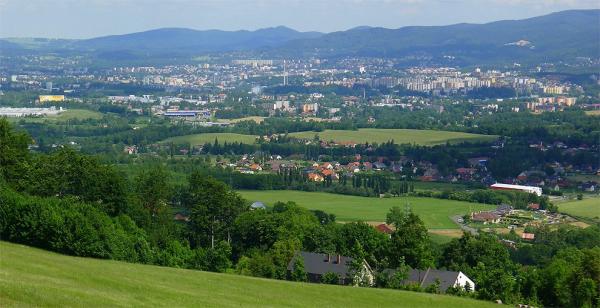 After two km walk from Rašovka you come to a crossroads u Šámalů (= At Šámal´s) (730 m asl). The views end here unfortunately for some time as the path continues three kilometers through the forest across Hlubocký ridge /up to 827 m asl/ to Pláně pod Ještědem (790 m asl). There is the second refreshment possibility on the trip.

The path from Pláně pod Ještědem leads just below the summit of Černý vrch (= the Black Hill) (950 m asl). There are not many views, but there are quite interesting small rocks. 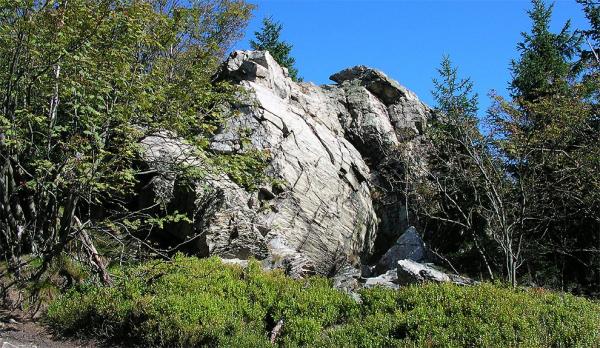 Just in front of the crossroads and car park – Ještědka (930 m asl) /14 km of walk/ you can already see the biggest summit of Ještěd ridge. 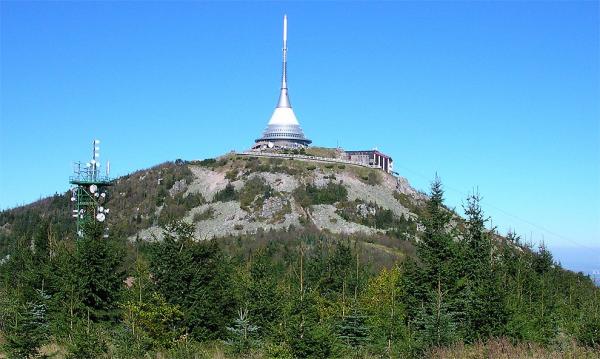 Walk around the castle Valdštejn

Hike through the rocks of Hruboskalsko