Hike along the Rieger Trail

Through the beautiful Jizera canyon

Petr Liška
Wrote 2214 articles and follows him / her 204 travelers
(3 rating)
Hiking Nature
© gigaplaces.com
Suitable for:
Hikers
They been there:
+10
They want there:
+27

The Rieger Trail is one of the most beautiful „river“ tours you can undertake in the Czech Republic. The most attractive part of this march is between the village of Bítouchov located on the northern edge of Semily and the Spálov railway station. In the narrowest part of the canyon is an attractive suspension bridge, which is a symbol of this hike.

The starting point for the Rieger Trail for most tourists is the district town of Semily. There are relatively enough parking spaces (there are supermarkets next to the center). If you want to save a few hundred meters, you can park in a housing estate at the northern end of the city. If you start the march in the center, you can go either along the red hiking trail, which leads, however, along the road or the nice park Ostrov, which is a more pleasant option. The road connection is at the footbridge over the Jizera, where there is also a small pier for those who want to swim in the river.

Jizera at the bathing jetty

Thanks to the rafting, which is only a few tens of meters away, the Jizera bathing pier is relatively calm and deep.

From the park Ostrov it is about 1.2 km walk to another footbridge, already on the outskirts of the village Bítouchov. The road here leads along the edge of the Semily settlement still along the river. For the locals, it is a relaxing and sports part of the city – you will meet not only tourists, but also cyclists and mothers with prams.

After a while, you are already in Bítouchov, from where the yellow tourist path (Kamenického stezka) leads, along which you may return if you want to make a wheel. If you want to save 2 + 2km you can leave your car instead of Semil here. Behind Bítouchov, a march around the meadow awaits you, and then finally the entrance to the canyon.

Probably the most beautiful place of the whole tour is almost at the beginning – the beautiful Jizera canyon. The river is compressed here between several tens of meters high walls and the path must lead along a windy footbridge. Picture from both the Alpine countries and the picturesque but not very dramatic Czech Republic.

On the other side of the river you will see another local attraction – the Water Gate ferrata – difficulty C. It is accessible from Semily along the blue hiking trail, which ends at this rock. 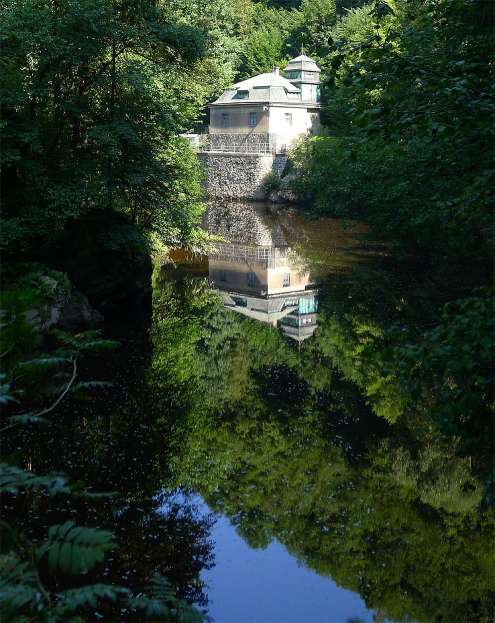 View of the hydroelectric power plant

From the end of the suspension bridge there is also a nice view of the historic building of the hydroelectric power plant.

The slopes of the canyon

The road leads most of the route along the contour line just a few meters above the water. The walls of the canyon rise sharply above you and are dotted with dramatic rocks.

Rieger's trail leads practically all the way in the shade, so even in the hot summer the march is pleasant. In addition, some passages are secured by railings, so even parents do not have to worry too much about their children here.

Even on this tour, one ascent awaits you. You climb the slope to a rock high above the river at Böhm's viewpoint. All the way you are surrounded by a picturesque beech forest.

Böhm's prospect is an ideal place for a snack. However, you will hardly see the lake through the dense forest. In late autumn, after the leaves have fallen, it may be more interesting here.

The descent from the viewpoint back closer to the water leads through still attractive rocky terrain.

Some places to relax really underline the character of this trail.

Passage through the tunnel

Especially for children is the passage of a twelve-meter-long tunnel built in a rock falling sharply into the Jizera.

Some of the places above the trail are really impressive.

You don't even have to take large supplies of water for this hike, because here you will come across two springs of clean water. Not far behind the tunnel is Hvezdiččina studánka and a little further on the beautiful spring of Antala Stašek

After about an hour and a half of walking, you will climb out of the forest and a second hydroelectric power plant will appear in front of you. You are already in Pospálov. From here the road descends to the confluence of the Jizera and Kamenice. There is a railway station in Podspálov on the Železný Brod – Tanvald route. Rather than returning the same way, it is better to continue from there along the blue tourist road to Spálov and return to the seeds, for example along the Kamenický road.

Hike along the Dry Rocks

Giga List: The most beautiful tours of the Bohemian Paradise

Bohemian Paradise is a promised area for tourists. Here you will find beautiful trails through the famous rock towns,… continue reading

Giga List: The most beautiful tours of the Czech Republic

The Czech Republic is a promised country for tourists. You will find beautiful trails through the famous rock towns, breathtaking… continue reading