Dominika Charvátová
Wrote 119 articles and follows him / her 11 travelers
Cities
Author: Dominika Charvátová © gigaplaces.com
Suitable for:
Seniors
Hikers
Excursionist
Holidaymakers
They been there:
They want there:

Zadar is a very lively city in the north of Dalmatia, which is located partly on the mainland and partly on a small peninsula. The city lies on the Adriatic Highway, 20 km from the highway but is also easily accessible by air from Zemunik Airport. Zadar is a suitable destination both for swimming and for admiring the historical monuments, which the city has a lot, mostly Romanesque and Renaissance buildings.

The mainland gate (Kopnena vrata, Porta Terraferma) is part of the former fortifications and the main entrance gate to the historic part of the city. Back in the 19th century, it was the only entrance gate to the city. It is built in the Renaissance style from 1543 according to the architect Michele Sanmicheli. It has two small side pedestrian entrances and one large one in the middle. Above it is depicted Saint Chrysogon (saint Krsevan) on horseback, which the city has in its emblem. Above us is a winged lion of St. Mark, the symbol of the Venetian Republic. The gate was equipped with a drawbridge, which was canceled in 1875.

Right at the gate is the Foša wharf, where it is often social. Croatia is rich in seafood, which then smells of nearby restaurants.

The former name was the church of St. The Trinity, dates from the 9th century and is the most valuable pre-Romanesque monument in Croatia and also a symbol of the city. It is 27 meters high and 22 meters wide. According to legend, it was built by the Bishop of Zadar, Donát, and in the 15th century it was also dedicated to him. Thanks to good acoustics, the International Festival of Medieval and Renaissance Music has been held here regularly since 1960.

Cathedral of St. Anastasia of Sirmia

Right opposite the church of St. Donat you will find another landmark of the city of Zadar, the Cathedral of St. Anastasia of Sirmia. It is the main temple of the Archbishopric of Zadar and the largest church in Dalmatia. It was built in the Romanesque style in the 12th and 13th centuries on the site of an older Christian basilica from 4 to 5. century. In 1177, the cathedral was visited by Pope Alexander III. and on June 9, 2003, on one of his last foreign visits, Pope John Paul II.

Between the church and the cathedral is a large square where you will find the remains of the Roman Forum. It is the largest Roman forum on the eastern side of the Adriatic Sea and was founded in the 1st century. It served as the main square of Roman Iader, where the everyday life of the city took place. The initiator of the forum was founded by the first Roman emperor Augustus, as evidenced by two inscriptions on stone from the time of completion in the 3rd century.

Promenade by the sea

From the forum, it's a stone's throw to the promenade along the sea, which is nicely landscaped and the locals are happy to use it to walk and enjoy the view of the sea.

Zadar boasts two modern, technically unique attractions: on the coast in the westernmost part of the city you will find the Sea Organ. The sea organ makes specific sounds as the waves push the air through the vents in the pavement.

Greetings to the sun

The second unique feature on the coast of Zadar is the installation Greeting to the Sun (Pozdrav Suncu). It consists of three hundred multilayer glass slabs placed on the same level as the stone paved embankment. These are arranged in the shape of a circle with a diameter of 22 meters, under which are photovoltaic solar modules. The light elements installed in the circle light up at night to create a light show. 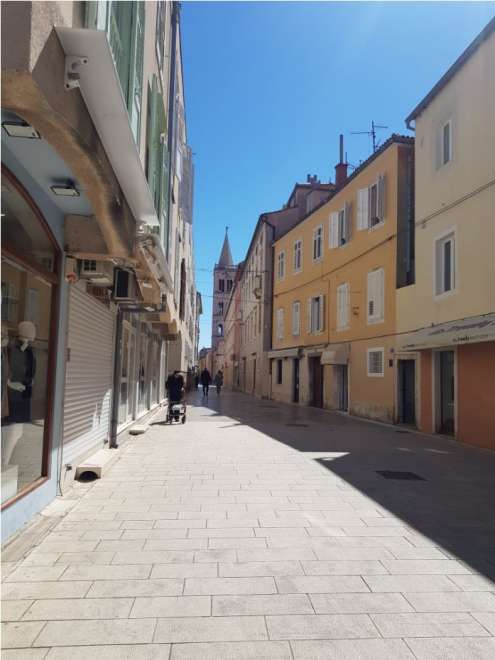 Alleys of the old town

The old town of Zadar, like most medieval towns, is a tangle of variously narrow and winding streets, where you will find countless shops with everything. 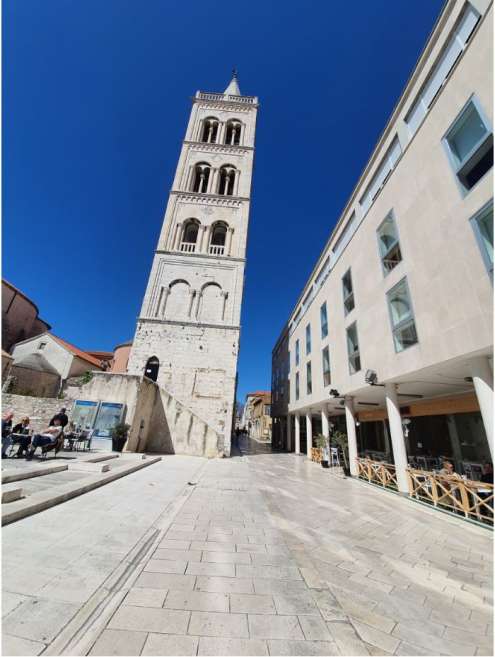 History in Zadar intertwines with the modern city and Croatians can enjoy the comfort of coffee in the garden of the restaurant, for example in the shadow of the tower from the Cathedral of St. Anastasia.

The square of five wells (Trg pet bunara) from 1574 was built above a large reservoir for collecting water. The water flowed through five octagonal wells, after which the square was named. There are also several historic buildings such as the Municipal Guard (Gradska straža) from the 16th century, the Municipal Loggia (Gradska Loža) and the town hall from 1936. In the area of the town hall, the old Croatian church of St. Lawrence (Sveti Lovre) from the 11th century. 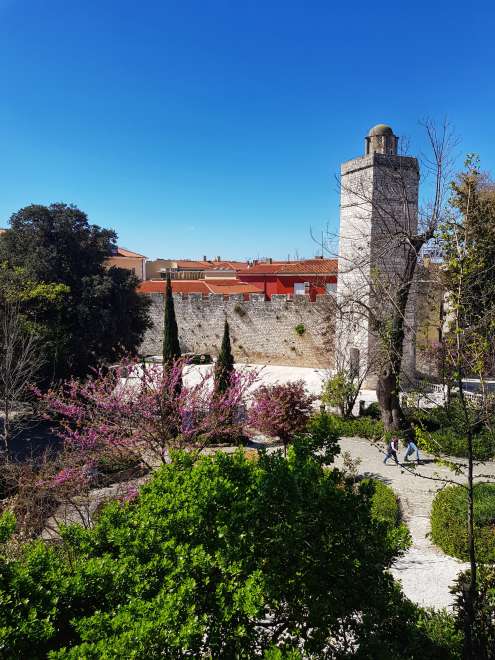 Right next to the square you will find a small oasis of greenery on a hill on the city walls. In the park of Queen Jelena Madijevka you can go hide from the noise of the city, cool off in nature and enjoy the view of the surroundings.

A tour of the town of Nin