At the foot of the Bohemian Central Mountains

Dominika Charvátová
Wrote 119 articles and follows him / her 11 travelers
(1 rating)
Castles and ruins One Day Trips
© gigaplaces.com
Suitable for:
Car tourists
Families with children
Families with a stroller
Excursionist
They been there:
+8

The ruins of Hazemburk Castle, which is very recognizable from a distance, are located at the foot of the Bohemian Central Mountains. The dominant position of the castle is provided by its location at the top of the Hazmburk basalt massif, which reaches a height of 418 m. This impregnable Gothic castle consists of the Black and White Towers. You will get up by a short walk upwards and count on the entrance fee for entry.

Arrival to the castle

The view from the south will prepare you for a view of the towering volcanoes of the Bohemian Central Mountains. From here, there is also a basalt hill with two towers, so characteristic of the castle ruins. The best start to the ascent is from the village of Klapý, where there is also a large paid parking lot.

Ascent to a steeper path along the yellow

From the parking lot you can choose from two exit routes. The steeper route leads along the yellow tourist path and the milder route that leads around is along the red one and is also suitable for prams.

At the gates of the castle

After ascending about 150 meters of elevation gain from the parking lot through the forest in the castle grounds, the majestic stone towers of the castle suddenly appear in front of you. At the gate you pay 100 CZK for adults and children up to 6 years free and you can boldly continue to the complex. 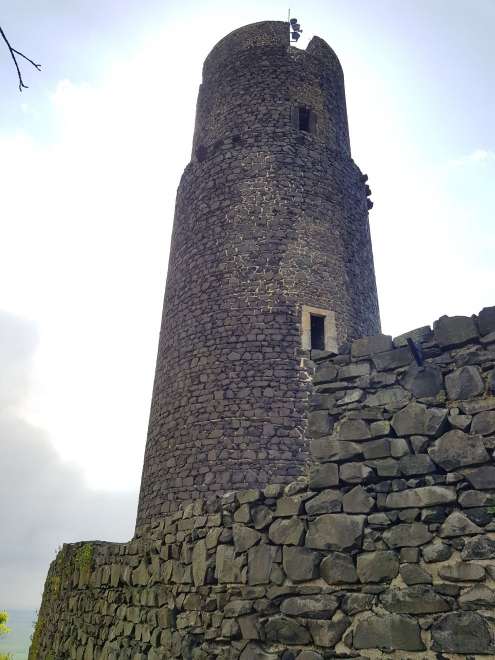 The path to the castle ends at the remains of the first gate and behind it you will find the oval 25 m high Black Tower in the place of the lower castle. It was built of local dark basalt. The tower was an important defensive element and access to it was possible only through the suspended porch on the floor. At one time it also served as a prison. Unfortunately, it is not possible to enter it today.

View from the Black Tower

In front of the Black Tower you will find a few picnic tables, from which there is a beautiful view into the distance. 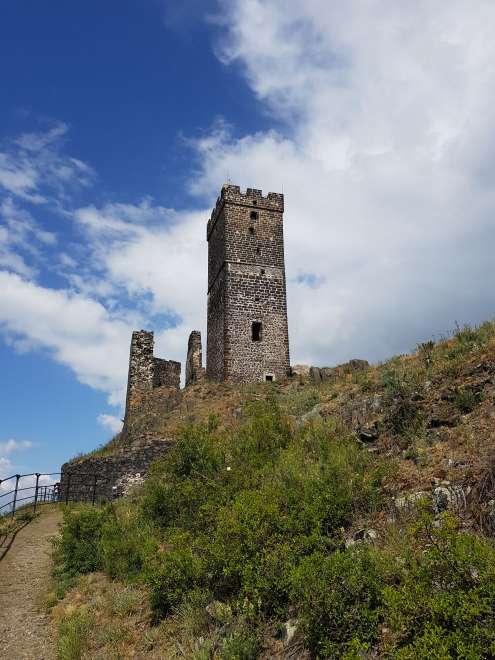 If we continue with the tour, the path will take us to our own castle core with a prismatic White Tower. It got its name from the light sandstone used to build its upper part. However, the foundations of the tower are made of basalt, the middle part of carved sandstone and only the top of well-worked sandstone blocks. This points to at least three stages of construction, with the youngest, upper part, being originally wooden. The tower reaches a height of 26 m and is definitely worth climbing to its top, from where there is a wonderful view.

The top of the tower

Believe, the upper part has been repaired so that it does not leak into it and you can hide in the event of rain.

View of the Black Tower

From the top of the White Tower, you will have its smaller oval sister, the Black Tower, in the palm of your hand.

View of the Czech Central Mountains

From the tower you have a 360 ° view of the wider surroundings. The Czech Central Highlands stretch to the north. We were lucky that a storm was just passing by, providing us with interesting views and an accurate meteorological forecast.

Clapping in the castle grounds

On the west side of the castle grounds there is a view of the village Klapý, where the castle is located. Behind her, in the distance, long straight fields.

The second way down

As a descent route, we chose the second of the possible routes, the milder one along the red route. In the castle you will find a vineyard where you can have a snack or buy something at home. The picturesqueness of the landscape is completed by grazing sheep and goats in the orchard with a view of the romantic ruins of the castle.

Giga List: The most beautiful trips in the Bohemian Central Mountains

The Czech Central Highlands is one of the most interesting areas in the Czech Republic. Dozens of beautiful cones rise above the… continue reading

Giga List: The most beautiful trips in Northern Bohemia

Northern Bohemia offers countless beautiful trips and tours, which is not surprising, because here you will find some of the most… continue reading