From Victoria station to Camden

Dominika Charvátová
Wrote 119 articles and follows him / her 11 travelers
(1 rating)
Cities Walks
© gigaplaces.com
Suitable for:
Families with a stroller
Seniors
Hikers
They been there:

A full day walk through London, which leads to parts of the city where parks predominate and a quiet walking path along the river canals. We liked the route because you will enjoy the beautifully landscaped British parks, where you can feed squirrels and parrots by hand and then move to Venice, Italy with gondolas floating on river canals. All this without leaving the city center.

From Victoria station to Buckingham Palace

Victoria station is one of the great bus and train stations. You will also find many transfers to the metro. It is therefore a well-accessible point for starting a walk. After a 10-minute walk around the souvenir shops, you will reach Buckingham Palace, home of the Queen of England. For me, it is ideal to avoid this place whenever the guard changes (once a day in the morning).

Buckingham Palace is the official London residence of the British monarch, currently Queen Elizabeth II. However, the palace is… continue reading

The Mall is on the façade of Buckingham Palace. Flags also hang here during May and summer, as it is often used for various ceremonies, promenades and festivities during this period.

In front of Buckingham Palace you will find a small park. James, where there is a central lake with a large number of different birds, including pelicans from the Prague Zoo. But you will also find here probably the most tame squirrels, which can be fed by hand (please only nuts or fruits and vegetables, if the pampered ones take it at their mercy, but certainly not biscuits and similar nonsense). You can walk around the park along the lake and at the end of it peek into the courtyard of the horse guard.

Horse Guards Parade is a large show space in Whitehall in central London at st. James Park. It was originally a hotbed of… continue reading

After passing St. James Park, return to the palace and turn right into Green Park. This refuge from the hot summer days is an oasis for the eyes and soul. It is usually quieter, and because the park is relatively large, you can always find a corner where you spread a blanket on the English lawn and relax. Then walk through the park to its western end, where you will find the great triumphal arch of Wellington arch

Behind the arch you will find the entrance gate to the largest park in central London. Here, too, the central point is the lake, where you can take a boat ride or swim in a small part of it, but with the number of birds that occur here, I do not know what the experience will be. In any case, Hyde Park also houses a beautiful rose garden, countless footpaths and paths for cyclists or horse riders. 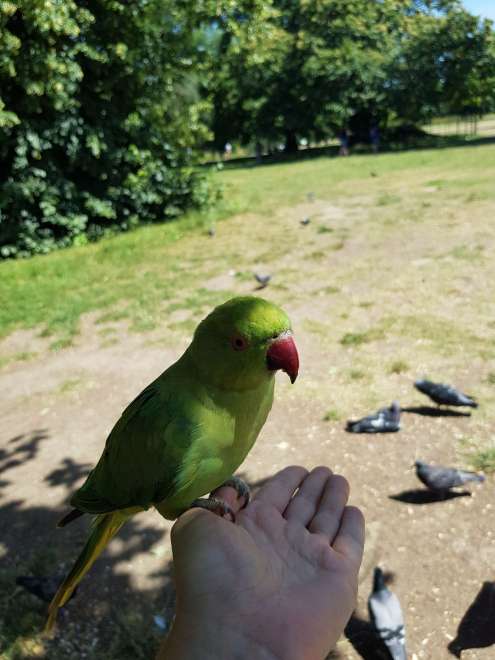 A relatively new „attraction“ in Hyde Park are Alexander the Little Parrots. They are generally very widespread in England, because they were brought here by travelers from Spain and the birds thrive here. However, only in this one place in Hyde Park are they taught to feed themselves. They can handle seeds, nuts or pieces of apples comfortably.

Walk along the river channel

From Hyde Park, exit Lancaster Gate and a 15-minute walk through the upscale Paddington Basin. Here you join the beginning of the trail along the river canal that takes you through Little Venice, below Regant's Park and around London Zoo to Camden.

Footpath along the canal

Along the way, house boats are moored, where locals live or use them as summer cottages. It is a show of folk art and all possible improvements. You can also take a ride on the river, which is strikingly reminiscent of Venetian gondolas and helmsmen with spikes.

The path together with the water canal lead around Regent's Park, where you can peek. It's really big, which also hides the London Zoo. Some animals are visible from the road or from the edge of the park.

The end of our day walk is in Camden. It is a very different part of London with lots of ethno, handicrafts, art originals, street food and much more. The center is a large market where you can buy all this or just get lost in the tangle of its streets and soak up the atmosphere.

Camden town, which is in the north of the city near Regan's Park, has its own special charm. The area is known for its markets,… continue reading