London promenade around the river

Dominika Charvátová
Wrote 119 articles and follows him / her 11 travelers
(1 rating)
Hiking Nature
© gigaplaces.com
Suitable for:
Families with children
Seniors
Travelers
They been there:
+5
They want there:

Most of the historic capitals have at least one larger river flowing, and a walk along its banks will usually take you to the very center of the city. Not even London escapes and its Thames forms the typical character of the city. There is a pedestrian promenade along both banks of the Thames, so you can enjoy the view of historical monuments as well as modern skyscrapers undisturbed, or sit on a bench for a while. My private tip is to come here early in the morning, because you won't meet crowds of tourists here, just a few Londoners jogging.

View of the financial center in the City of London

I started a walk at London Bridge station, from where you walk through the alleys towards London Bridge city pier, which is a stop of the London ferry, but more on that in a separate article. So you walk through the alleys for about 5 minutes and you are at the Thames. Here you will be offered a direct view of the City of London shopping center with its skyscrapers such as Egg, Walkie Talkie and more. 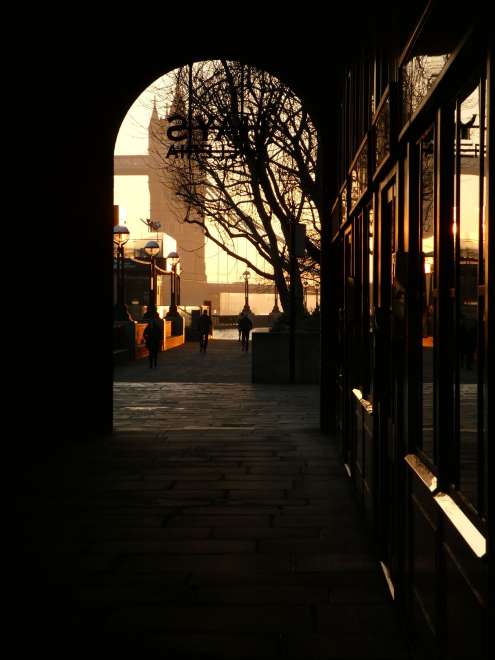 The promenade, especially in the morning light, has a completely different atmosphere than during the day, when you can't see through the crowds of tourists to step in front of you. Therefore, I recommend coming here in the morning, ie if the weather is good and ideally in the winter months, when it dawns in a pleasant 7 o'clock in the morning. It's really worth it.

From the ferry, head right along the promenade against the sunrise and the first thing that strikes you will be the majestic Tower Bridge. This iconic monument, which is not as old as you might think, because the bridge was built only at the end of the 18th century. Nevertheless, it is inextricably linked to London as we know it.

View of the Tower of London across the river

When looking across the Thames, you will undoubtedly be attracted by the four towers of the Tower of London. This Gothic residential building originally served as a royal castle, but most visitors will remember its many years of prison function. At present, whether the massive stone walls are guarded by royal jewels, which tourists and locals come to see. 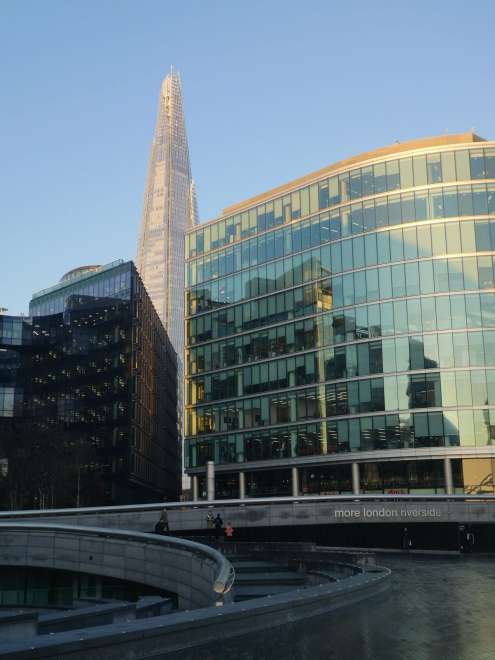 The tallest skyscraper - The Shard

If you look back towards London Bridge Station, where you came out, the tallest skyscraper in London – The Shard – will appear at its full height. It has only been standing here since 2012 and offers those interested a view from the top floor of the whole of London, unfortunately relatively expensive (approx. 1200 CZK). A good alternative if you are looking for a view of central London is The Sky garden in The Walkie Talkie (Fenchurch) across the river. Here you just need to book hazelnuts for free on a specific day and time on the website. Tickets are released 14 days in advance and weekends are quickly gone. 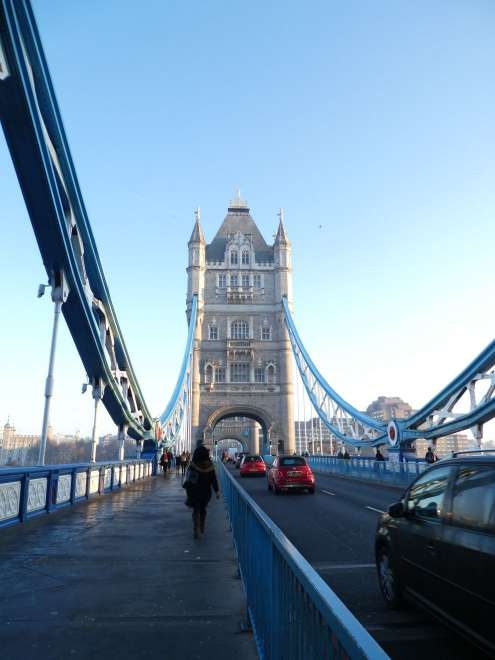 Then turn the road over the Tower Bridge, where walking along the bridge is also an experience in itself. Built at the end of the 18th century, this drawbridge, with its blue color, plays an integral role in the heart of London. For those interested, it is possible to look inside the bridge and walk along the glass floor on the floor of the bridge, where cars drive down the road below you.

View of Tower Bridge from the other side of the river

Further behind the bridge, continue along the river bank back in the direction from where you went on the other bank. You will walk under the Tower of Lonon, where with a little luck you will see Beefeatry – the guardian of the crown jewels. It is not entirely clear where their name comes from, but it will probably have its roots in the fact that these guards were allowed to eat as much beef as they wanted at royal banquets.

Guardians of the Crown Jewels - Beefeater

These men (and one woman) in so many typical black-and-red coats with a hat and cane have been an integral part of the Tower of London since the time of King Henry VII (1485). Their job is to guard the crown jewels. Becoming a beefiter is not just that, such a guard must have completed at least 22 years of military service, for which he received an award for long service and excellent behavior. A kind of mascot of the castle are the ravens who behave in the castle, because the legend says that with the departure of the ravens from the castle, the crown will fall and the whole of Britain with it.

A walk along the other bank leads further and further along the river back to the city center. Sometimes they walk away a little, but if you walk along the Thames path signs, you can't get lost. Another point of interest on the way is the raised pedestrian bridge – the Millennium bridge, which fans of Harry Potter movies will probably know. But we will follow him along the way and move on. 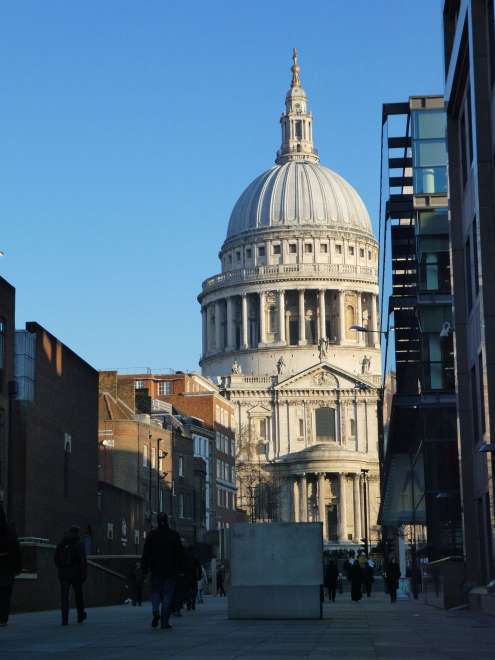 As you walk under the Millennium Bridge, you can take the stairs to St. Paul's Cathedral, which rises directly opposite. This majestic Anglican Cathedral is the seat of the Bishop of London and has stood here since the 17th century. However, the predecessors of this building have stood here since the 6th century, when the diocese of London was established here. Visitors can take a tour inside and see the interior, or ascend to the gallery of the dome, from where there is also an interesting view of the city. 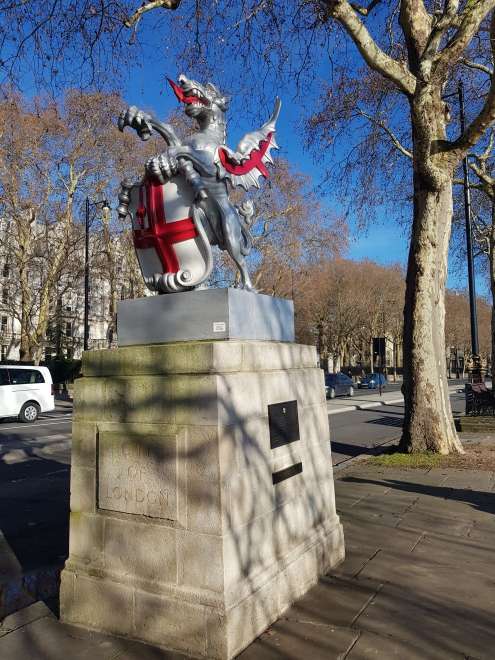 Along the way, you pass ubiquitous signs, signs and other reminders that you are walking through the City of London. This part of London is an independent and smallest district with its own rules and its own mayor. Historically, this part of London was considered the city of London itself, but with increasing years and expansion, this is no longer the case. The City of London is considered the city's financial center because it is home to many large banks. At the same time, however, a part of Canary Wharf is also striving for this primacy today, which you can also see when looking from Tower Bridge in the distance.

The walking path continues along the River Thames and passes one historic building after another, as well as a number of monuments. One unusual monument can be found in the Thames Embankment section. It consists of an Egyptian obelisk imported to the rowboat in a painful way from Alexandria itself at the end of the 18th century. The obelisk is called Cleopatra's Needle and is guarded on both sides by bronze statues of the Sphinx, as the English managed to imitate them according to the original.

Another stop that no visitor to the city can miss is the iconic Big Ben clock tower (currently unfortunately under scaffolding) and the adjoining parliament building (Palace of Westminster) with Westminster Abbey. Here is the seat of the government, where the parliament headed by the prime minister sits and the much-known emotional expressions take place, where the representatives of the Labor party argue with the conservatives. 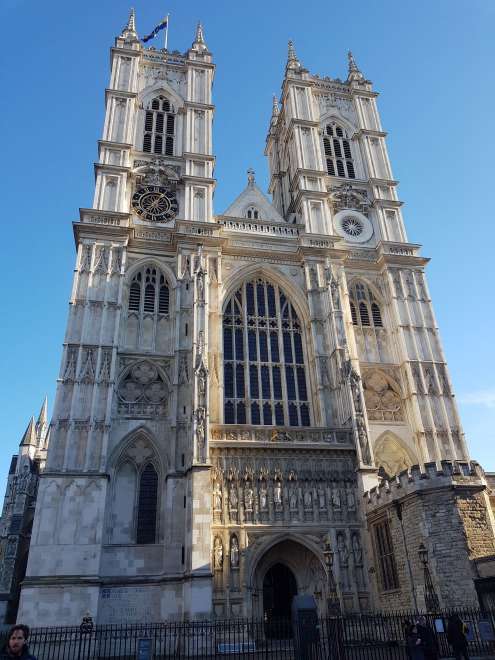 You can easily recognize this majestic temple of the Anglican Church from most of the BBC's live presentations. He is also known for his role in most important ceremonies and royal weddings. Visitors can see the beautiful historic interiors of the temple when visiting it, but the view from the outside is no less interesting 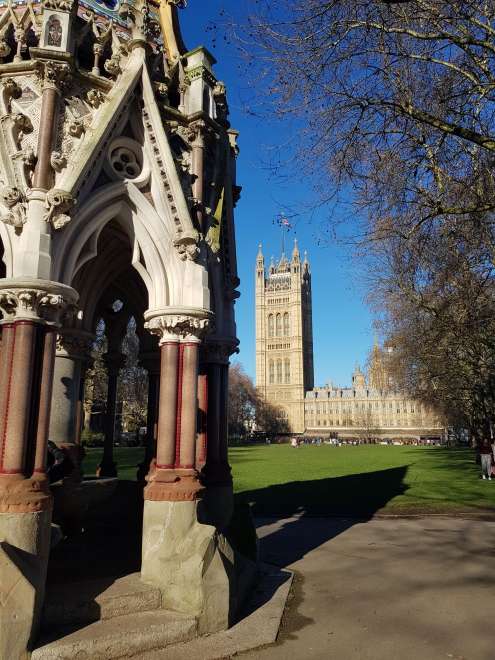 View from Victoria Tower Gardens on the Parliament Buildings

On the same side of the river we are now walking along, you will find a pleasant garden behind the parliament buildings, perfect for relaxation, with a Buxton Memorial Fountain in its center. Even from here, the views of Westminster are unrepeatable.

From the Houses of Parliament, we cross the Westminster Bridge, which offers beautiful views of both Westminster with Big Ben and the popular London Eye attraction. In its relatively short time (since December 1999), this giant sightseeing bike has found a place in the hearts of both tourists and locals. The footpath along the Thames leads many kilometers on both sides of the river. You can walk along the river for the whole weekend or choose only a part of it. One way to see a lot in a short time is to rent bikes that have stations all over London. Thanks to the bike paths leading along the river, it offers an interesting view and experience from the saddle of a bicycle.