Dominika Charvátová
Wrote 119 articles and follows him / her 11 travelers
(1 rating)
Cities Castles and ruins
© gigaplaces.com
Suitable for:
Families with children
Families with a stroller
Seniors
Hikers
Excursionist
They been there:

An interesting day trip outside the gates of London is undoubtedly a visit to the town of Winsdor with the royal residence in its center and together with the prestigious boys' high school in Eton lying across the river. From London, you can easily get here by train with the Southwest railway line in less than an hour to the west. The city is frequently visited by tourists, especially in nice weather.

The main tourist attraction for this trip is undoubtedly the second largest inhabited castle in the world, after Prague Castle. It is also one of the traditional places where British monarchs indulge, most recently Prince Harry and Megan.

The royal residence of Windsor

Unfortunately, we did not go down to the castle, because when we were here before the main summer season, the queue was wrapped around half of the castle and so we used our time to explore the city, park and other attractions.

The infinity of The Long walk promenade, freely accessible to all who like long walks in the green.

One thing the English have to give is their care of parks and greenery in general. You will not find such beautifully arranged parks anywhere else in the world. This tree-lined alley lined the promenade on either side.

Statue of a queen with dogs

On the way from the castle towards the city center, we came across a small, inconspicuous Bachelor's Acre park and a statue of Queen Elizabeth with her favorite dogs, which she keeps. There was a pleasant sitting outside the crowds of tourists.

View over the rooftops of the city

The town itself is also worth a walk. You will find most of the typical features that no English city can miss, such as brick houses, parks, a promenade with shops and churches. Here we were fascinated by the view from the overpass at the train station, where the mighty Windsor Castle rises above the rooftops of the city. 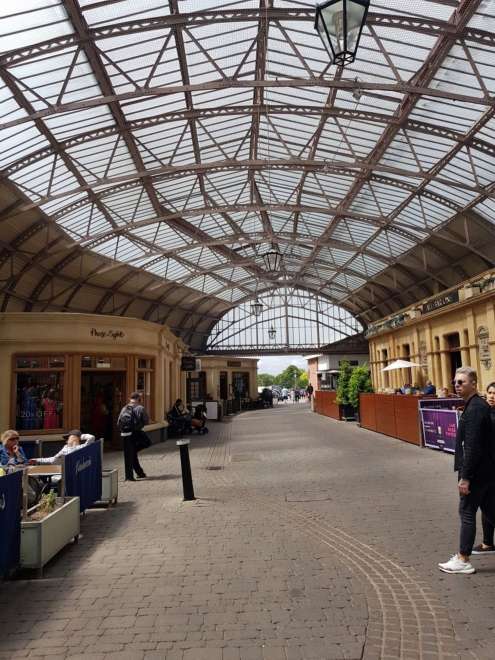 The train station itself is also interesting, which is hidden under a vaulted translucent roof and you will also find a promenade with shops from boutiques to patisseries and restaurants.

In the lobby of the station you will also find a historic locomotive, which was designed for the queen.

On the banks of the River Thames, which flows along the outskirts of the city, we discovered another larger quiet park – Alexandra Park and just across the road the Jubilee Fountain, in the background of which the towers of the castle stand out.

A nice walk is along the banks of the Thames, which separates the cities of Windsor and Eton, where we also went to peek. A large number of shipping companies offer river rides for tourists. Children will certainly appreciate the number of all kinds of birds to feed. 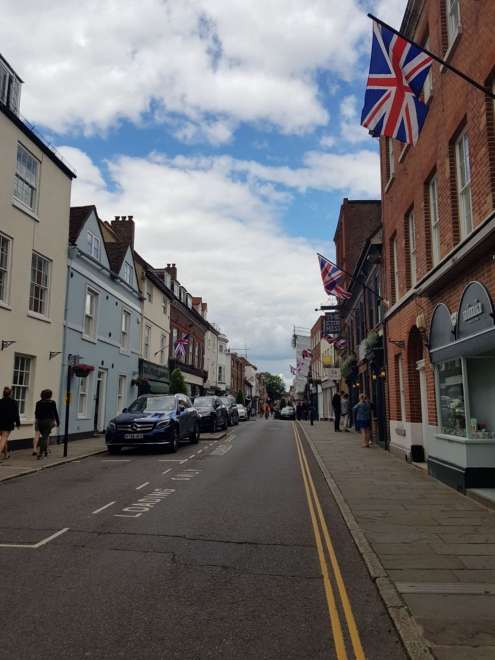 The city of Eton

The quiet, deserted streets of Eton were all we needed for a tourist-filled Windsor. A walk along the main street, lined with shops and hoisted flags to celebrate the May holidays, gave everyone a touch of old-fashioned nostalgia. 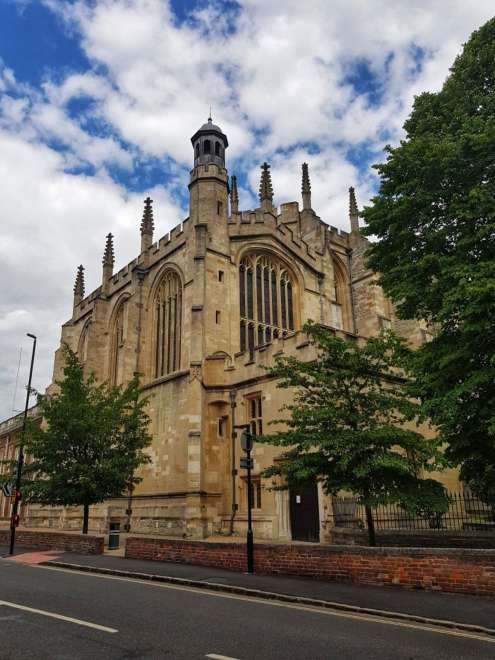 Chapel of the Eton College

The town is small, but you will still find such historical gems as the chapel of the boys' dormitory Eton. It was supposed to be twice as long, but the plan was never completed due to the fall of its founder Henry VI.

Right opposite the chapel you will find other magnificent historic buildings, where after about 20 minutes of searching the Internet, I finally found out that these are Memorial buildings – ie school buildings for the purposes of the library and auditorium.

Finally, we got to that famous school building, which is one of the real elites in the education of unfortunately only young men. The brick red buildings shine on the green lawns into the distance since its founding by Henry VI. in 1440. We were thrilled by the large open-air gardens, where you could relax on a bench under the rustle of trees and the river in the background. 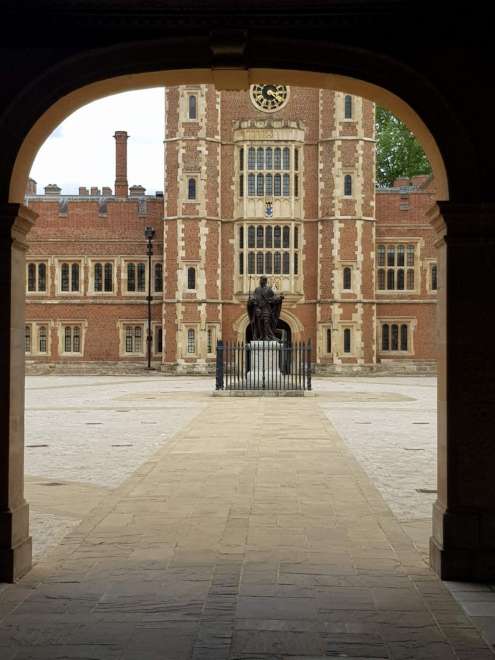 View through the gate of the Eton School

Unfortunately, we were denied access to the school dormitories because a private event took place here. Still, I couldn't forgive myself for documenting the courtyard.