Dominika Charvátová
Wrote 119 articles and follows him / her 11 travelers
(1 rating)
Cities Walks
© gigaplaces.com
Suitable for:
Families with a stroller
Seniors
Hikers
Excursionist
Travelers
They been there:

I am adding a tip for a full day walk through London, if you want to avoid the crowds of tourists and the most crowded but also crowded places. We liked this trip because it offers an unconventional view of the city, both from the height of the cable car, a modern financial center from Wall street, free rest in the animal park and finally you can see the center from the river.

Start of the route

We will start the route with the Jubilee Tube to North Greenwich Station. From here it is only a few steps to the beginning of the cable car. 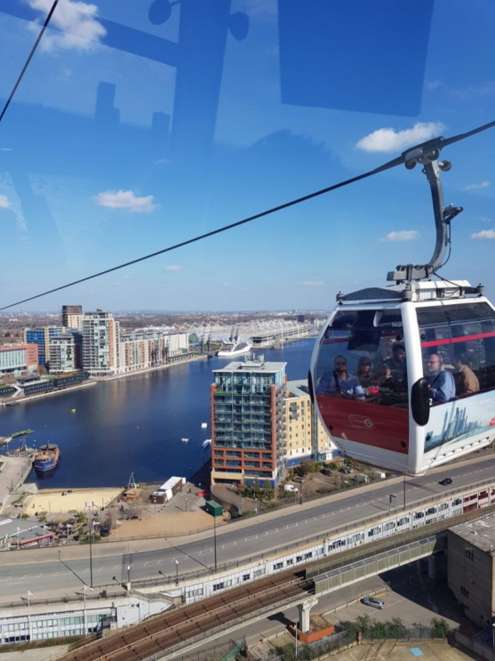 A cable car that leads from the Greenwich Peninsula, a short walk from the O2 Hall, across the river to the docks will allow you to fly over the Thames. The journey takes about 10 minutes and a one-way ticket costs about 7 pounds. You pay with either the Oyster card or a payment card, which I recommend using for regular transport in London. There is a beautiful view of the entire width of the River Thames, the O2 arena, the docks and the new financial center of Canary Wharf, where our steps will follow immediately.

The cable car will take you to the other side of the Thames, from where you can reach the Dock´s light railway (DLR) from Royal Victoria to Westferry in about 15 minutes. This moved you to London's Canary Wharf. First we will walk around the London Docks Museum, which is free and very interesting.

The original City of London financial center has been replaced by the ever-growing Canary Wharf. This is where you will find the headquarters of most of the world's largest banks. At Canary Wharf Tube Station in the middle of this section, we find ourselves after a short walk along the docks. Here you will be surrounded by sky with creeping skyscrapers and so all enthusiasts of modern architecture will enjoy themselves here. 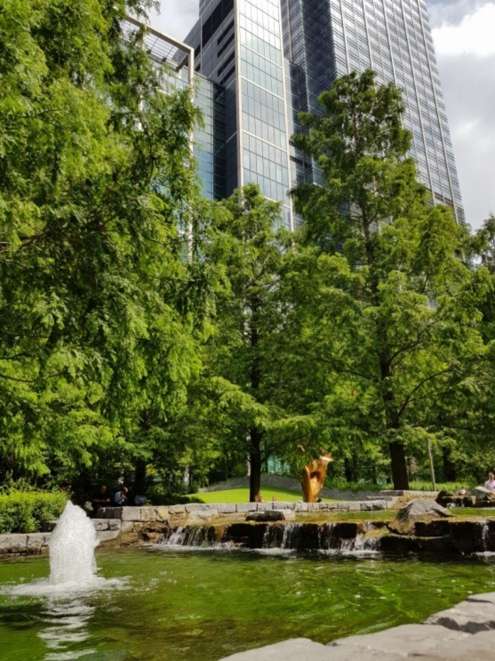 Right behind the entrance to the metro you will find a hidden small park, which is styled in the Zen gardens. Surrounded by glass giants, this oasis of calm hides a pond with cascading overflows and golden carps. You can relax it, gain peace and eat you a snack, for example.

A pleasant walk between the docks will take you across the footbridge to the southern part of Canary Wharf. You can enjoy the countless modern skyscrapers around, which grow every day.

Here you will find really interesting shapes and designs of modern buildings, which, however, complement each other. Their reflection on a constant river surface draws symmetrical shapes. 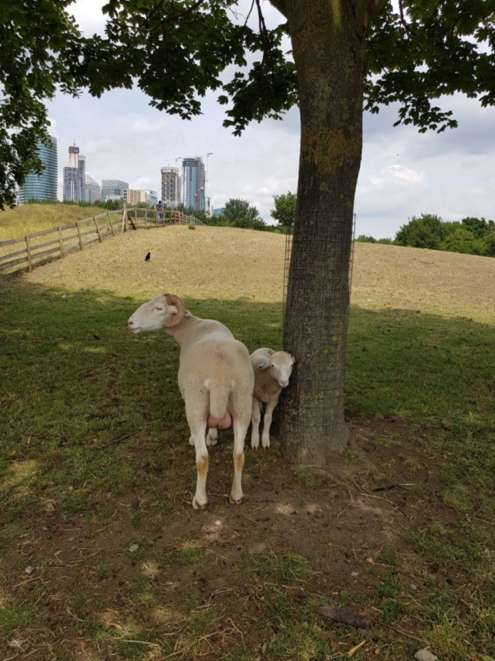 Animal park with a panorama of skyscrapers

Further south, it connects to Canary Wharf Mudchute Park, where you will find an animal farm. Admission is free and you can enjoy sheep, goats, llamas and other animals. They may be fed on grass or purchased pallets. Even the largest and the youngest visitors will have fun here. Squirrels often roam here. Who would have expected sheep to graze on a pasture with skyscrapers in the background. 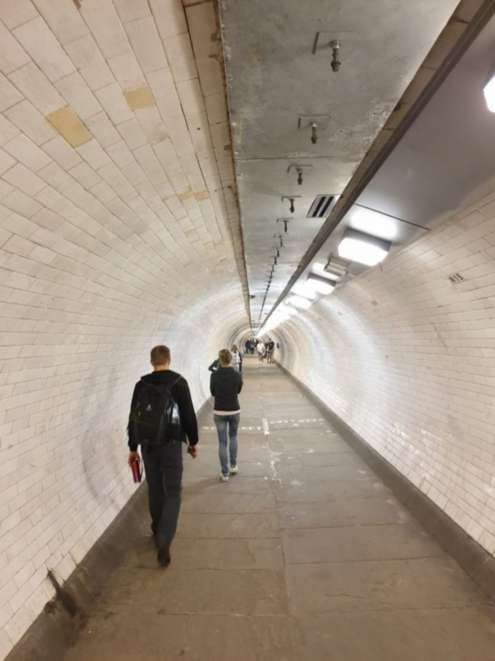 A tunnel under the Thames

Behind the park we reach the banks of the river Thames. From here across the river is a beautiful view of Greenwich Marine College and the park on the hillside behind it. We will also continue here, but only after crossing the river through a pedestrian tunnel, which connects both banks of the river since the beginning of the 19th century. At the end of the north side, the tunnel is narrowed because it was hit by a bomb during World War II.

On the other side of the river, a part of London called Greenwich awaits you. After exiting the underpass under the river, the historic sailboat Cutty Shark rises in the square. It is a sailing ship of a pirate who robbed Queen Elizabeth I and also sailed on this ship. You can see it either from the outside for free or you can get to her keel for an entrance fee.

I recommend climbing Greenwich Park, where there is an astronomical observatory and the zero meridian sign at the top. There is an entrance fee to the observatory, but on the line that definitely the meridian you can get through a narrow black gate under the indicator of the original measurements (yard, reach, inch and elbow). The effort you put on the climb (it's not that high;)) pays off, because there is a beautiful view of the sea railway below you and the whole of Canary Wharf across the river.

House of Queen Elizabeth I.

Below the hill behind the dormitory is an inconspicuous white palace. This is the house where Queen Elizabeth I lived, which you can see for free. It is full of interesting paintings, but the interior and spiral staircase are worth a short visit. The house is newly equipped with elevators, so it is wheelchair accessible.

On the way back to the river you can stop at the market in Greenwich, which has stood here since 1737. You will find a lot of handmade gifts, paintings and you can still find yourself in the street food stalls. 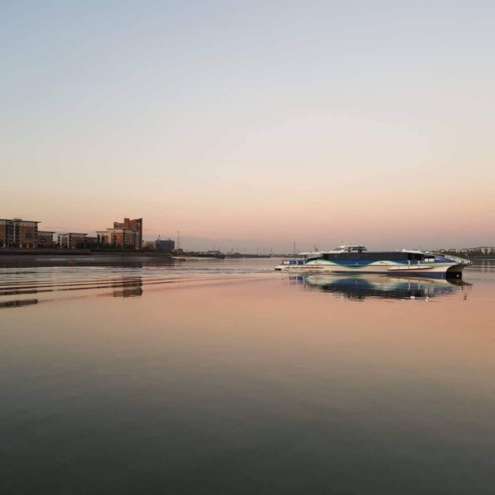 Boat ride to the center

We like to end our trip with a boat ride Thames clippers. It is a city ferry, so an Oyster card or payment card applies to it. It is a pleasant 40-minute drive to the center of Westminster (depending on the connection and the number of stops along the way). Because this type of shipping is under urban transport, the price is about £ 7. A ticket for a classic tourist cruise boat ride costs around £ 20.

Slightly different views from the boat of the city

On the ship, you can make yourself comfortable in soft seats or on the open aft deck. There is a bar and toilets. But the best are the views of the city, which from the boat are different from what you know from the shore. 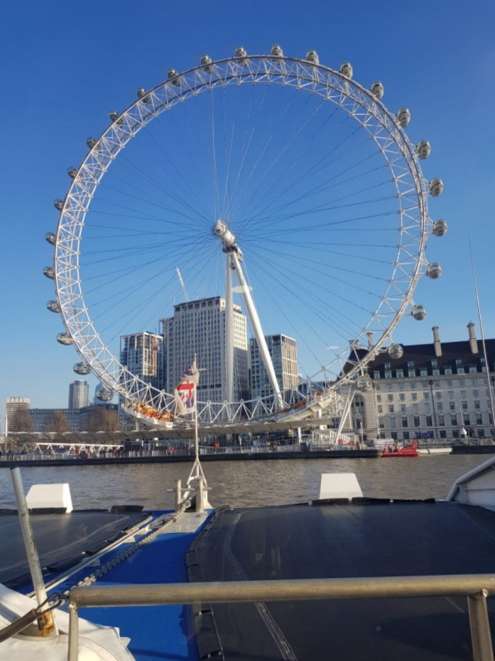 The final station under the London eye

We end our all-day walk in the city center, either at Westminster Station under the Houses of Parliament or on the other bank under the Lonon eye.