A comfortable walk along a wild river

Martin Javorský
Wrote 191 articles and follows him / her 8 travelers
Trips with babies and small children Walks
© gigaplaces.com
Suitable for:
Car tourists
Families with children
Families with a stroller
Hikers
Excursionist
They been there:
+5

The river Mumlava and the attractions on it are among the very popular destinations for walks from Harrachov. The great advantage of the whole route is that it leads along a comfortable asphalt road, which is also suitable for prams and wheelchairs. The route from the bus station to the kiosk leads along an asphalt road to a permanent gentle hill and is 5.8 km long in one direction.

The name of the mountain river Mumlava is derived from the verb „Mumlat“ and really if we listen to the sounds flowing from the riverbed, then we must agree with that. The river has created a picturesque riverbed in the local granite bedrock with numerous rapids and cascades.

After 1.2 km of comfortable walking, we reach the biggest local attraction – Mumlavský waterfall. The waterfall is 9.9 meters high and almost 10 meters wide and it is a solid sloping waterfall with cascading features. him a very attractive icefall. It is interesting that shots were filmed here for the film „Honeymoon to Jiljí“, „Accumulator“ and some fairy tales. On the way above the waterfall, it is possible to have a snack in the kiosk or in the Mumlavská bouda restaurant.

In Mumlava, as in one of the few places in our country, we can see „giant pots“, which he sometimes calls „devil's eyes“. It is an interesting natural phenomenon created for thousands of years by the whirling of water in the bedrock rotating with sand. Sand and later small stones slowly grind the dimple in the bedrock and form a small bowl. Over time, the stones enlarge and grind an ever larger hole. After thousands of years, a „pot“ with vertical and sometimes overhanging smoothed walls and a rounded mouth has been ground. Here in Mumlava, some pots are even deeper than 2 meters, the largest ones have a diameter of up to 6 meters. 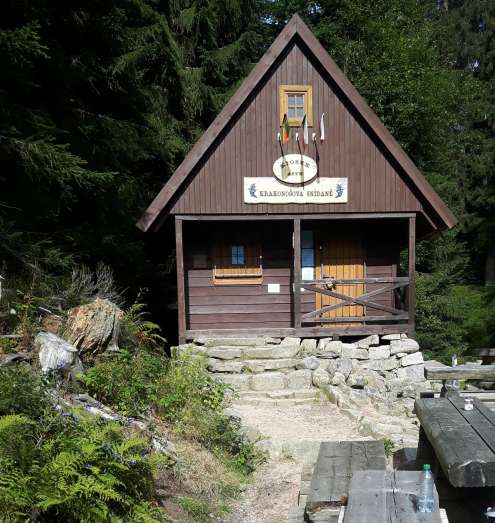 The walk ends at a resting place at an important crossroads of hiking and biking trails in a place called „Krakonoš's bre­akfast“. This is where Mumlava originates at the confluence of Malá and Velká Mumlava. After relaxing on the benches and in the summer also refreshments in the local kisok to the possibility of going the same way back or choose a steep ascent to the ridges.

Excursions along the river Elbe

The most beautiful circuit in the heart of the Giant Mountains

In the footsteps of the tragedy of Hanče and Vrbata

Giga List: The most beautiful tours of the Giant Mountains

The Krkonoše Mountains are the highest Czech mountains and not only because of that, they offer great conditions for hiking. In… continue reading