Dominika Charvátová
Wrote 119 articles and follows him / her 11 travelers
(3 rating)
Cities
© gigaplaces.com
Suitable for:
Beach loungers
Families with children
Seniors
Hikers
Holidaymakers
They been there:
+3
They want there:

Málaga is a beautiful historic city in southern Spain in the region of Andalusia. It is also a port city, which is the second largest in the region after Seville. The city has its own airport, so transportation here is very easy. The destination is suitable both in the winter months, when you can pleasantly walk through the city with historical monuments and warm up a bit. At the same time, in summer it is a typical destination for lovers of beaches and the warm Mediterranean Sea.

Ascent to the view of the city

We started our tour of Málaga by climbing a hill in the city center, at the top of which is the medieval fortress Castillo de Gibralfaro. There are several paths up, whether the paths are more or less steep, or you can reach the top by car. The views on the way up are magnificent, so it doesn't hurt to stop enjoying yourself more than once.

At the top of Monte Gibralfaro, which has 130 meters of altitude, there is a majestic medieval fortress or Castillo de Gibralfaro. Its massive stone walls and narrow paths along the walls suggest that its purpose was to serve as a defensive fortress. After all, the fortress served as a military fortress until 1925. 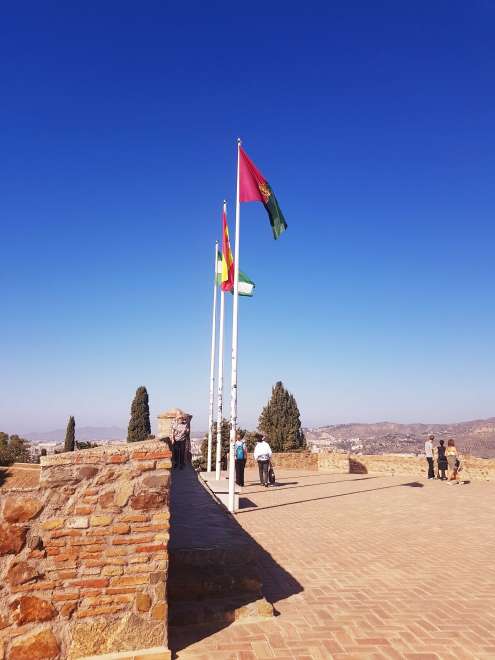 Square on top of the fortress

At the very top of the fortress, which can be reached by a narrow staircase, there is a larger square, which is surrounded by high walls. Nevertheless, from here there is a great 360 ° view of the entire city, both the city and the harbor below you, as well as the mountains rising behind the city.

View from the top of the fortress

The view from the top of the fortress to the south offers a view of the large city port and the surrounding city beaches. The altitude meters that we climbed along the path a while ago are covered with pine and eucalyptus trees, which have been planted here since 2005. When climbing upwards, they provide tourists with pleasant shade and still smell beautiful.

Descent down to the city

The way down also led in the pleasant shade of the forest, and what we met below was a better view of the dominant cathedral, which rises in the city center. The surrounding lower houses with red brick tiles on the roofs complete the character of the city. Under the fortress, we passed another historic fortress on the descent, the Alcazaba. It is a Moorish fortress from the 11th century, built on the ruins of a Phoenician palace. It was built for the Moorish king of Granada and enlarged in the 14th century. It is also interesting for its double walls. 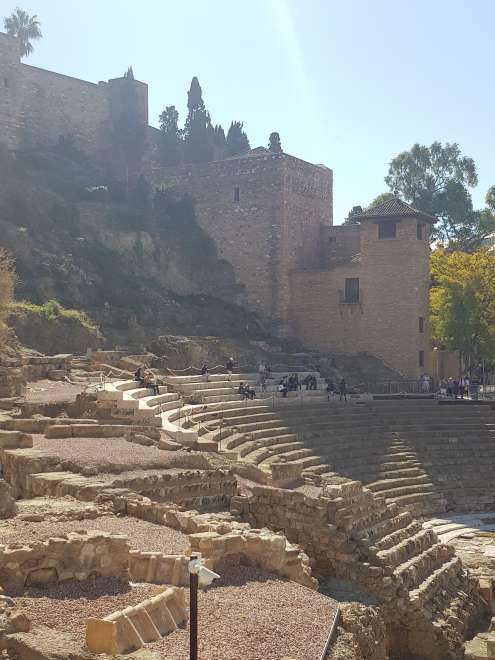 The ruins of the Roman amphitheater

Under the walls of the Alcazaba, we rested near the ancient ruins of the Roman amphitheater. The scenery of this former theater and the small square in front of it, gave the street musicians the right relaxed Spanish atmosphere. 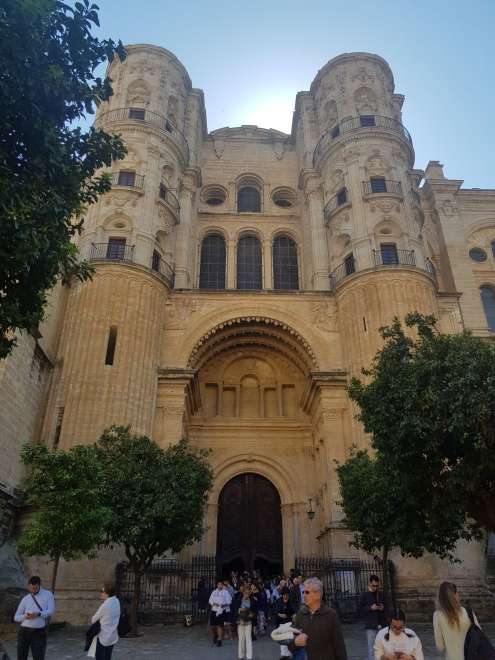 Cathedral of the Incarnation

We arrive at the majestic cathedral in the very historical center of the city just around Sunday noon, when the locals go out after the service. Spain is a very Christian country and customs, such as regular church visits, are still largely observed. The bell at the church accompanied our entire visit to the city by regularly ringing a quarter, a half, a three-quarters and a whole.

The main intersection of the cathedral

We walked around the cathedral from all sides and its ornate facade is truly magnificent. It gained its place in 1528, when it was built by Christian conquerors instead of a large mosque. It is also called La Manquita („the one-armed one“) because its second tower was never completed due to lack of money.

Right in front of the cathedral facade, the Episcopal Palace, which stands in Plaza del Obispo, attracted us with its decoration and distinctive color. 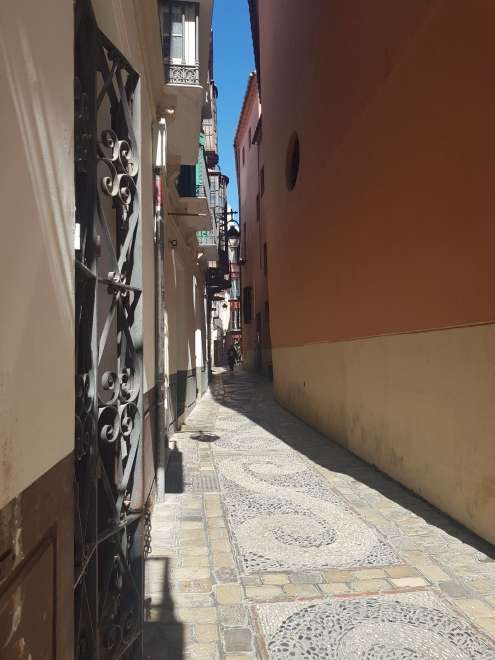 Historically, the character of the city is indicated not only by the monuments but also its winding and narrow streets, which have been here since the Middle Ages. The romance of small cafes and decorative balconies can be felt on every corner. The narrow streets also have the advantage that the surrounding houses provide pleasant shade when you walk through the city on a hot day. The city has been full of artists since ancient times, so you probably won't be surprised that this is the hometown of many famous artists, such as Pablo Picasso, who also has a museum here.

The city has its own distinctive architecture. Here you will find many historical monuments and houses, interwoven with alleys that converge into smaller squares or wider promenade streets. Pleasant refreshment on a hot day is provided by fountains in the arid city, which are in themselves architectural gems. For example, this fountain in the Plaza de la Marina by the port was two-storey, so you could go up the steps to the fountain. 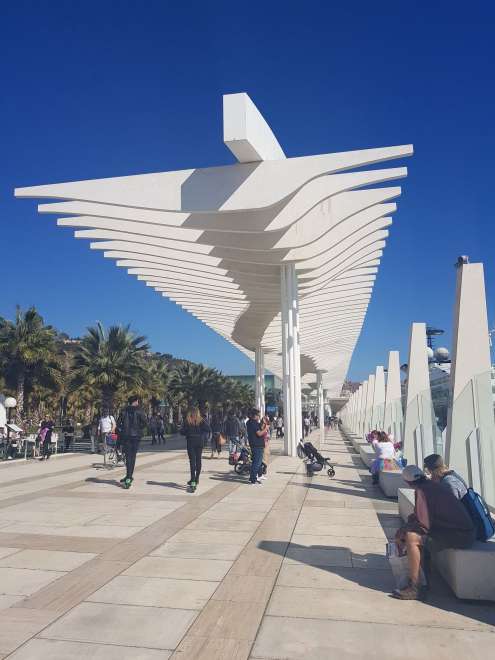 However, Málaga does not lag behind modern contemporary architecture either. Evidence of this is, for example, the modern promenade along the port-Paseo del Muelle Uno. As you walk, you pass several museums and a large sea aquarium on one side, and large ocean liners park in the harbor on the other. As in most Spanish cities, it starts to get the busiest after sunset. Artists often perform in the squares, so you can listen to an outdoor concert.

The port itself is an interesting location in Malaga. Whether you enjoy watching the incoming giant multi-storey steamers, or you want to walk along the harbor to the pier to the lighthouse. You will find many opportunities to sit with renowned Andalusian cuisine or wine.

Tour of the La Mota fortress

Andalusia is the most interesting part of Spain for many travelers. It offers beautiful cities, countless huge castles,… continue reading

Thanks to low-cost airlines, Malaga is one of the most popular destinations in Andalusia. Malaga itself is very nice and can… continue reading