Historic town on the Elbe

Petr Liška
Wrote 2214 articles and follows him / her 204 travelers
(2 rating)
Sightseeing Cities
© gigaplaces.com
Suitable for:
Excursionist
They been there:
+2

At the eastern end of Central Bohemia lies the city of Kolín, which is more than 30,000 in size. The city is picturesquely situated on both sides of the Elbe. The city boasts a beautiful Charles Square and the Cathedral of St. Bartholomew. Thanks to the nearby and better-known Kutná Hora, however, it is unfortunately somewhat neglected by foreign tourists.

The historical center of Kolín is undoubtedly the picturesque Charles Square (110 * 80 meters) with a nice baroque fountain in the middle.

The most picturesque view of Charles Square is through the fountain and plague column to Cologne's Neo-Renaissance town hall.

Kolín City Hall is one of the most beautiful town halls in the Czech Republic. Therefore, you will not understand how they could stick a modern cube to it.

Charles Square from the west

From the „other“ side of the square you can see the towers of the cathedral and the bell tower. We're heading in that direction now.

Views of the cathedral

From Charles Square, take Kutnohorská Street. With two windows (Karlova and Parléřova streets), you can at least get a little idea of the mighty cathedral of St. Bartholomew

Church of the Holy Trinity and Capuchin Monastery

To the east, the city center ends at the Capuchin monastery and the Inedible Park.

Interior of the Church of the Holy Trinity

If the church is not open, all you have to do is look at it through the window.

View of the Cathedral of St. Bartholomew

Comenius Park itself is more of a recreational place for locals than attractions for tourists (there is a playground, a statue of Anastasia Opask and a piano). So go back to the center along Zahradní Street. Cologne Cathedral is so cleverly built up that the view of it is blocked from almost all sides.

Along the busy street Politických vězňu (inner city ring road) you will come to a roundabout, which is dominated by an interesting building of the former district general bank. From here we finally head to the cathedral. 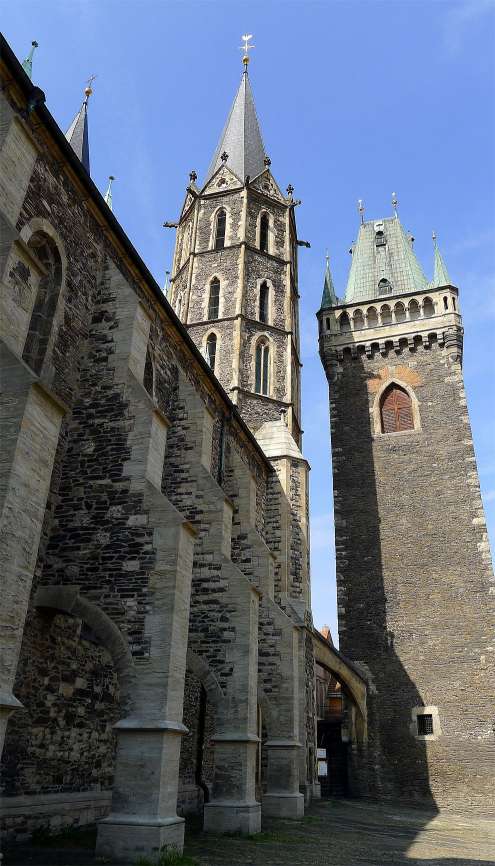 The most important building in the city is the Cathedral of St. Bartholomew with interesting octagonal towers In addition, a tall bell tower is literally glued to it. The cathedral is surrounded by picturesque alleys, but it lacks some space around it to really see its monumentality.

Next door is a sundial telling us this wisdom: „Time passes – if we have time, let's do good“

Road to the synagogue

From the cathedral, take Karolíny Světlé Street towards the Cologne Tourist Information Center, behind which is the Cologne Synagogue. 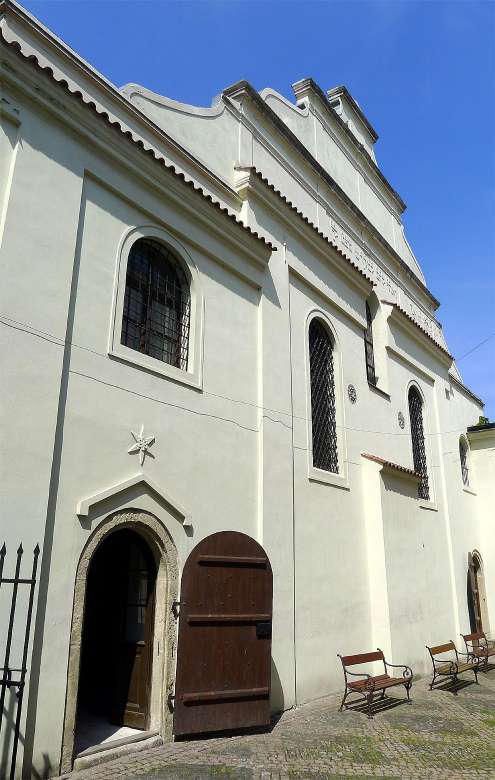 The Kolín Synagogue is one of the oldest and most important in the Czech Republic. It stands in the courtyard and can be reached via the Cologne tourist center (entrance 40 CZK)

Ask for the keys to the Old Jewish Cemetery at the Tourist Information Center (free entry). It is about 400 meters west. Definitely worth a visit. It is one of the oldest and largest in our republic.

From the Old Jewish Island, continue to the railway station, from where a footbridge leads to the adjacent Kmoch Island – a recreational part of Kolín with playgrounds.

From Kmoch Island you can get to the other side of the Elbe over a large bridge for pedestrians and cyclists (there leads the 2nd Elbe cycle path).

On the other side of the Elbe, return east to the large Masaryk Bridge. Along the way, enjoy the view of the historic part of Cologne.

From Masaryk Bridge, it is a short walk to the main square in Cologne, where the sightseeing circuit closes.

A tour of Kutná Hora

A tour of the Kačina chateau

A tour of the Smokes