Libor Štěpán Dubský
Wrote 36 articles and follows him / her 1 traveler
(1 rating)
Castles and ruins
© gigaplaces.com
Suitable for:
Car tourists
Families with children
Families with a stroller
Seniors
Hikers
Excursionist
They been there:
+8

The largest castle ruin in Bohemia stands on an elevated promontory above the Otava River.

Rabí Castle was probably founded in the first half of the 14th century by the Lords of Rýzmberk. The castle became their ancestral seat and at the same time served to defend the upper Pootaví. During the Hussite uprising, the lords of Rýzmberk sided with Sigismund of Luxembourg. The troops led by Jan Žižka of Trocnov twice besieged and conquered the castle, in 1420 and 1421. During the second siege in 1421, Jan Žižka lost his second eye. During the conquest, the Hussites severely damaged the Rabbis, but the then owners received financial compensation for their devotion to Sigismund of Luxembourg, so they were able to rebuild the castle. So many few lines of the long history of this castle.

The parking area is located directly below the castle on the square. Parking is paid. The beautiful view of the castle is from the direction of Horažďovice. Park your car at the cemetery and walk through the meadow. There is a way. From this meadow there are very nice views of the castle and the castle church of the Holy Trinity. And those photos from this place ..... 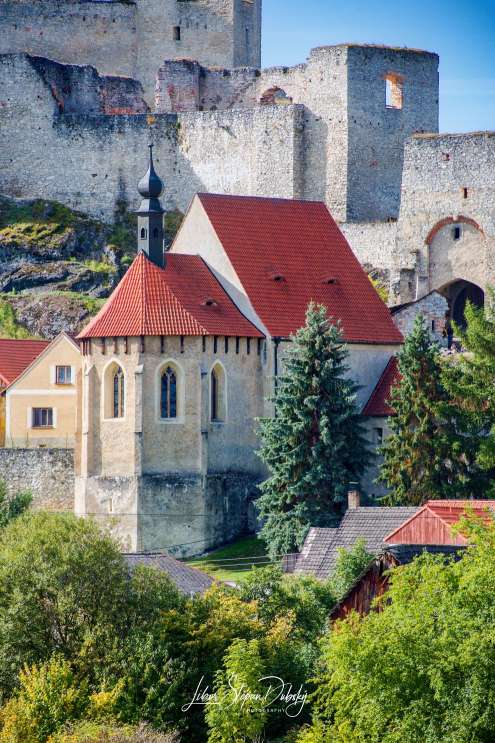 The castle church of the Holy Trinity was probably founded in the 14th century, but was not consecrated until 1498. The church basically retained its late Gothic appearance, although its appearance was affected by modifications in the following centuries (in the 17th century a sacristy was added, in 18 century, a vestibule and a sanctuary tower were added). Significant alterations touched the interior, the appearance of which was supplemented and changed several times, so that in the 20th century there were documents of almost all art styles in the interior, starting with Gothic and ending with Art Nouveau. The church is currently inaccessible to the public. In the summer months, only the basement of the church where the exhibitions are held is open.

The largest castle ruins in Bohemia

Author: Libor Štěpán Dubský © gigaplaces.com
Applaud the author of the article!
Share it on:

The town of Kašperské Hory

Statue from Easter Island in the Czech Republic

Hike along the Otter