One of the oldest medieval castles in South Bohemia

Martin Javorský
Wrote 204 articles and follows him / her 9 travelers
Castles and ruins
Author: Martin Javorský © gigaplaces.com
Suitable for:
Car tourists
Hikers
Excursionist
Holidaymakers
They been there:

Strakonice Castle was founded at the confluence of the Otava and Volyňka rivers by the Bavarians as early as the beginning of the 13th century. In 1402, the Order of the Knights of Malta bought the castle, which moved its convent here from Prague in 1420. Today, the castle is a national cultural monument.

Originally a Gothic castle, it was rebuilt many times, which is why it combines a number of architectural styles. The Order of the Knights of Malta had it modified into a Renaissance style. In the years 1714–21, a baroque castle was added to the castle.

Looking at the second castle courtyard, we see the castle palace on the right. In the back you can see the originally Romanesque church of St. Prokop founded at the beginning of the 13th century

Part of the original defense system from the 13th century is the castle tower „Rumpál“ standing in the middle of the western wall.

View from the tower walkway

A total of 96 very narrow steps lead to the tower walkway at a height of 31 meters. The reward for conquering them is a beautiful panoramic view of the town of Strakonice and the nearby peaks of the Šumava foothills.

In the second castle courtyard, there is a 12-meter-deep medieval circular well excavated as early as the 13th century.

The museum of central Pootaví is located in the southern part of the castle palace. The collection presents the history of the region from prehistoric times, through the Middle Ages to the second half of the last century. 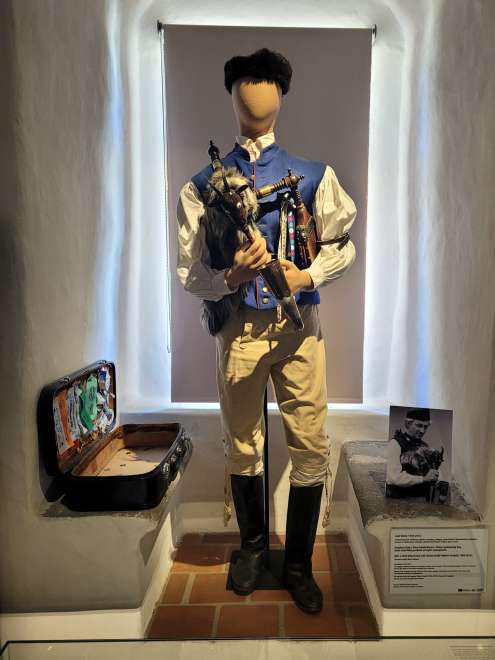 The exhibition cannot miss a section dedicated to Strakon pipers and the production of bagpipes.

The newly renovated black kitchen is part of the museum.

The ground floor of the castle palace houses a museum of world-famous ČZ motorcycles, including other items commemorating the glory of this legendary brand.

Statue from Easter Island in the Czech Republic

Trip along the river Lomnice