Tony Výborný
Wrote 57 articles and follows him / her 7 travelers
(2 rating)
Traveling
© gigaplaces.com
Suitable for:
Adventurers
Hikers
Excursionist
They been there:
They want there:

First of all, Komodo National Park is practically the only place where people can meet the rare Komodo dragon – the largest living lizard, which is often called the „last dinosaur on earth“. But it also offers countless beautiful scenery and an incredibly rich and unique fauna and flora. Komodo is rightly called the most beautiful national park in all of Indonesia.

The most common and also the easiest starting point to the national park is an ever-growing town – Labuan Bajo. Many hotels have started to be built on this site in recent years, and local tourism (unlike other parts of Flores Island) is really booming in the near future.

A trip to Komodo National Park with professional travel agencies, which can also be found on the Internet, is possible, but such tours are really very expensive. However, there is also a much cheaper (and much more adventurous) solution – just take to the streets of Labuan Baju and the locals will start catching you. In every other house, they will offer one-day and multi-day trips, and thanks to the competition, it is possible to negotiate quite well. It doesn't matter which local „travel“ one goes with, because in the end all those interested will be connected to the same or similar boats (according to the number). We all paid a different price on one ship (depending on who could bargain). We chose a two-day trip.

The next morning we took off our snorkels and fins and set off for the port, from where we sailed towards the island of Rinca. The road itself provides beautiful views.

We drove around many smaller islands, including the island of Pempe, where we stopped for swimming and snorkeling later that day. 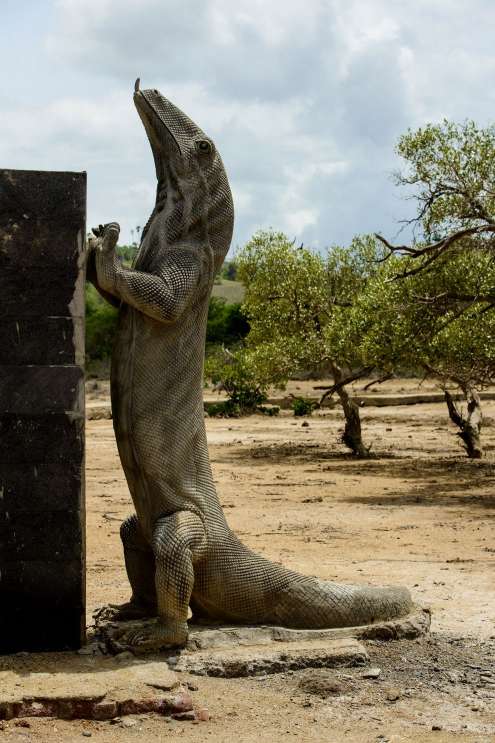 The first stop was on one of the main islands of the national park: Rinca. At the entrance to the park, we were greeted by a large gate with two lizards (so far they were only statues), although we already saw a monitor lizard in the distance on the beach by boat. Entrance to the park is paid separately and is only paid for one day, it is also necessary to pay a guide fee, animal protection fee, snorkeling fee, and other fees, until we sometimes felt that we were already paying fees :)

Skeleton of a buffalo

A buffalo skeleton was waiting for us right at the entrance – probably as a warning that even such large animals are commonly on the diet of Komodo dragons. Nearby, in the shade, was a smaller herd of still-living buffaloes rolling in a mud bath.

There were 9 people in our group from the ship and for such a number we got 3 experienced guides, armed with sticks with a bifurcated end (in the shape of a lizard tongue), which is used to push away in the event of an attack. Among the first four monitor lizards we met were two of the larger individuals.

From the main guide, we learned a lot of interesting things about the life of monitor lizards, but also about other animals that we saw on the island.

We also saw a nest of monitor lizards guarded by a medium-sized female. 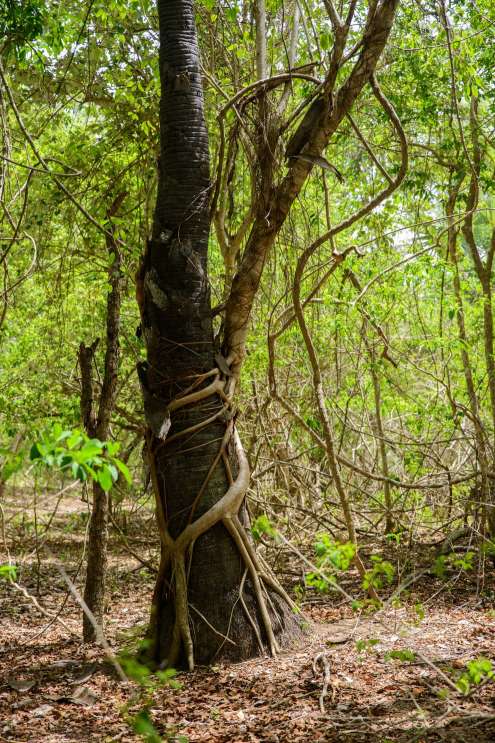 The island also has a very diverse vegetation. The trees intertwined with palm trees were especially interesting.

The farthest point of the circuit we went was the place with water, where lizards occur quite often, but unfortunately we did not meet any there. Instead, we met wild pigs and orange-footed booby, which are large, burrowing birds whose abandoned nests are used by monitor lizards as their own nests. There is also a rather interesting tree on which the skulls of animals are hung.

On the way back, we came across traces of monitor lizards and a smaller individual resting in the shade of trees in the hot heat.

Due to the unfavorable current, we had to change the plan a bit. We were originally supposed to cross to the island of Kalong, which is in the bay of the larger island of Komodo, where we were to observe water lilies (related to bats, but much larger) as they fly out after sunset. Then we had to spend the night in the same bay on a boat. Instead, we first headed back to the island of Pempe, where we had about an hour for swimming and snorkeling.

We saw a lot of beautifully colored fish and corals of various shapes.

Before sunset, we drove only a few hundred meters to the nearby mangroves, which was another place where you could see the waterfowl.

After sunset, the sky turned beautiful, and we waited a few tens of minutes on the first deck of the ship on the upper deck of the ship before they began to fly out of the mangroves. Their size was enormous – it is not for nothing that they are called flying foxes.

Gradually, more and more of them flew out, and the whole parade lasted more than half an hour, there must have been hundreds of thousands of them, and even though it was almost dark, more and more still flew. But the captain of the ship had already ordered that and we had to go back to the island of Rinca, where we spent the night in a quiet bay. The flying foxes were among the highlights of the whole two-day trip – it was an indescribably beautiful spectacle.

The next day we got up early in the morning and drove to the island „Padar“: [https://www.gigaplaces.com/…isrov-padar/], which boasts one of the most beautiful viewpoints in the island. The elevation of the view itself is only about 150m, but in the heat the hike can be quite busy.

At the top, the whole island finds itself in the palm of your hand and from here you can see bays with beautiful beaches, which often change their colors, you can see the beach gray-black with dark volcanic sand, classic white but also pink (colored from red corals). For most of the year, the island is dry, covered only with dry grass and bushes, but sometimes after the rainy season for a short time all green. In the past, monitor lizards also occurred on this island, but due to inhospitable conditions, this will remain only a thing of the past.

After returning to the ship, we drove to the much larger island of Komodo.

On this island we were again assigned three guides and with them we went to the next circuit, where we saw several monitor lizards.

Although the monitor lizards were smaller on this island (compared to Rinca), the nest we saw here was much larger.

In addition to monitor lizards, we came across a bite of other animals. Of the smaller ones, they were smaller lizards or local bees, of the larger ones, for example, wild pigs. Sometimes it's good to look underfoot, there are quite a few rattlesnakes and here and there a cobra – but we did not come across any snakes. But there is no need to worry, experienced guides would probably see them sooner than tourists.

About ten local deer (sambara island) were lying at the beach at the end of our walk.

Then we moved by boat on the island of Komodo just a little further, swimming on the beach with pink sand. Here, too, there was the possibility of snorkeling among the beautiful corals. Unfortunately, my flashlight unexpectedly ran out here on the camera and I didn't take any more photos.

The last stop of our trip, but one of the peaks, was the so-called Manta Point, which is a place in the sea where huge manta rays often occur, which is the largest species of stingray. Snorkeling and swimming between 4–6m large manta rays was an unforgettable experience. At one point, I counted about eight below us.

Manta rays are not directly dangerous to man, and those who were not afraid to dive a little could get close to them. Although they are not dangerous, it is not advisable to irritate them unnecessarily – after all, waving the fins of such a monster (weighing a ton) can wave a good wave at a person.

Author: Marie-Alix Salome © gigaplaces.com
Applaud the author of the article!
Share it on:

Bali - northeast of the island

A tour of the Goa Gajah Temple