An island for adventure lovers

Tony Výborný
Wrote 57 articles and follows him / her 7 travelers
(1 rating)
Traveling Traveler Itineraries
© gigaplaces.com
Suitable for:
Adventurers
They been there:
They want there:

Flores is one of the less explored areas in Indonesia. Tourism is still in its infancy, which corresponds to both prices and accommodation options, transport and accessibility of some places. The most famous town – Labuan Bajo is the starting point to the fantastic Komodo National Park with the largest lizards on the planet. Other attractions include original spider-shaped rice fields, traditional villages, rainforests and beautiful volcanoes led by Mt. Kelimutu with three ponds that change their color…

The most suitable starting point for visiting the island of „Flores“: [https://www.gigaplaces.com/oblast-flores/] is the town of Labuan Bajo. It is also practically the only place where we met tourists in 9 days on the island. True, we were there outside the main season during the rainy season, but from the whole island we met only one group of Czechs in the village „Todo“: [https://www.gigaplaces.com/misto-todo/].

We chose accommodation in the hotel Gardena, which is relatively cheap compared to others in the area offers beautiful views (especially in the evening), beautiful gardens and cottages and the staff is really nice and helpful.

Beautiful cave „Rangko“: [https://www.gigaplaces.com/misto-rangko/] is only 12km away from the town of Labuan Bajo, but it is not easy to get to it, as it is accessible only by boat. We set off from Labuan Bajo on a rented scooter and we haven't even managed to leave the town yet, and a local has already stuck to us and will take us there. We tried in vain to explain to him that we had a map and GPS, so he drove all the time in front of us, making sure he didn't lose us even though we made a lot of stops to take photos. In a nearby port, he then took us to a local „agency“, where he told us that he had a ship to take us there, and bargaining on the price began. She seemed very exaggerated to us, but later we admitted that the guy got quite well. Half of the route had to be covered without an engine due to the low level. From the pier is a cave only about 150m away and the entrance to it is quite slippery.

From the pier is a cave only about 150m away and the entrance to it is quite slippery.

Swimming in the cave

Swimming in the cave is allowed, the water is quite pleasant and swimming between the stalactites is an unforgettable experience.

The two-day trip to the islands of Komodo National Park was so amazing that it deserved its own „article“: [https://www.gigaplaces.com/clanek-komodo/]. Observations of monitor lizards, fruit bats and other animals, beautiful landscapes and many other experiences. This trip is a must for every visitor to the island of „Flores“: [https://www.gigaplaces.com/oblast-flores/].

The view on the island of „Padar“: [https://www.gigaplaces.com/…sland-padar/] is breathtaking.

From Labuan Baja, we moved by local bus to the „Ruteng“ area: [https://www.gigaplaces.com/…e-u-rutengu/].

Ruteng rice fields „Rice fields“: [https://www.gigaplaces.com/…s-in-ruteng/] near the town of Ruteng have a very unusual cobweb shape. This shape has its historical origin and reason. The individual fields were divided according to significance. The most powerful and influential people had fields on the edge – hence the largest area, while the poorest had small fields in the middle. The best view is from a small hill in the adjacent village of Rai.

One of the traditional villages near Ruteng is the village „Todo“: [https://www.gigaplaces.com/misto-todo/].

Although the village is not as large as the more famous Wae Rebo, it has only 5 typically conical houses, but it is much more easily accessible.

The dominant feature of the village is the largest „royal“ house, where only men are allowed. 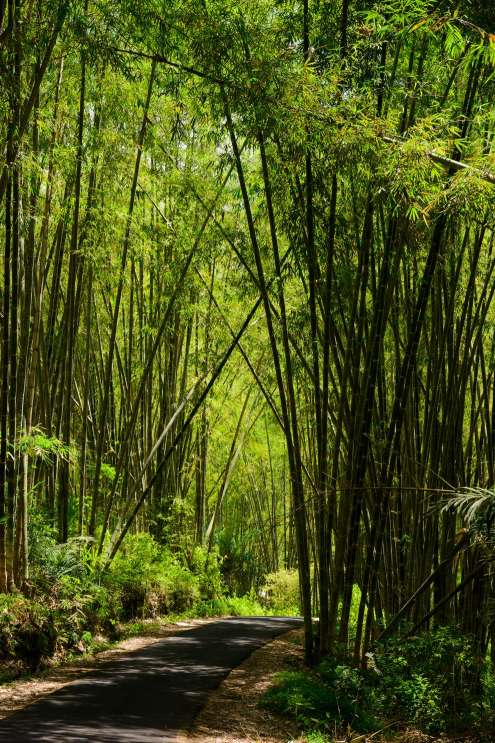 Scouting the island is the best way to explore the area. Roads are sometimes lined with bamboo. It can be rented almost anywhere.

The whole island is beautifully green.

The village lies directly below the volcano „Inerie“: [https://www.gigaplaces.com/…opka-inerie/].

In the back of the village you can climb to a small but beautiful view.

Another traditional village near „Beny“: [https://www.gigaplaces.com/misto-bena/] – that's what's left of it.

The village burned down a few months before our arrival, leaving only an empty courtyard with charred stakes. 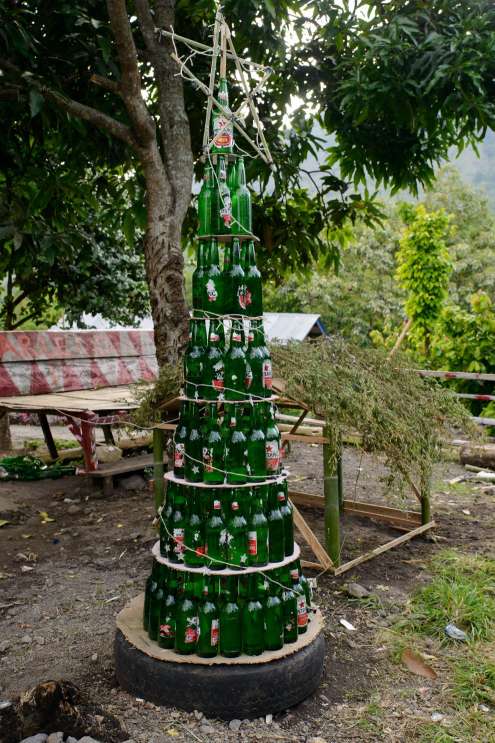 The island of „Flores“: [https://www.gigaplaces.com/flat-flores/] is largely Christian, so during these holidays the streets are full of Christmas trees made of various materials, including beer bottles. We've even seen one built from PET gasoline bottles and wrapped in worlds. 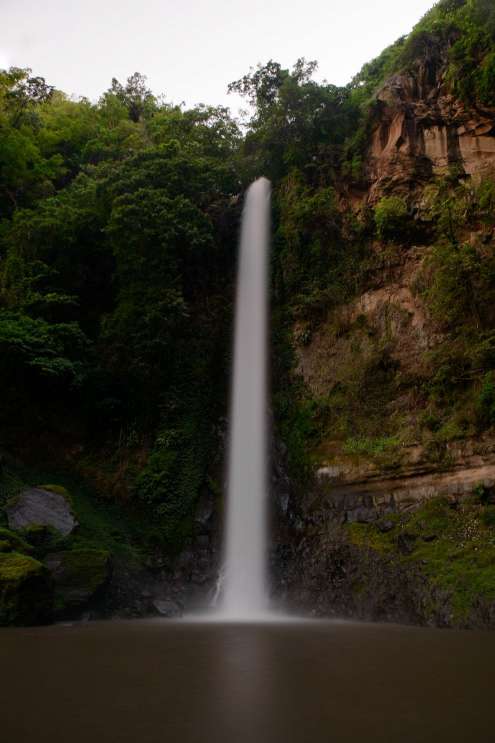 Kouksek od Bajawy is a beautiful waterfall Ogi. We didn't reach him until it was dark, and on the way back to Bajawa we found that the headlight on the scooter was not on. The ride was quite unpleasant, so it is advisable to check the rented scooter properly.

The next crossing took us to the town of Ende.

One of the last stops was supposed to be Mount Kelimitu, which offers a view of 3 different colored lakes. However, due to rain and time constraints, we did not succeed.

The last stop was the city of Maumere, from which we flew to another island of Indonesia – Bali. Maumere did not dazzle us in any way, the only interesting part here was a very dirty and poor fishing village on the water.

Bali - northeast of the island

A tour of the Goa Gajah Temple