Dominika Charvátová
Wrote 119 articles and follows him / her 11 travelers
(1 rating)
Hiking Hiking circuits & Trekking
© gigaplaces.com
Suitable for:
Car tourists
Families with children
Seniors
Hikers
Excursionist
They been there:
They want there:

Exmoor is a national park located on the shores of the Bristol Channel in the south west of England. The park covers two counties, Somerset and Devon. Here you will find unspoilt wild English nature, bare hills covered with heathland and lowlands with grazing sheep on pastures. The area is also home to a historic breed of wild horse – the Exmoork Pony. The park is interwoven with hiking trails and narrow roads for cars, their width is very variable.

The medieval village of Dunster

At the very east end of the park is the picturesque historic village of Dunster. Its dominant feature is a medieval stone castle sitting on a hill. The original medieval alleys and houses have also been preserved in its castle grounds. You can also walk to the adjacent gardens, where a lively stream flows and leaves behind a roar.

This monumental medieval castle can be seen from the distance of the driveway to the city, because it rises on a hill above the city. It forms an inseparable backdrop to most views of the town. On the opposite hill behind the village, he is accompanied by a stone tower of a lookout tower, where a walking path leads. 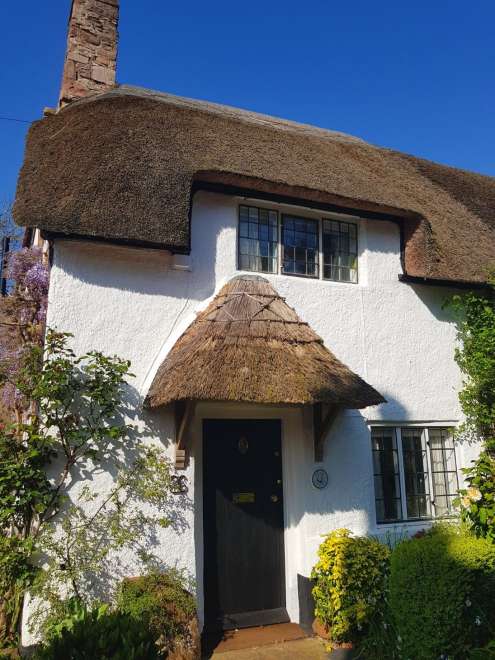 In the town, most of the house tries to keep the tradition of typical thatched thatched roofs, which are traditional in England. The walk around the city itself is an experience in person, because each house is unique and so ornate that the eyes cross. Picturesque landscaped gardens, which were overflowing with flowers from spring, completed the whole scenery.

In the national park you will find countless historic original stone bridges for pedestrians, in the best case and for something worse for cars. Their width has not changed since the wheelbarrows, which will not please many drivers. Nevertheless, their presence in every other village gives the place the real fairytale touch.

Our first stop in the true wilderness of Exmoor Park was the view to the northeast. It is easy to get here by car, even if the road is blind, so it was enough to leave the car in the parking lot and walk to the top of Selworthy Beacon on your own. There are also several routes around it, which offer a nice walk through the circuit and distant views of both pastures and hills as well as the sea.

View of the Exmoor pastures

Although there are some hills in the park, don't expect any high mountains. Even from the top of the hills overgrown with mostly heather, you can see into the valleys, where there are green pastures with sheep.

The Exmoor Pony is a historic original breed of smaller horse that has been present in the area for centuries. He lives here freely without human intervention. Sometimes you will meet them standing by the roads or parking lots, but they will not be caressed. After all, they are only at home and we are only visiting, so all visitors respect them.

View of the beach

Beyond the village of Porlock, which lies in the valley named after it, the road winds back high to the ridges of the mountains. The cars just snort into the serpentine narrow roads and pass almost to the touch of the right mirrors. But this effort is redeemed by the sight of a magical horseshoe-shaped bay and endless moors. We passed a lot of areas burned by fire. Unfortunately, the English habit of having a picnic is not limited to cold sandwiches.

A ride through the national park on winding roads along the ridges of the mountains is an experience that will be etched in your memory. It is only necessary to pay attention to the ubiquitous and free-ranging sheep, which often graze in peace on a piece of grass next to the road. 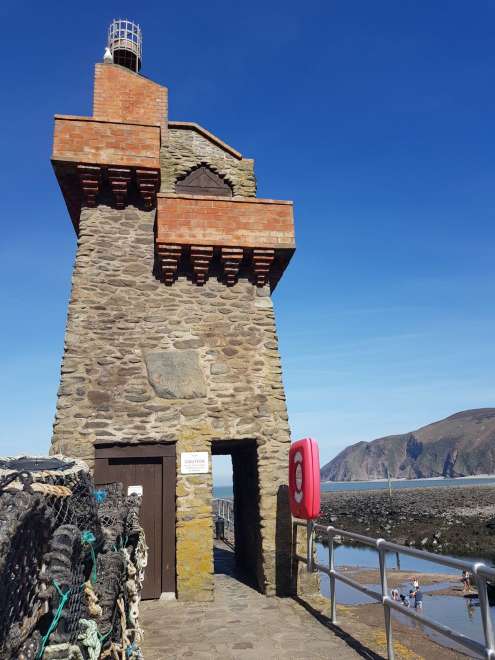 The seaside town of Lynmouth

Lynmouth The town of Lynmouth, located in the north of the park by the sea, is surrounded by people only a few weeks if not days a year when it is warm and nice, just as we managed to catch us on the Easter holidays. A river flows through the city, which falls from the mountains behind the city.

The wide grassy banks around the riverbed are used by locals and tourists alike as a small riviera. It doesn't blow here like it does on the beach by the sea. In addition to many souvenir and ice cream shops, you will find a historic cable car, which is all water-powered and takes you to a view over the city.

As if from a documentary about the English moorland and wide slopes, we felt as we passed the highlands from the northern end of the park to its south, where we headed for the next Dartmoor National Park. The locals also come here with a transporter, where they have their pony, and then continue with it on a ride through this godforsaken landscape, as cut from the novels of English writers Jane Austin and others.

Itinerary of a trip to the South West of England

Article: Itinerary of a trip to the South West of England

Four free Easter days, when the forecast promises sunny and above 20 ° C, had to be used for a trip outside the capital to… continue reading