In the Davon region

Dominika Charvátová
Wrote 119 articles and follows him / her 11 travelers
(1 rating)
Mountains Hiking circuits & Trekking
© gigaplaces.com
Suitable for:
Car tourists
Families with children
Seniors
Hikers
Excursionist
They been there:
They want there:

In the heart of the Davon region in the south east of England is the wild oasis of Dartmoor National Park. The area has been protected as a national park since 1951. You will find many opportunities for trekking and walking, but even a ride on the narrow roads is truly spectacular.

At the entrance to the park, the journey first begins with green pastures full of sheep. The paths lead between these pastures and are lined with tall hedges. Driving on these roads is picturesque and at the same time full of adrenaline, because on a winding road with a width of 1 car, you can't see over the fence whether a car is driving towards you around the bend. It then depends on who is closer to the passing point and who will have to back up in the narrow space.

If you want to light up by looking at the little lambs running merrily running along the spears of the park, then I recommend using the extended weekend during Easter. You just won't find such a dose of cuteness anywhere.

The fairytale atmosphere is given to the landscape by a number of stone bridges that lead across countless smaller and larger rivers and streams, without which this south-eastern tip of England could hardly be imagined. Here you will find many preserved bridges made of large stone slabs from ancient times, which are only a tourist attraction. In the villages of Darteet or Stonebridge, you can admire such relics of bridges, whether in all their beauty or partially destroyed, as here in the photo standing in front of a stone arch, which is still in operation compared to his older colleague. 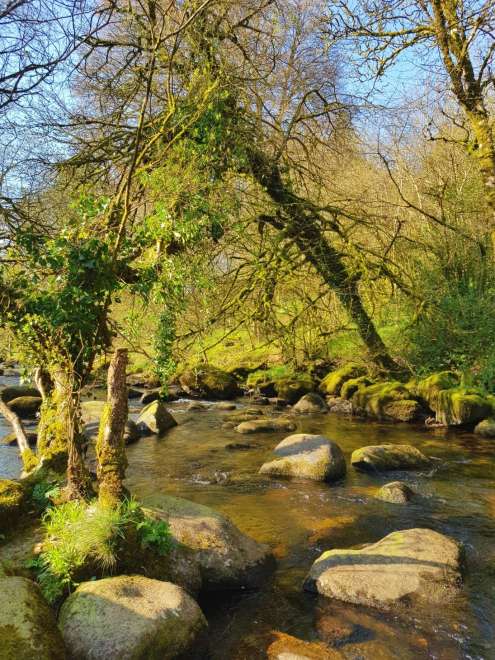 Not only the fauna but also the flora is wild here. The amount of ubiquitous greenery is really breathtaking. Every stone, tree and house is overgrown with some green plant. Whether it's ivy creeping around houses or moss and lichen, which overgrow trees and stones along rivers. There are no limits to the wild.

A short ascent and walk to the Sharp Tor rock massif, which rises dominantly on the hill, is definitely worth a stop. Rocks cracked in horizontal cracks only encourage climbing or bouldering. Sharp Tor provides a 360 ° view of the landscape on a mix of green fields, heaths and wooded valleys.

Menhirs in the countryside

England and Scotland are often visited due to the occurrence of menhirs. You will find the most famous Stonehenge just outside London, but also don't expect to be there alone. On the other hand, for example, you will have this smaller menhir circle lying below the Sharp Tor rock massif (in the background) just for yourself.

A little further behind the rock massif we find an artificially created water reservoir, which helps the landscape to cope better with the number of guards, which are abundant here.

A real pearl forgotten in the middle of Dartmoor is a former stone quarry, which is reclaimed and its center flooded by an emerald lake. In times long past, a small railway line led here from the quarry, which today is reminded only by cut depressions in the stones on the path, which remained here after torn sleepers.

Emerald lake in the middle of the quarry

Inside the quarry you will find a pleasant refreshment on warm summer days as well as peace and grazing for the eyes, when the clear water in the pond turns emerald. The entrance itself reminded me of the gates of Mordor of the Lord of the Rings only during the day and in full variety of colors.

Only the last few Mohicans of the buildings that served their original purpose remain in front of the quarry itself. The inhospitable nature dealt with the massive stone buildings in its own way. The torsion of the buildings thus gives a dramatic impression when we see them set in the green nature on a sunny day.

Torso of the quarry entrance gate

The remains of the surrounding buildings of the quarry and its main entrance gate are reminiscent only of standing stones gnawed by the ravages of time and local inhospitable conditions.

Even in Dartmoor we find a wild original breed of small Exmoor pony to graze freely. They are not afraid of people, but they are not domesticated, so some caresses or delicacies in the form of carrots do not convince them too much.

View over the valley

There are several hiking trails around the water reservoir, which will take you to the top of the hill with rocks. The view into the distance is guaranteed. On one side you can see the reservoir itself and on the other a deep valley of cloudy forests with a roaring river in the middle.

Even car tourism in Dartmoor is full of beautiful views but also dramatic moments. These are usually taken care of by narrow stone bridges, where their width is precisely calculated for one wheelbarrow, but to fit an average car here is a nut. Some bridges have a control gate in front of them, according to which you can test whether the car can fit on the bridge at all.

Itinerary of a trip to the South West of England

Article: Itinerary of a trip to the South West of England

Four free Easter days, when the forecast promises sunny and above 20 ° C, had to be used for a trip outside the capital to… continue reading