Dominika Charvátová
Wrote 119 articles and follows him / her 11 travelers
(1 rating)
Ports Beaches
© gigaplaces.com
Suitable for:
Beach loungers
Families with children
Families with a stroller
Seniors
Excursionist
Holidaymakers
Party people
They been there:

If you are in London and want to enjoy a little sea and summer seaside atmosphere, a trip to Brighton is definitely a good idea. This city is south of London, just an hour's train ride from the city center. You can look forward to long pebble beaches, attractions such as Matějská, bars and countless seagulls, which simply belong to the city.

From the train platform, the main street leads downhill and takes you directly to the beach in a short 10-minute walk. It will open before you in all its breadth and beauty. It is almost never ending pebble beach like on the Riviera, where you will find a promenade for a more comfortable walk.

The dominant feature of the beach is an unmissable pier, where you will find many adrenaline attractions. There is such a smaller Matějská, where everyone can be eliminated. In all the stalls that line the promenade and the pier, there is a whiff of fried fish and chips. This typical British dish is not an integral part of seaside resorts. 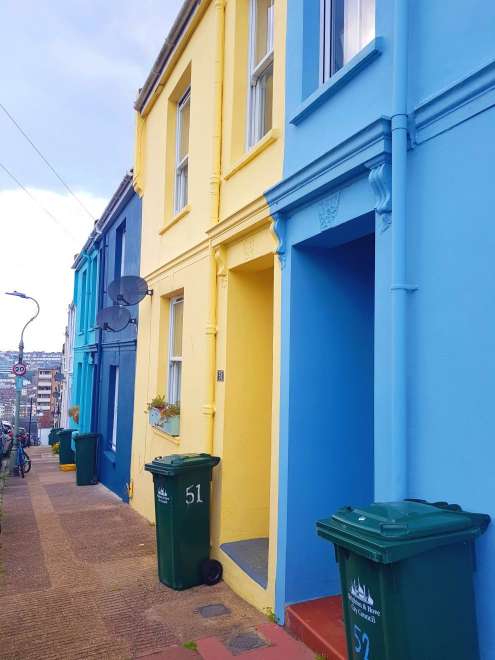 It is also worth a walk in the suburbs of Brighton. Cute two-storey houses are just full of colors. The steep inclination of the streets also adds an interesting angle to the city.

The city has a rich history and it is proudly presented in many places. In the center, in addition to the sprawling modern bars, you will also find such traditional pubs as those cut from the 16th century.

Here you will find several large parks where you can hide from the exuberant celebrants for which the city is famous. On the hill you will find Queens Park with a pond and a large playground.

The Royal Pavilion is undoubtedly a monument that many tourists come here for. This originally the seat of King George IV. it stands here as a revelation in a tropical garden.

The entire residence is located in the heart of the city, set in a landscaped tropical garden with a park. If you are lucky, various festivals are often held here. The towers of the pavilion attract attention from a distance. Their character is more oriental than typically British. 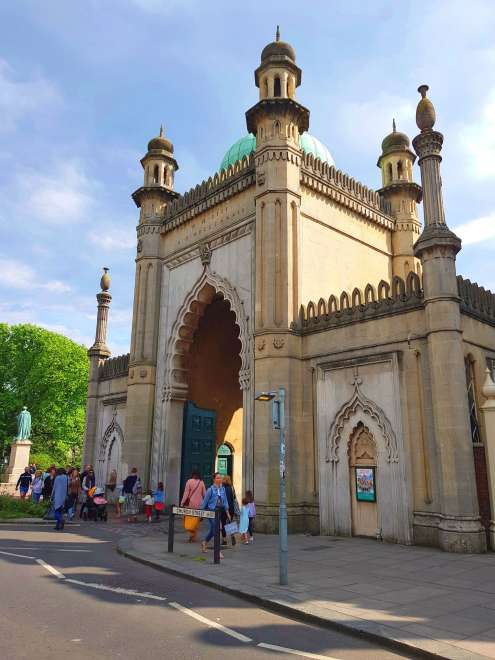 Gate to the park

The gateway to the park itself, where you will find the Royal Pavilion, suggests that it will not be an ordinary English park. The gate, as if cut from the oriental world of a Thousand and One Nights, separates the normal daily bustle of the city from the peaceful garden greenery.

In the center not far from the beach or the Pavilion you will find cute twisted narrow streets full of pubs and restaurants. It's really a feast for the eyes, because what a house it's some interesting. In addition, during the May holidays, the whole city is crossed by flags stretched over the heads of visitors.

On the way from the Pavilion to the sea to the south, you can't miss the park with a large central fountain, or if you want a fountain. During our visit, a large cultural festival took place in the background. 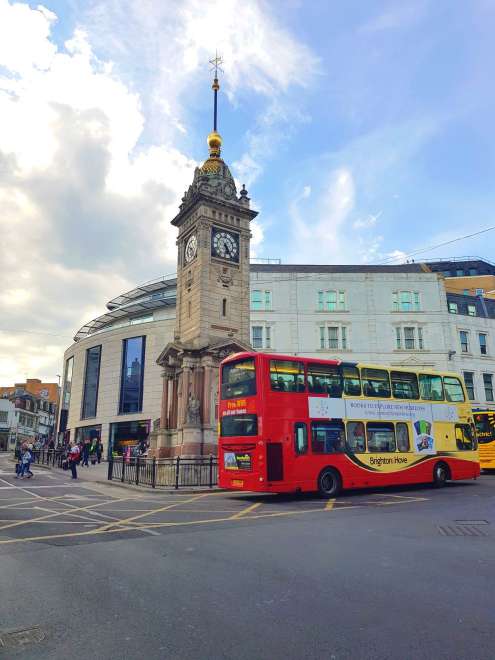 Even on the way back to the station along the main busy street there is something to see. Here, for example, the Jubilee Clock Tower, this memorial to several British monarchs but especially Queen Victoria, has stood here since 1888.

A trip to the cliffs of Seven Sisters