Ascent to Dedu and freeride in Georgia

We decided to spend this spring holiday in Gudauri, probably the largest ski resort in Georgia. A trip for three generations, secured skiing on the slopes and available freeride. A ski paradise, especially when it attacks. We had no idea, but we found the powder and enjoyed it. Three trips in the form of hikes and subsequent descents through open terrain. One of them on „Grandpa“, ie on Grandpa Ena (3,488 m). February 2019.

View of Gudauri from the slopes

View of Gudauri in the morning before the cable cars are released. The piste is perfectly groomed, don't expect other services so good. We chose Georgia as a destination for family skiing after many years of skiing in the Alps, we wanted to know something new, also for its cultural enrichment. All you need for a trip to Gudauri is to arrange air tickets, subsequent transport from the airport to the place and of course accommodation. You are priced mainly according to the tickets. Accommodation, ski passes and food are cheaper in Georgia. The ski pass will cost CZK 2,340 for six days.

Due to the time lag of getting up, we don't make any sense, we leave at eight, in the Czech Republic it's five o'clock in the morning. We walk up the slope, the temperature is around minus ten degrees, stronger wind (twenty knots), clear. At a height of 2,700, we wear goratex jackets and hoods under the eyes. When we hide behind the mountain as we climb it from the right, the wind stops completely. We are up at the exact moment when even the first skiers arrive by cable car. We dodge the ski slope, take off our belts and traverse over the northern snow wall, below us one avalanche, ie an avalanche trough, which we decided to resist. We prefer to go down another gutter, in which we see traces. The space changes into a wide plain. If there was fresh powder, we would be in paradise. We have deep snow, but blown snow, but we are still quite satisfied. Two gondola lifts lead to Kobi, respectively from Kobi, a matter of the last two years. We descend to the first one, because we are not sure if the lower cable car was let off due to the wind.

Of course, the hill looks „flat“, as it is in the photos. In total, it is necessary to ascend 1,100 meters from Gudauri. If you accidentally drop the lid from the thermos, you will throw in about another hundred.

The photo shows the ascent from the cable car and the western panorama, including the Kazbek mountain – on the far right. We also came from the right – from below.

Sadzele, view to the east

Panorama from the other side, which completes the overall view. It shows the piste on the right and also the way to the freeride, ie between the people and the first round snow peak.

On the ski slope you can have shashlik, all kinds of baked buns, or classic western fast food. The background is primitive, often missing a toilet, or you can find it in a wooden booth nearby. At the lower stations of the cable car in Gudauri, the restaurants are more equipped and under the roof, in most of them you will get not only traditional Georgian dishes such as the already mentioned shashlik, pelmeni or kebab, but also pizza, salads and various grilled meats.

Deda Ena is a rocky peak northwest of Gudauri. If you want to go there, you need to get a ride in the form of local taxi drivers or simply stop by someone who is driving down the road. The only road here is from Tbilisi and can be full of congested trucks. It is about 15 km from Gudauri to climb the snow plain, which is not so much, but it is basically impossible to walk there. Grandpa in Georgian means mother, which is somewhat surprising. You can't go up with the skis, you descend from the saddle below the rocky peak, from a height of about 3,050 m. If you want to climb all the way up, it will be better to take climbing equipment. We had a drone instead, so we had a lot of fun. There was real powder downstairs, what was left of them after two weeks. But we enjoyed it a lot, also a ride „hitchhiking“ back and forth. We managed to negotiate it for 30 lari, which is certainly not a real price (multiple of nine crowns), but we still felt excited, because the original proposal was 90 lari. Video from the drone: https://drive.google.com/…2yAU-2Z/view?… 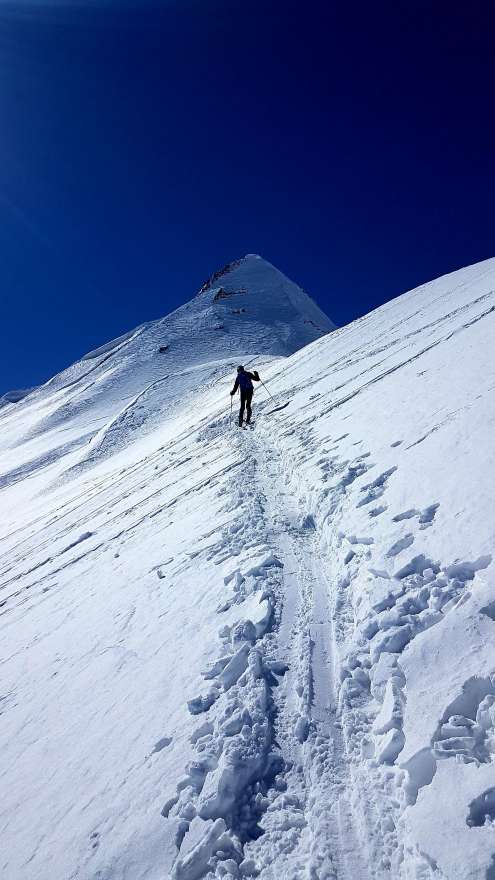 Ascent to the saddle

The top of the mountain is on the right and is not visible in the photo, there are still 400 meters of altitude left from this place. From here you descend from the saddle, it's up to an amazing 700 m to the road. There are no cracks, it's not a glacier, so the ride can be really enjoyed, of course considering the risk of an avalanche and the ability to read the terrain.

Our curves on the right with a view of the top of Deda Ena. We had to break through the snow a bit in places, because there was a crust on it. Cloudless sky, temperature around zero.

View of Deda Ena from Gudauri

Picture from the apartment balcony. Grandpa Ena is the highest peak in the cloud.

Getting out of the car - trip three

The road from Almasiani, which winds into the adjacent villages in the northwest, is not very passable. After we fit into a wheel-sized hole, we roll out, the driver still offers to come back for us. We say goodbye and take the number on it. We plan to ascend about 600 meters to the plateau and descend back to the road. The trip was invented by Old, to whom we thank for the previous tip in the form of Dedy Ena.

The sun is washing our heads

We have the first few hundred meters at our feet and the sun is washing our heads. In the distance you can see the bottom of the cable car leading from Kobi. We take off our T-shirts, but it doesn't help much. The quality of the snow is not worth much, we make distances so that we do not „break it“, under these conditions it would be a board avalanche, which is an avalanche you want to get to the least of all, because we will break you.

From here we will descend, the tip at the very front is the top of Ded En, looking at it from the opposite side than two days ago.

The holiday week is over. The descent to Kobi was not bad at all in the end. It can handle the crust at any time. We also managed to get up the cable car and arrived in Gudauri on the piste. We are sitting at the airport in Istanbul, on our transfer to the Czech Republic. Grandma snowboarder has a broken arm, but she looks like nothing. (The hand is waiting for the final treatment to Bohemia, in Gudauri they only fixed it.) The youngest generation pairs Call of Duty 4 – on three notebooks together, where they broke up the net. The rest of the staff enjoy the found book by Karel Čapek in Turkish – pocket stories identified, specifically the Poet.

Travelogue Green mountains in the Caucasus

Ushguli - the pearl of Georgia

A trip to the monastery of David Gareja