For Christmas in Siberia

When a meter of snow falls on us, it is a calamity, when it attacks in Sheregeshi, there is a freeride paradise. Taxi rides six hundred, no one breaks down, although you can't see a step, a three-legged dog welcomes you in front of the cottage and you are wearing two to three jackets, two gloves and you are still cold. So this year we spent Christmas with our family. December 2019.

Powder in Siberia is different, dry, light, does not change state, just spills, does not make avalanches. It's different – the inland climate and the fact that the temperature in winter does not rise above zero. The frost is real here, –30 ° C is no exception. We were lucky, mostly it only froze down to –20 ° C and we had snow in our waists. The photo shows our children, four boys aged 9, 12, 13 and 16 years. We knew in advance that Aeroflot would not transport us avalanche backpacks and we solved a lot. We didn't like the idea of leaving them at home at all. But we got useful info that backpacks are not needed, that it is actually desirable for a person to ride without them, and he was so lighter and in principle we can confirm this, this snow really does not seem to form avalanches. We drove shovels, probes and beeps, but I think we were the only ones, the shovel was suitable for digging skis. The Russians carry another thing with them – a polystyrene seat under the buttocks, which they attach to the back with an elastic band and use on the cable car. The cable cars are usually old, slow and without cover, which is the main reason why one freezes while skiing. In total, disposable heating pads for shoes and gloves have proved their worth.

They ride in the woods

You drive a lot in the forest, you hop among the trees, the powder lasts a long time in the forest. If it is not snowing, they are sloping down the slopes and there you can enjoy the ride, because there are no frozen plates.

Altitude as in the Giant Mountains

You are not here at any great altitude, you can ski up to the height of Sněžka, but the climate is simply different and it is known in all respects. The photo shows the children again, this is what the forest looks like before the expected snowfall.

On Christmas Day to the cross

On the third day of our skiing we took a trip to the cross Kurgan (1559 m), which can be seen from below. It was the last day before the reported big snowfall, so we wanted to use it. The children were pretty poisoned because they wanted to go in the woods, but their grandmothers and grandfathers didn't want to go to the woods. We were back for lunch, so there was no major damage. No one usually has belts here, so they looked at us a bit, but not so much. You can also get to the cross on a scooter, it costs about 800 rubles for one (approx. 250 CZK), it will catch you at the top of the cable car, both on Zelená hora and on the other side below the top of Mustag.

The next day, everyone rode in the powder. The piste turned into a powder sea and the snow was constantly pouring for two days. https://youtu.be/_QJcLZ_R_m4

Sheregesh from the slopes and details of the flight

View of Sheregesh from the sloping slope the first day. The town is located in the Kemerovo region of Russia, it is a region of gulags and exiles, 200 km from the city Novokuznetsk. A typical smoky chimney is typical for the city skyline, which can be seen in the shot in the middle. The time difference from Prague is six hours. It is most often flown from Prague via Moscow. Our flight became a bit more complicated, we were forced to make an emergency stopover in Kemerovo due to the weather and wait on the runway for better visibility. From Novokuznetsk to Sheregeshe it is necessary to arrange transport by car, ideally in advance. 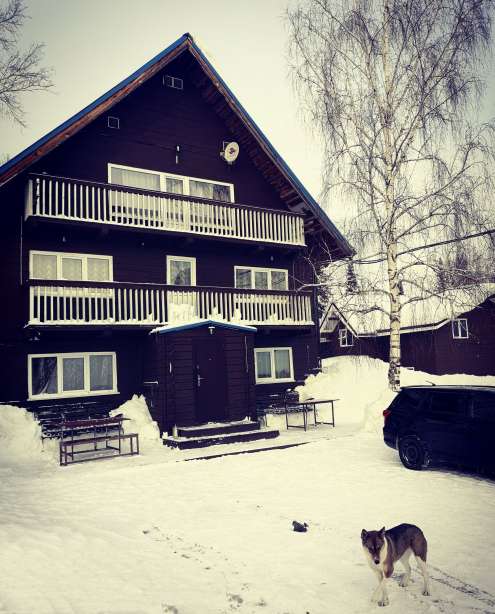 Our housing in Vesennyaya ulitsa

Perfect cottage for 12 people with four bedrooms and a shared kitchen. It included three hafani (Siberian huskies). They were on long chains by nice pens and always barked happily when we returned from skiing. One dog in particular was willing to scratch himself, he had a paralyzed front paw, he was the only one who was not on the chain. Why don't they bring him too? It shook our heads. That he wouldn't be theirs, or that they wouldn't care …? When he first accompanied us to the store, we froze so that something would not pass him on the main street, but he was obviously moving better on it than we were.

Shereghes is basically one main street that provides all the traffic and one bigger street that forms something like the center where most of the shops are located. The shops are surprisingly open from eight in the morning to ten in the evening, on weekdays and over the weekends. You can buy almost everything there, the assortment is entirely western. Get ready for smog from the chimneys, we couldn't sleep at night because of that. The city of Shereghes has a population of just over ten thousand and was originally established for mining. Gulags are not a thing of the past, we have been walking around one such fully functional prison. But if you start googling, you will find that Sheregesh is currently known mainly for the Grelka fest or The Annual Bikini Ski Day In Siberia, an event held every April in which Russian beauties go snowboarding and skiing. The temperatures are already favorable at that time, and the videos will flood flood youtube and social networks.

To complete the atmosphere of the city, I am adding a picture of the original houses. Although you feel that you are on the edge of the world, progress has come here a long time ago. Restaurants and accommodation have wifi, you can best talk to a taxi driver via whatsapp, but you will probably need to use a translator to send the message correctly in Cyrillic. There is a lot of confidence in taxi drivers, they always rode accurately and willingly helped with loading skis. There is not much other way of transport to the piste, it is really not possible to walk along the main traffic class, although of course we tried it.

The top of the Green Mountain

A moment at the end. The photo is from a alpine hike, when we went from the top of Zelená hora (1270 m) to Kurgan (1559 m) and further towards Mustag (1560), from where we descended. Our Christmas week in Siberia is over. On the way back, when a taxi took us to Novokuznetsk at night to catch an early morning flight, the outside temperature was –34 ° C. Apparently we really hardened, the children ran out in sweatshirts now in December and refuse to take their jackets.

Author: Markéta Fibigerová © gigaplaces.com
Applaud the author of the article!
Share it on:

Wandering through the wilderness of the Russian Altai

Wandering through the wilderness of the Russian Altai part two

Ascent to mountain and pass Kupol