A southern Israeli city on the Red Sea

Eilat is located in the south of the state of Israel, at the very head of the Gulf of Aqaba in the Black Sea. The destination attracts mainly in the winter months, when you can pleasantly warm up here at temperatures around 21C and swim in the warm sea (23C), where you can snorkel and discover the rich underwater life. Just outside the city are mountains, which you can go explore and comfortably navigate using tourist signs. This area belongs to the Negev Desert, which will give the place an atmosphere as if you had landed on Mars.

Arrivals are from March 2019 directed to Ramon Airport, which is only 15km from the city of Eilat. From the airport you can comfortably get to the city by bus No. 30 to the bus station or No. 50 to the hotel part of town by the sea. A one-way ticket costs 4.2 shekels and can be purchased at a vending machine at the airport with a card. It is said that the money to exchange is paid off only in the city, where they have a better exchange rate and ATMs do not have such high fees.

Checks on arrival and departure to Israel

Another advantage of the new Ramon airport over the old military Ovda is, in addition to its proximity, the rapid reduction in inspection time. Upon arrival and departure, yours will be asked several security questions at the airport, such as: what is the relationship between you and what you are traveling, how long will you stay, if you have ever been to Israel and so on. The same will happen during departure. If you do not speak English and Hebrew, then they have these questions ready in all languages and then you just choose from the obvious options. This was also the only airport where the departure control allowed the transfer of liquids (still 1.5L of water), yoghurts, milk, etc. We did not take anything out of the backpack on the X-ray belt (or laptop, or cosmetics, water, nothing). I see this as a big progress compared to the former airport, where the inspections were said to be up to 3 o'clock and several times they asked you the same personal questions and scanned the individual pieces of food separately. Israel's concern about security is understandable given their history, and count on an X-ray frame and control when entering shopping malls.

The city lies on the shores of the Red Sea and it is also a major attraction for most visitors. The sea is beautifully clean, warm even in winter, as well as the climate in this time of year. At the same time it is rich in underwater life. People come here to dive or snorkel and watch corals.

You don't have to leave the city to swim. Right in the city are beautiful city beaches next to each other. You can rent a sun lounger here or just spread a towel on the pleasant pebble beach. Shelter from the bright sun can be found under the large, permanently fixed parasols that are available on the beaches or in the shade of palm trees. At the same time, there are clean public toilets, which are mostly free, and you can also catch city wifi on the beaches near the promenade.

Camp on the beach at the border with Jordan

In Eilat, as in any seaside town, you will also find several marinas with moored yachts. Marinas and canals cut into the mainland and flow around luxury hotels. The promenade crosses these waterways by means of opening bridges. 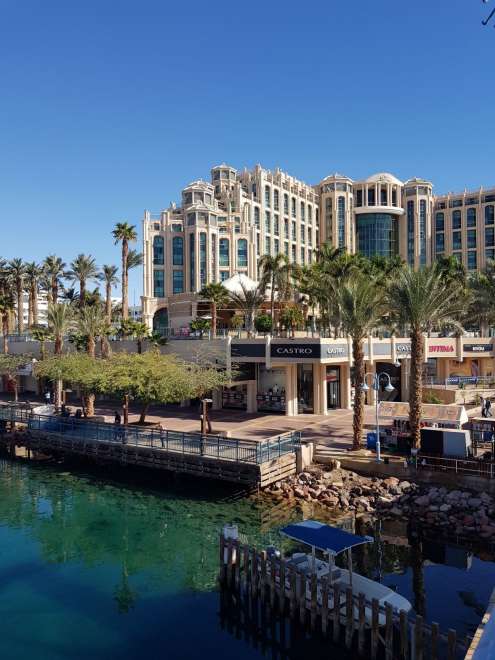 Hotels like from a fairy tale a thousand and one nights

The city is divided between the tourist part, where there are huge luxury hotels, boutiques and everything is shiny, and the part for the locals, which is already less ostentatious. It is generally not very cheap in Israel, so expect to pay enough for accommodation, even if it is not in a luxury hotel with a swimming pool. Airbnb services are here, but they are even more expensive than booking.

Nightlife in the city

The city lives even after dark. An illuminated promenade along the shops will take you through the city and you will also find fairground attractions or vendors at stalls with a variety of sweets. The city is also home to several karaoke bars, discos and modern escape rooms.

If you have had enough of rolling by the sea, you can go for a walk in the mountains, but preferably only in the winter months and with plenty of water. Just behind the town, rocky hills begin to rise, which lie in the Negev Desert. It is one of the driest and most inhospitable uses of Israel, but also protected and with interesting animals to see. 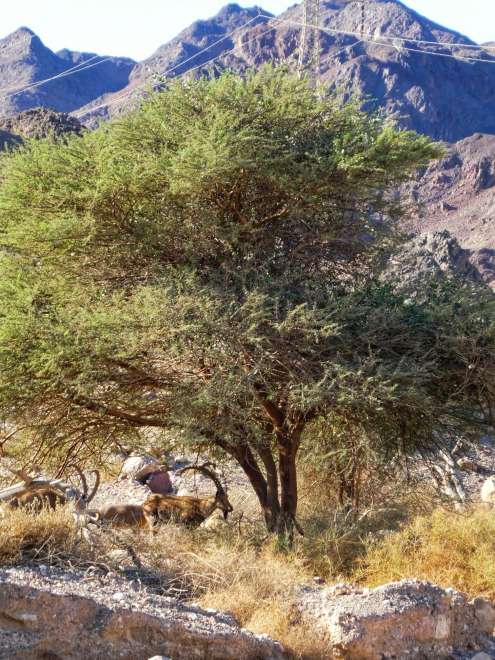 Ibex in the Negev desert

Ibex is one of the rare animals that has adapted to the desert climate. This fearless herd, even with small additions, grazed undisturbed a short distance from the dirt road we took on our ascent to the mountains. They didn't mind the camp, which was a stone's throw from them. 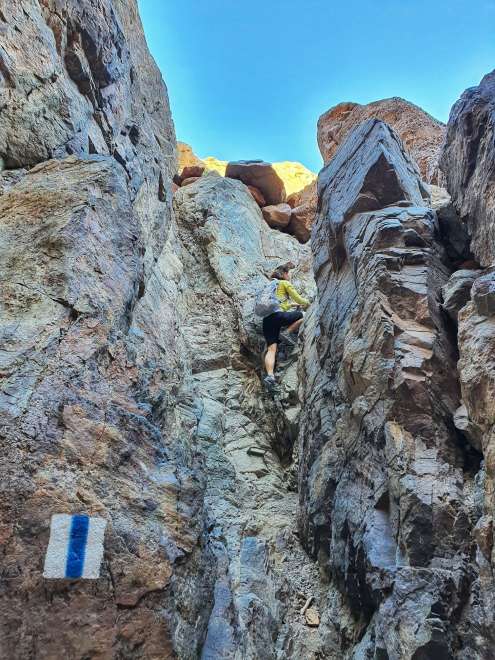 Metal stupas in the rock and tourist signs

The road first led with a slight ascent or sometimes even along a plain dusty road. We even walked a bit along the path used by travelers to show tourists a piece of the desert on buses, because we missed several buses. On the way, however, the path began to climb steeply, leading in places along the rock, where metal stupas for ascent were hammered.

The effort associated with climbing is definitely worth it. We find ourselves in a landscape of all-colored rocks, some of which shine until red, reminiscent of landings on Mars.

Through the rock gaps upwards

The culmination of our efforts was Mt. Shlomo at an altitude of 705m.nm and there was nothing left but to climb the way up. The advantage of trekking in the mountains of Israel are well-marked trails with tourist signs, almost exactly the same as ours.

Mt. Shlomo view from the top

Mt Shlomo is the highest in the wider area and thus provides a beautiful 360 ° view all around. The city of Eilat and the sea bay stretch out in the palm of your hand. Surrounding hills in all possible colors from black to red. Because the borders of Jordan and Egypt are not too far away, you can see the two surrounding states.

Eilat as in the palm of your hand

The city of Eilat from the top of Mt Shlomo.

We went this route directly from our accommodation in Eilat perpendicular to the north over the top of Mt. Shlomo and down to the west. But most locals walk the other way around, which came to us as a much longer descent, which is always more unpleasant, especially on slippery rocks, where you are not sure about anything. The whole trip was for us for about 4 hours of hiking and 13 km. After the descent and connection to the road, it was possible to catch a bus that runs about once an hour. But he passed us in front of the nose, because he had a stop about 500 meters. So we caught a trail back to the city and went to enjoy a well-deserved swimming and rolling on the beach.

Walk around the town of Wadi Rum

Trip to the desert of Wadi Rum

Walk to the village of Wadi Rum

In the very south of Jordan you will find the city of Aqaba – Jordan's holiday center. From Aqaba you can go on a trip to Tala… continue reading