Ascent of the Giant Mine

The most classic ascent path to Sněžka

Petr Liška
Wrote 2140 articles and follows him / her 184 travelers
(5 rating)
Hiking Mountains
© gigaplaces.com
They been there:
+12
They want there:

The Obří dol ascent is considered to be the most classic ascent route to Sněžka from the Czech side. From the cable car station in Pec poc Sněžkou, count on about two and a half hours and six hundred meters of altitude before ascending along Úpa to Obří sedlo directly below Sněžka.

The lower station of the cable car to Sněžka

This tour through the Giant's Mine begins at the lower station of the cable car to Sněžka. There is also a road signpost. We will go slowly up the blue along the river Upa.

A comfortable path along the Upa

The ascent through Obří dol to Obří sedlo is relatively challenging, but this only applies to the second part of this hike. Even less able individuals or families with prams can go to the first one. The road along Úpa rises only slightly and is almost two cars wide.

A small pond in Úpa

At the edge of the forest you will find a nice statue of St. Virgin Mary. At this place, pilgrims always prayed before heading to the interior of the Giant Mountains

A picturesque part of the Giant's Mine

After you leave the forest, a very pleasant passage awaits you, almost along the plain between the meadows and the Krkonoše cottages. Studniční hora rises on the horizon

Hut in Giant's Mine

Probably the most typical building in Obří dole is the cottage of the same name. Sheep and goats graze in the area, making it an experience for small children.

Not all cottages on this route are in the best condition, but it does not detract from their romance.

Behind the shed under Sněžka

After a two-kilometer walk from the cable car, the end of the comfortable part of the Giant's Mine ascent is slowly approaching. You will also pass the hut under Sněžka, the last opportunity to refresh yourself for a longer period of time. It is usually very busy here, because families usually turn around and return to Pec

Chapel in the Giant's Causeway

The final end for hikers is at the chapel in Obří dole. There is a small seating area and a nice view of the river Upa. From here, a more demanding part of the hike awaits you – the ascent to the Giant Saddle. In front of you is Sněžka, which has no characteristic appearance from here. The journey continues from here along the bottom of the Giant's Mine, but unfortunately there is a ban on entry.

There is also a nice view of the Úpa river from the chapel. Here you feel as if you are somewhere in the north of Europe in the tundra

A short distance behind the chapel you will come across a well. Here, the water is usually replenished by those from the opposite direction. Then the endless climb begins. Almost five hundred meters await you in the Giant Saddle. You will enjoy the quite monumental Studniční mountain through the windows in the forest practically all the way. 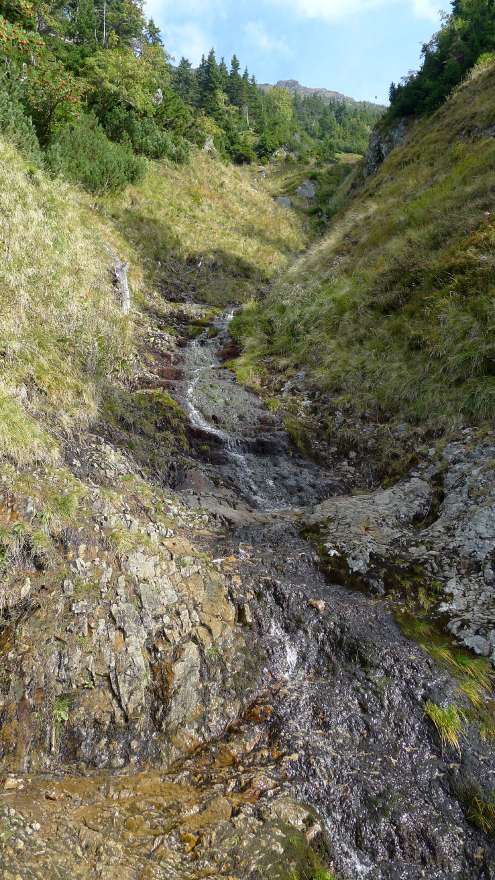 Another unclear place where tourists can stand is the footbridge over the Rudný stream. However, the waterfalls marked on the map are more pronounced only in spring or after heavy rains. There is also a small historic waterworks.

View of the Giant's Mine

From the waterfalls of Rudný potok there is also a pretty good view of Obří dol, from where you have been climbing for quite a long time. However, you have to be here early for the photo shoot early in the morning or you have it in quite strong backlight.

Just a short distance from the footbridge over Rudný stream you can see the whole small valley. You can also see the jagged top of Sněžka and the columns from the cable car.

Views from the Giant Saddle

You are finally in the Giant Saddle. Count on the fact that it is one of the busiest places in the Giant Mountains ever – also basically meet roads from 7 directions. So relax here for a while, enjoy the panorama of Studniční hora and hurray for Sněžka

Luční hora , Czech Republic , Poland
Applaud the author of the article!
Share it on:

How much does the highest place in the Czech Republic measure?

Giga List: The most beautiful tours of the Giant Mountains

The Krkonoše Mountains are the highest Czech mountains and not only because of that, they offer great conditions for hiking. In… continue reading