Short, but very nice walk over Modre sedlo (“The Blue pass”) (1 510 m asl), which is between the second and third highest mountain of the Republic, is rich in views of the southeast of Giant Mountains, practically the whole Podkrkonosi (“Foothills of Giant Mountains”) and Upske raseliniste (“Upa peat bog”). In winter there is a brisk traffic of skiers and in the summer it is full of cyclists, for whom is Modre sedlo one of the biggest challenges in the country. Tourists come here in large numbers at any time of the year. The distance between Vyrovka and Lucni Bouda is only 2.5 km. Ascent 150 meters, descent 90 meters

There is relatively wide asphalt path between Vyrovka and Lucni bouda “(Meadow hut”). In winter it is trodden by snow cats, so it is passable virtually throughout the year. The path rises gradually in the slopes of Lucni hora (“The Meadow Mountain”).

Looking back you will see on the horizon the hut “Na Rozcesti” (“At the crossroads”), in the vicinity of which there are really a lot of hiking trails. In the foreground is hut Vyrovka, from which you have just set out. The passing skiers are the only local danger in the winter and even they mostly have death in their eyes. 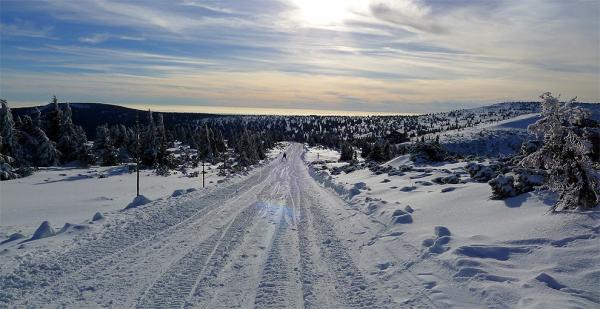 From the path leading to Modre sedlo there is a fabulous view of the elongated ridges and rounded hills of southwest Giant Mountains.

The snow cats cruising here quite often from Lucni bouda work both as a supply and as a taxi. The highest point of this route is just a short walk before you. Pole signs can come in very handy during the periods with more snow or during worse weather. 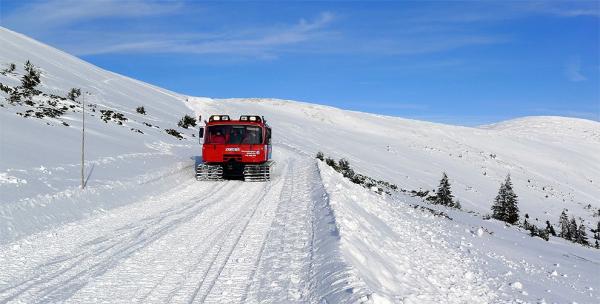 If winter inversion is low, you can clearly see also the familiar outlook hills in Podkrkonosi – Zvicina, Kumburk or remote Velis.

Memorial to the victims of the mountains

After half an hour of comfortable walk from Vyrovka you will finally ascend to Modre sedlo (1 510 m asl) – the highest point in the Czech Republic, where you can legally ride a bike. There is a memorial to the victims of the mountains. There are plenty of them even though the Giant Mountains are small and low mountains. It is the first time when Snezka (1 602 m asl) peeks out and the featureless flat mountain next to it is Studnicni mountain (1 554 m asl).

Another indistinctive mountain on this side is also Lucni hora. Interesting are the remnants of pre-war fortification.

The destination is just a short walk before and under you. Lucni bouda is one of the busiest places in the Czech part of the Giant Mountains, so it happens only rarely to be in its vicinity alone.

During the descent is clearly visible the main ridge of the Giant Mountains – Slezsky hrbet (“The Silesian ridge”), along which leads the state border and hiking trail known as The path of friendship. The ridge is dominated by Vysoke Kolo (1 509 m asl ), the highest mountain in the western Giant Mountains.

Before you reach Lucni bouda, you will definitely enjoy views of the highest mountain in the Czech Republic – Snezka.

Visit of ruins of Kumburk castle