Entry into the Sasso Lungo massif

Petr Liška
Wrote 2217 articles and follows him / her 204 travelers
(1 rating)
Hiking One day Hikes
© gigaplaces.com
Suitable for:
Hikers
They been there:

If you feel like going around the entire Sasso Lungo massif, the starting point is in the beautiful Sella pass. From here, a long ascent awaits you at Toni Demetz, located in the saddle of Forcella Sassolungo, a place that divides the massif into two distinctive parts. Once the cable car leads here, you can possibly save the whole tour

The hike begins just below the Passo Sella pass (2,240 m above sea level), where there is also a large car park. Directly in front of you will be the beautiful Sasso Lungo massif, where we will go.

View back to Passo Selle

After a few minutes of climbing, you have a nice view back to the starting point of the route at the mountain hotel. Passo Sella itself is a bit further and higher

The road is still rising and the huge walls of this dolomitic giant rise in front of you. There are small rocks around the road and an occasional loner tree 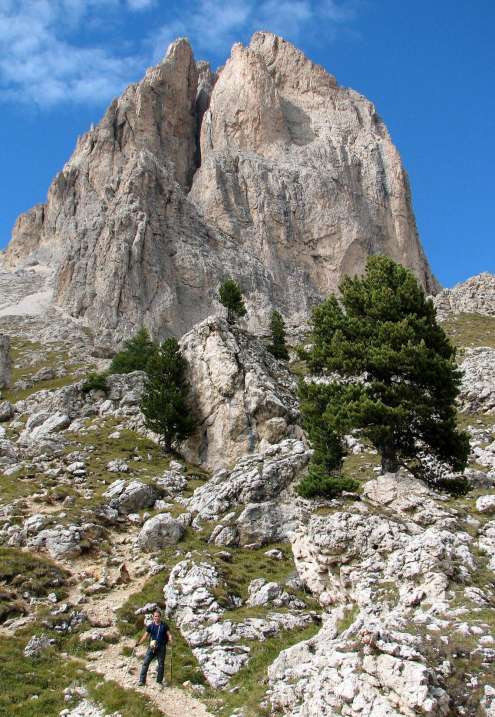 Sasso Lungo (3,181 m above sea level) is rightly considered one of the most beautiful peaks in the Dolomites

At the ascent there is also a beautiful view of Marmolada, the highest mountain of the Dolomites and the only local peak with a glacier

The Sella massif itself, on the other hand, is not so rugged – it looks more like a gigantic fortress

Road by the cable car

The path leads quite close to the cable car, so you may sometimes think that you could rather let yourself be ridden than blow the final rubble trough

Finally, we are at the end of the first stage of the tour around the Sasso Lungo massif – Toni Demetz (2,685 m above sea level). It is also the highest point of this journey.