Tour of the fortress of La Mola

Or one of the most beautiful fortresses in Europe

The fortress of La Mola, named after Queen Isabella II, is located in the east of Menorca. The Spanish built it here between 1848 and 1852, after the demolition of Fort San Felipe. However, before it was completed, it unfortunately became obsolete. It was originally intended to protect the approach to Mahon Harbor to prevent British and French ships from supplying. It served as a military prison during the Franco dictatorship, is still used by the Spanish Navy and is open to tourists.

Arrival at the fortress

After the demolition of Fort San Felipe, the island was without any protection. For that reason, the Spanish proceeded to build a new fort on the opposite shore of the bay at the port of Mahon.

Even before we pass through the gate into the interior of the fortress, we are faced on all sides by massive walls studded with loopholes. We haven't even entered the fortress yet and we are already amazed by its size.

Entrance to the fortress

After purchasing the entrance fee, it is possible to walk through the fortress independently according to the plan with individual points. The route can be shortened to about 1.5 hours, or you can extend it and actually go through the entire fortress. A longer route will take 3 or more hours. In the heat here, a tour of the entire fortress is very difficult and you need to have plenty of water. However, there are vending machines with drinks and toilets scattered around the area, so it can be managed even without large supplies. First, the sightseeing circuit takes us to the side walkway.

A side walk surrounds a smaller courtyard. The fortress is named after Queen Isabel II, who visited the fortress here. The fort here was in operation even before its complete completion.

Historic cannons and batteries from the Civil War are located in the corridor.

The fortress is located on a rocky outcrop, so it offers a perfect view of the surrounding area.

In addition to the underground areas, you can of course also reach the castle grounds, from which you can see not only the fortress itself, but also the mouth of the Mahon harbor.

The fortress is divided into several parts. You can read something about each of them on the information boards in several languages.

Even such a large fortress cooperated with smaller fortresses in the vicinity. From the walls you can also see the so-called Lazareto on the island in the bay of the Mahon port. It was really an infirmary where people arriving in Europe were kept and quarantined for 40 days until it was proven that they were not infected with any disease. It was precisely the Lazareto that was built from material from the dismantled San Felipe fortress.

Entrance to the ditch

The massiveness of the buildings here is impressive. There are shooting holes on every building here in all directions. 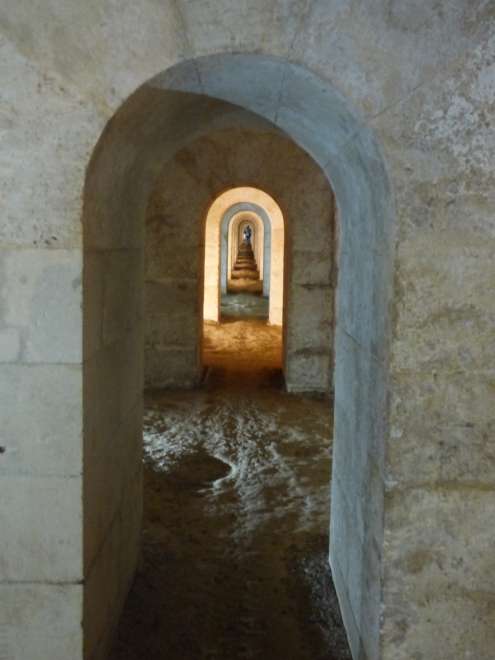 We enter the underground again, into the corridor for shooting with rifles. The corridors here seem quite endless.

When we reach the surface again, we can admire the way the fortress was built into the slope and the fortifications in several rows.

The fort has been abandoned for a long time and some parts have already been significantly affected by the ravages of time.

The huge barracks are the dominant feature of the area. Since they are empty and rapidly decaying, they now have a ghostly feel to them.

In more recent history, one of the barracks served as a prison for political prisoners. The fortress of La Mola thus witnessed sad events.

The sightseeing circuit leads past a small ammunition depot.

A relic of the Spanish Civil War at La Mola Fort is then two Vickers cannons. During the civil war, the local cannons fired only twice, thereby repelling the attack on Menorca.

Although the Vickers cannon is located in the most remote part of the fortress, it is definitely worth seeing, if only for its respectable size. The cannons are still functional.

On the way back, we take a direct route back to the entrance past unspecified dilapidated buildings that probably served as a background. Touring the La Mola fortress is more challenging, but definitely worth it. Even local history buffs speak of it as the island's historical pride, and they are right.

Tour of the mansion in Talatí de Dalt

A walk through the town of Binibequer

Discovering the beauty of the surroundings of Es Grau