Itinerary for a trip to Corfu

Dominika Charvátová
Wrote 120 articles and follows him / her 11 travelers
(1 rating)
Traveler Itineraries Beaches and Swimming
© gigaplaces.com
Suitable for:
Beach loungers
Families with children
Families with a stroller
Seniors
Holidaymakers
They been there:
They want there:

On a 3 – day trip around the island of Corfu, we managed to drive from the capital Keryka, where we flew, through its eastern and to the northern coast. Corfu is the second largest Greek island in the Ionian Sea. You will find countless beautiful pebble and sandy beaches with warm sea, winding streets of the old town of Kerkyra and port towns with ubiquitous taverns. Due to its location and climate, it is an ideal destination for summer as well as off-season destinations.

Arrival and journey along the east coast

We arrived at noon, so we had half a day to explore the local beauties. After arriving in Kerkyra, we rented a booked car at the airport and headed for the beach along the east coast.

After about 20 minutes of travel along the east coast, we stopped at Barbati beach, where we finally tested the transparency and water temperature. The pebble beach provided us with a pleasant background for acclimatization and waiting for a hot afternoon.

View of the bell tower

Later in the afternoon we set out to move to the town of Kassiopi on the edge of the north coast. The road to Corfu is formed by narrow paths that often climb high into the hilly terrain of the center of the island. We were fascinated by the view of the scent with a view of the canal and the mainland of Albania, which would be a stone's throw away.

The port town on the north coast – Kassiopi – with its picturesqueness and tranquility breathes on everyone. We enjoyed his tour with the sunset, which colored everything in pastel colors.

The city of Kassiopi also boasts a local fortress located on a peninsula, around which you can walk and discover picturesque small beaches. All the more romantic in the setting sun.

The azure sea and pebble horseshoe beaches line the peninsula around Kassiopi town.

We ended our first day in Corfu at Avlaki beach, just a short distance from Kassiopi. The only downside was the number of intrusive mosquitoes lurking from a nearby freshwater lake. We left the bathing the next morning.

Overnight at the lighthouse

Our plan was to camp in Corfu, so as the first place we chose Tzoufaka beach, which lies on the other side of the peninsula across the forest from Avlaki beach. At the very end was a lighthouse that helps navigate large steamers through the strait between Corfu and mainland Albania. We also saw a couple of them passing by at night. The place to lie here for two people was just right.

The next day we continued along the north coast and visited the beaches of Canal d´Amour and Cape Drastis at the very western tip of the north coast. Both areas are characterized by sandstone rocks and formations dug into them by sea waves.

Beautiful sunrise after the bivouac on Vrachli beach.

The sea is so warm at the end of the season in August that even in the morning it is not a problem to go watering right away.

Because this side of the peninsula is not so often visited by people, we were also an attraction for a few sea creatures. One of them was a small stingray, if we identified it correctly.

Just one notch to the coast further from the famous Canal d´Amour beach, we found a place to swim, on Apotripiti Beach. There was shallow water in the bay, so the water temperature was even higher. It was also possible to swim on free-standing pieces of sandstone rocks and climb them.

You can take a walk along the cliffs, which lead over several rocky outcrops. The famous canal d´Amour beach is often full of people and noise, so we chose to rest and swim one of the side beaches.

Swimming and jumping off rocks

Especially young boys have fun jumping from sandstone rocks into clear water. Steep sandstone rock walls are as made. Others use flat surfaces on the rocks for sunbathing. The Canal d´Amour is sought after both for its interesting sandstone rocks and for the legend of lovers, who, when passing together through a rock gate, remain in love with each other forever.

Just a few kilometers next to the canal is another unique sandstone – Cape Drastis. These are steep white cliffs gradually bitten by sea waves. 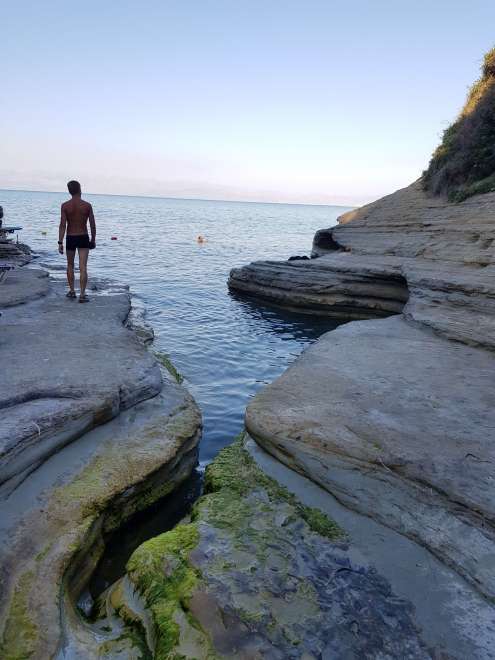 This area is less busy because it is located in a wooded promontory. If you have enough strength, you can go down from the top of the cliffs to the sea level and bathe here. There is only a narrow rocky entrance and supposedly colder water, which came in handy after about 20 minutes of descent in steam.

Just a few kilometers away, where the white cliffs continue, you will find a beach under the cliffs – Loggas beach. There is also a glass viewpoint. Unfortunately, accessible only from the tavern, which was reconstructed. People come here for the sunset, but we have a better place.

We returned to the view of the cliffs of Cape Drastis, where the white rocks turned golden pink with the setting sun. Here, too, a few people came to see the beauty, but up to 10 people.

The setting sun from the viewpoint of Cape Drastis

From where we had the sunset in the palm of our hand and we also looked out for our next bivouac site, on top of the cliffs.

From the north back to Kerkyra

On the last day we had time to cross from the north coast through the mountainous center of the island along small winding roads. The island of Corfu is tiny, so you are from one end to the other in an hour. In the morning, before the sun began to burn the most, we managed to walk through the old town of Kerkyra – see the old and new fortress and be enchanted by the alleys and houses the width of one room in the old town. The last hours before leaving for home, we picked up bronze on the beach. 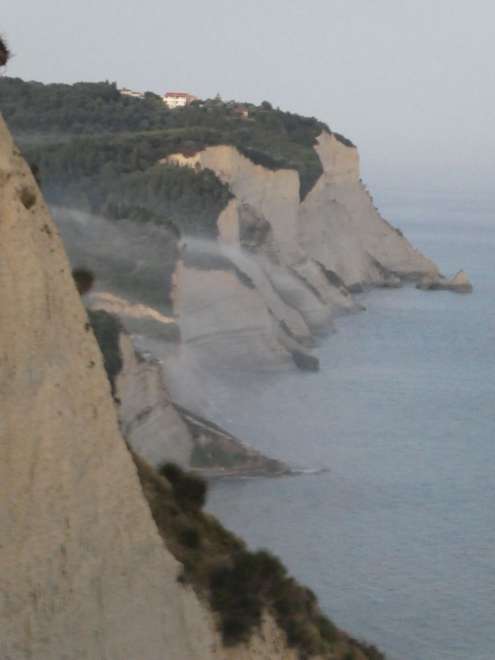 Waking up on the cliffs

In the morning we woke up to a beautiful view of the cliffs of Cape Drastis, along which the mist rolled lazily from the woods above them.

Sunrise over the cliffs

The narrow profile of the cliffs also has the advantage of its orientation to the sides of the world, because both sunset and sunrise can be observed from here. Just turn to the other side.

After crossing from the north, we began our tour of the capital of Corfu, Kerkyra, at the New Venetian Fortress. Admission is free here and because we were here for Greek conditions early on Sunday morning (about 9 am), we had it all to ourselves.

Views from the fortress

The views from the fortress are magnificent. How to get to the port …

View of the city from the new fortress

… as well as the city, where in the distance you can see our next destination, old money.

Kerkyra is the capital not only of Corfu, but also of the Greek region of the Ionian Islands. The old town has been a UNESCO World Heritage Site since 2007.

You don't need a map to intertwine with the alleys of Kerkyra. Wherever you go, you will come across picturesque little streets and colorful houses, or drying clothes on cords that hang over your heads. 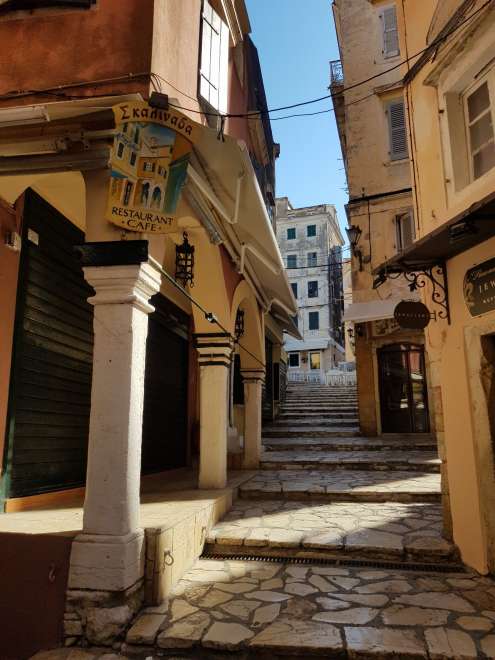 I definitely recommend planning a city tour in the morning or in the morning. The shadow of nearby houses is an advantage, but in the heat it does not save everything. You will find countless taverns and shops with everything from trinkets to handmade uniques.

Museum of Asian Art in Corfu

After weaving through the alleys, you will reach the end of the peninsula on which Kerkyra lies and you will find a larger square where you can not miss the Palace of the Archangels Michael and Saint. It is the largest and most important building of the period of British rule in the Ionian Islands, beginning in 1814 and ending in 1864 with their Union and the rest of Greece. At present, there is a museum of Asian art.

We are approaching the Old Venetian Fortress, which is surrounded by a sea moat, where small boats are parked, probably ready for fishermen to quickly set sail.

Inside the fortress, with an entrance fee of about 6 Euro, you can transfer to the history of Corfu. You will find several exhibitions in the indoor buildings or you can go on a tour of the large exteriors. 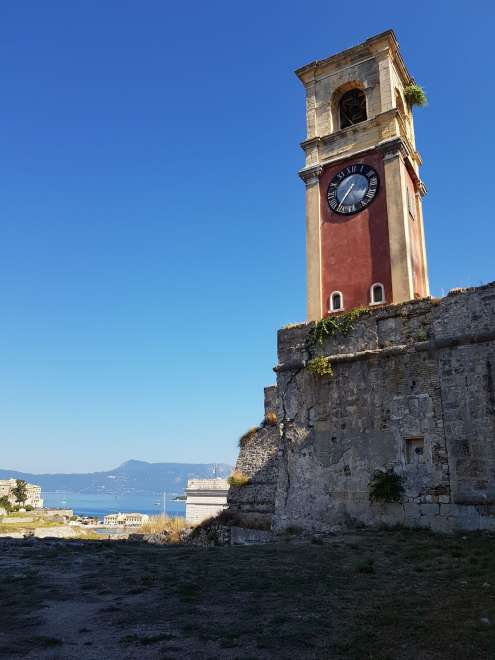 As you climb to the top of the old fortress, you pass a clock tower that still strikes the clock. From here there is a nice view of the city, but don't go ahead and continue, steeply up.

After climbing a few meters up the slippery stone steps and in the 30C heat, you will be glad that it is already the top. You will find far-reaching views and a lighthouse that guides boats to the harbor.

On the plateau next to the lighthouse you will also find the summit cross and a view of the island by the harbor, where there is a regular ferry.

View of the port of Kerkyra

There are also several luxury yachts moored in the harbor, which has a beautiful view from the top of the fortress built from the 15th century region, as well as the rest of the harbor.

We enjoyed the end of our stay in Corfu on the beach near Kerkyra, so that we could have it close to the airport and enjoy the sea and the sun for as long as possible.

Trip to the northwest of Lefkada

A trip to the surroundings of Vasiliki