Through the wild gorge of the predatory river

Martin Javorský
Wrote 195 articles and follows him / her 9 travelers
The most beautiful places
Author: Martin Javorský © gigaplaces.com
Suitable for:
Hikers
They been there:
They want there:

Between Žďár nad Sázavou and Chvaletice, the river Doubrava flows in a northeasterly direction. Between Ďírc nad Doubravau and Chotěboří, the river makes its way through the Iron Mountains and has created a unique canyon in the Czech Republic. The wooded canyon-like valley of the river offers a breathtaking but rather demanding walk along the left bank. The Doubrava Valley is part of the Geopark Železné hory

The geological bedrock is changing near the village of Bílek. The river flows from the chalk deposits into the area of hard orthorolites. The flow of the river cuts into them and breaks through numerous rapids and waterfalls all the way to the village of Sokolovec.

In the most valuable part of the valley, there are stone seas, waterfalls and giant pots. Among other things, crayfish and common wren live here. That is why the „Doubrava Valley“ nature reserve with an area of 92.07 ha has been declared here.

The most interesting part of the valley is a 4.5 km long educational trail following a red tourist sign. Thanks to the information panels, the visitor has the opportunity to get to know the local plants and animals and especially the significant geomorphological and geological phenomena.

The path is difficult in places and even in ideal conditions you need to be careful and supervise the children. In winter, it is possible to admire the frozen river with icefalls, but the terrain is very challenging due to the slippery surface or snow cover.

For the safety of tourists and the railway line, trees attacked by the bark beetle were cut down. Extra care must be taken when passing. The felled wood remains in the canyon to char. It can therefore be expected that a new mixed forest will gradually emerge here.

After a 2 km walk, the trails reach the 4 meter wide gorge „Koryto“. It is clearly the wildest place in the entire canyon. A series of rapids and rock sills culminate here in the 2.5 meter high „Great Waterfall“. In these places, steep rocks rise up to a height of 15 meters around the river. On the right bank is the „Giant Pot“, which was created by the gradual grinding of rock fragments by swirling movements.

Views of the waterfall

From the view of the waterfalls, you can see the considerable drop of the river, which falls by 55 meters on a total length of 1340 meters. The drop on the entire section of the educational trail is 83 meters. 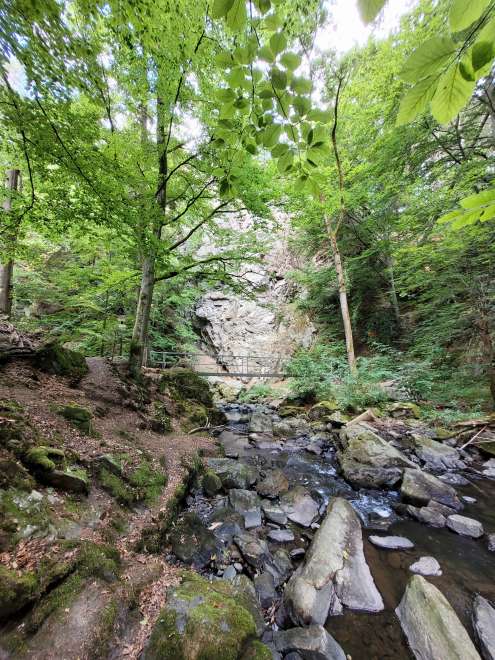 After about 2.5 km, the trails reach a footbridge where it is possible to cross the river and return to the starting point along a comfortable forest path marked with a green sign. However, most tourists take the train from Chotěboř to Bílek and then return on foot for a few hours following the red sign. 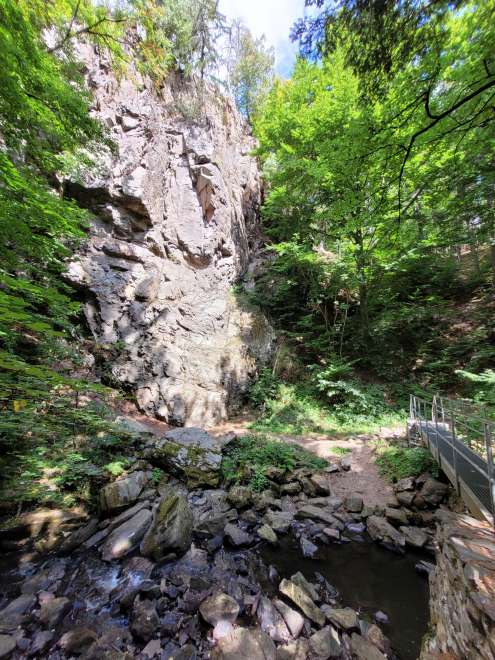 On the right bank of the river, the mighty rock promontory of Sokolohrady rises to a height of 30 meters. There is a lookout at the top at a height of 515 m above sea level, and there are several climbing routes on the walls.

The remains of a former castle from the 15th century can be seen today at the top of the rock. Upon closer inspection, one can find a castle moat, the remains of a pentagonal tower and perimeter walls.

From the castle, you can walk about 100 meters along a challenging rocky path to the rocky viewpoint above the canyon.

Polom forest in the heart of the Iron Mountains