Hike under the highest waterfall in the world

Petr Liška
Wrote 2142 articles and follows him / her 188 travelers
(1 rating)
Hiking Nature
Author: Lukáš Uher © gigaplaces.com
They been there:

After arriving from Canaima and a short rest in the „base camp“, the peak of this two-day trip awaits you – a jungle tour directly below the world's highest waterfall, Salto Angel.

At Base Camp Salto Angel

The starting point of the tour is right next to the picturesque Base Camp. So first he has to take you to the other side by boat

The path to the waterfall will show you the local unspoiled jungle – vines, huge leaves and ubiquitous roots.

Under the largest waterfall in the world

You are finally under it. Tilt your head well so that it fits into your field of vision for a whole kilometer. A beautiful optical illusion, the water seems to flow from the highest point of the mountain.

View of the Table Mountains

From the viewpoint at the waterfall there is also a nice view over the valley and the forest to other table mountains. The game of clouds is really wonderful here.

View of another waterfall below Angel

From the viewpoint you can see another destination of this trip, a smaller waterfall with a beautiful swimming lagoon. Unlike Angel's squirrel, everywhere else it would be a big tourist attraction. 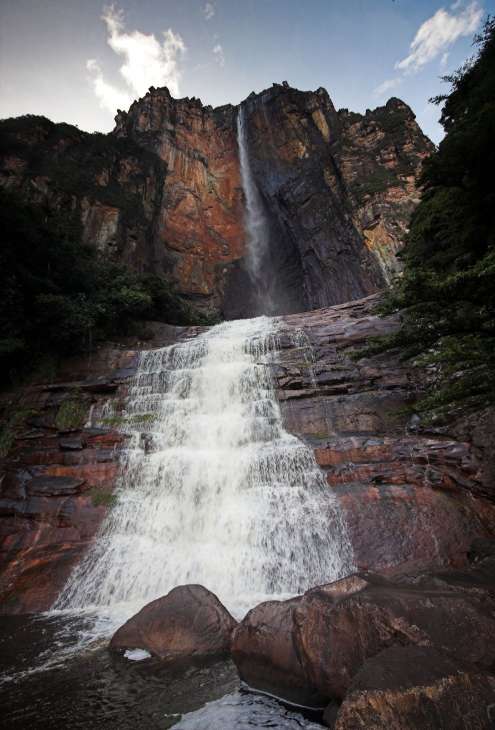 Salto Angel from a smaller waterfall

Dinner in the rainforest

After a walk to the waterfall, you will only have dinner in such a forest style

How to sleep in the rainforest – hammocks with a mosquito net. Who is not used to it will not sleep very well

The sunrise here is absolutely beautiful, I probably don't know about the better

First red then gold, clouds rolling over the jungle

Predators catching the first rays of the sun

A tour of Canaima