Visit one of the most populous cities in the world

Tony Výborný
Wrote 57 articles and follows him / her 7 travelers
(1 rating)
Cities
© gigaplaces.com
They been there:
They want there:

Shanghai is one of the world's largest cities and offers the perfect combination of a modern city full of huge skyscrapers with ancient temples.

The city of ** Shanghai ** is one of the largest cities in the world. It has two and a half times as many inhabitants as the whole of the Czech Republic, and a proper tour would certainly deserve many more days than we had available. We planned to visit Shanghai for only two days, when we used air transfers on the way to New Zealand and back.

Riding the fastest train in the world

The first experience was to ride the fastest train in the world ** Maglev **, leading from the airport ** Pudong ** to the center – unfortunately we did not find out information at first, and therefore the maximum speed was „only“ 300km / h. During the second run, we already knew that the train only reaches its maximum speed at certain times (09: 00–10: 45 and 13: 00–16: 45), so in the end we also enjoyed the ride at 430km / h. The name Maglev is an abbreviation of the words magnetic levitation, which suggests that the train does not run directly on the tracks, but hovers over them using magnetic forces.

The first stop in Shanghai was the modern center of Lujiazui with the subway station of the same name. Right after exiting the subway, we were shocked by the height of the surrounding skyscrapers, many of which offer amazing views. ** Lujiazui Green ** is located among skyscrapers and offers beautiful views, similar to those of ** Central Park ** in New York.

On the other side of Lujiazui Green are three skyscrapers that are among the tallest in China and around the world.

The individual skyscrapers and towers offer beautiful views and it is very difficult to decide which one is the best. Due to time constraints, we could only manage one and we chose the highest one.

** Shanghai Tower ** is a fantastic skyscraper. Not only is it the second tallest building in the world, but it also has the fastest elevator ever, reaching a speed of almost 74 km / h. The elevator is so masterfully designed that one practically does not register its movement, no noise or any shocks. The only thing one feels is lying in one's ears, due to a change in pressure. It should be borne in mind that there is often so much smog in Shanghai that it is not always worth the prospect to go out.

View of the Pearl of the Orient 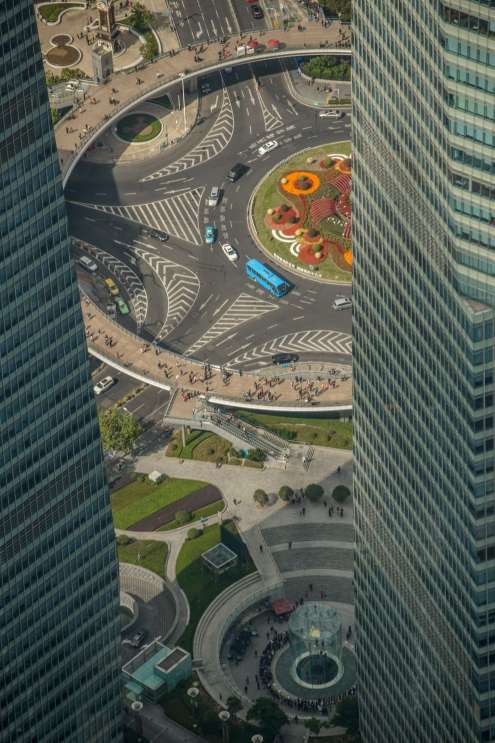 View of the roundabout with the promenade 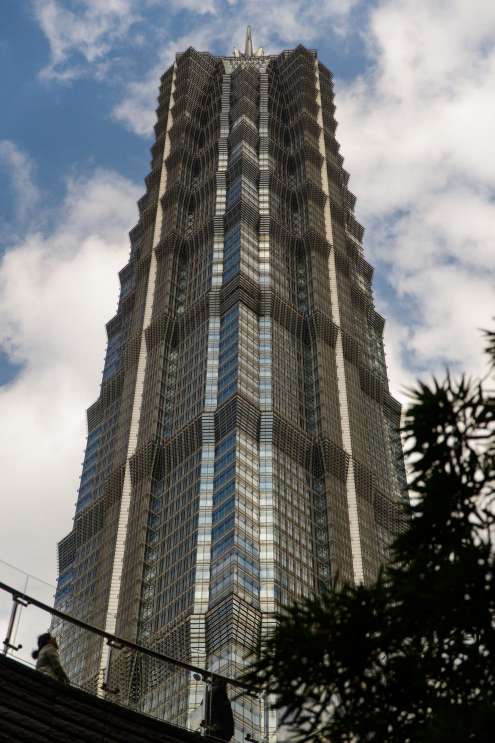 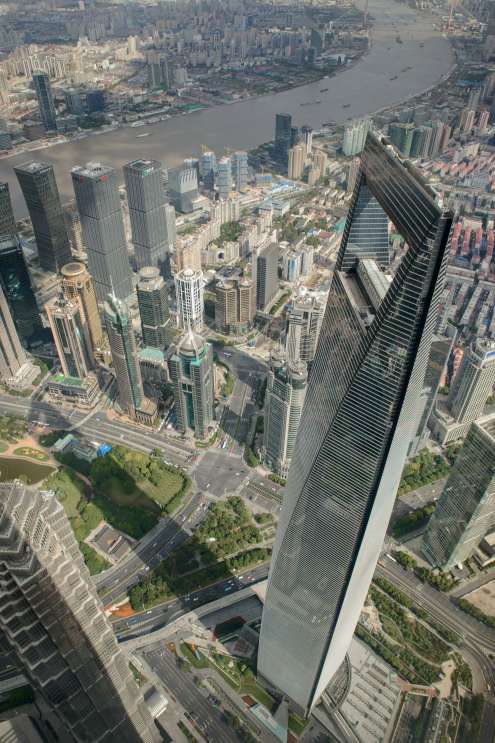 Until 2013, the financial center building, the so-called ** Otvírák **, was the tallest skyscraper in China (492 m). Today we can look at it from above from the perspective of the ** Shanghai Tower **. 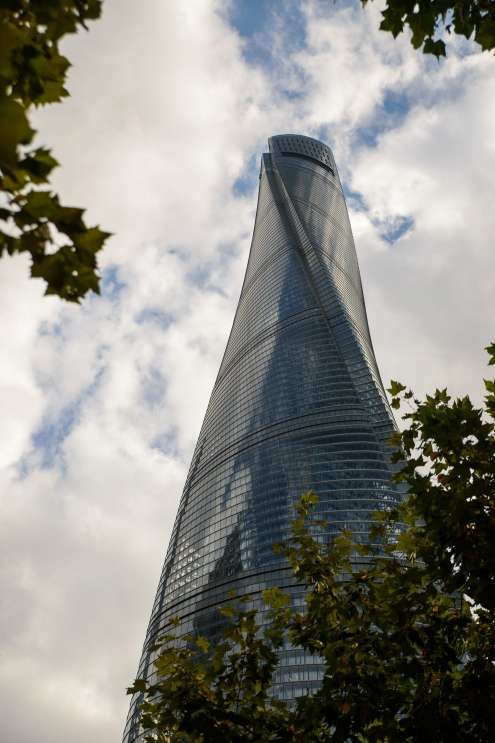 The view from below of the second tallest building in the world (632m) is fascinating. 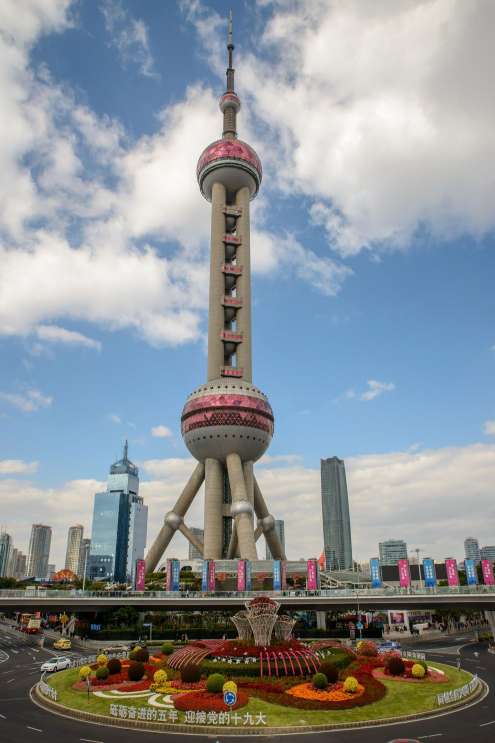 The 468m high television tower is one of the hallmarks of Shanghai and probably the most famous building in this city. Although the main viewpoint of this tower is not as high as in the Shanghai Tower **, it has a glass floor, which can be an attraction for many. The tower also includes a revolving panoramic restaurant.

The opposite of the modern center is the old town, a district full of beautiful historic buildings, temples, shops and restaurants.

The biggest problem in this part is the crowds. There are a lot of them and it often takes quite a long time to get from point A to point B.

The most beautiful and quiet place in the old quarter is definitely the Yuyuan Garden.

** Chenghuang Miao ** or ** Temple of the City God ** is near Yuyuan Garden. Due to the location, attendance is much higher than at other temples, but this colorful temple is still worth a visit.

Directly across the river ** Huangpu **, opposite the centa ** Lujiazui **, is the beautiful waterfront ** Bund **, from where there is an unbeatable best view of the entire modern center. In good weather, it pays to come here at sunset and watch its reflection in the reflection of skyscrapers.

The Bund is also an ideal place for evening walks and observations of colorful skyscrapers. The dominant feature is the television tower ** Pearl of the Orient **, which is constantly changing colors.

Although Shanghai is a modern city, it also offers countless beautiful temples. One of the most famous is the ** Jing'an ** temple. 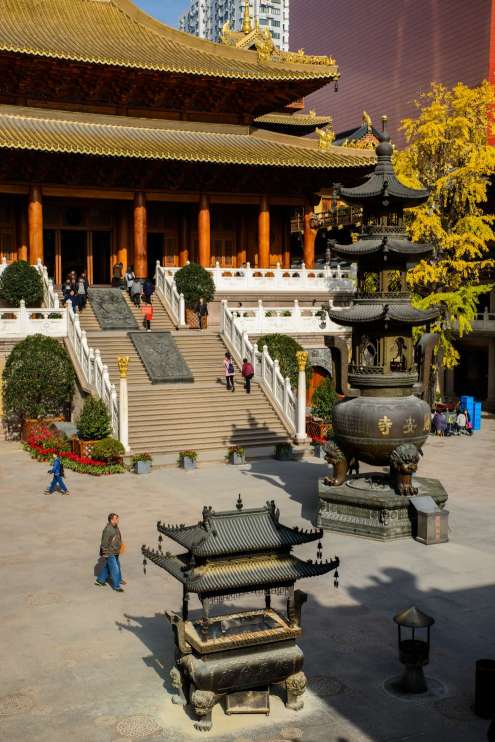 The temple includes many statues, such as the statue of the „Laughing Buddha“ – ** Budai **.

Qibao is a small old town that is now part of Shanghai. Here you will find a tangle of narrow streets with markets and very cheap shops, pagodas, temples and canals with beautiful bridges.

The most famous pagoda in Shanghai – ** Longhua ** stands next to the temple of the same name, which is the largest and oldest temple in Shanghai. 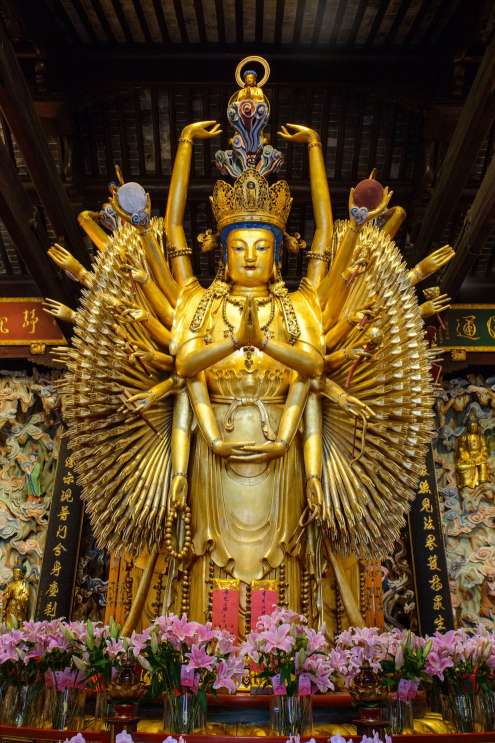 This temple, built sometime around 242, is one of the most important temples in all of China. It has a remarkable history and has been destroyed and rebuilt several times.

Like other overcrowded cities, Shanghai often suffers from smog. However, even with increased smog, the enlightened night Bund has its charm. 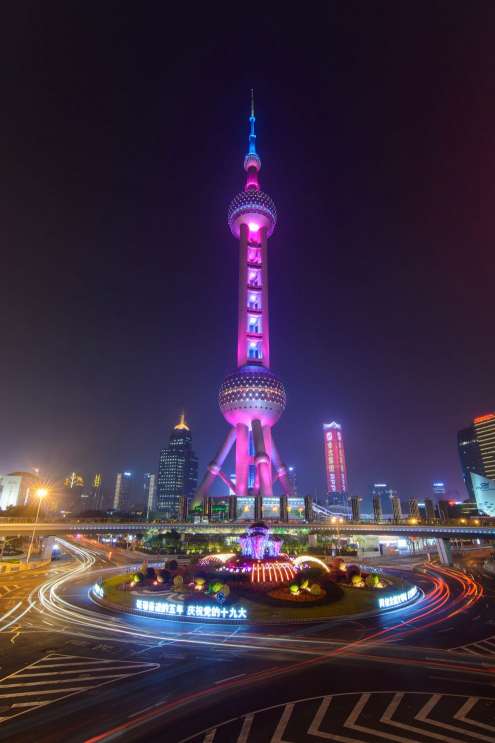 The circular promenade, which seems to float above the colorful roundabout, is also worth a night visit. 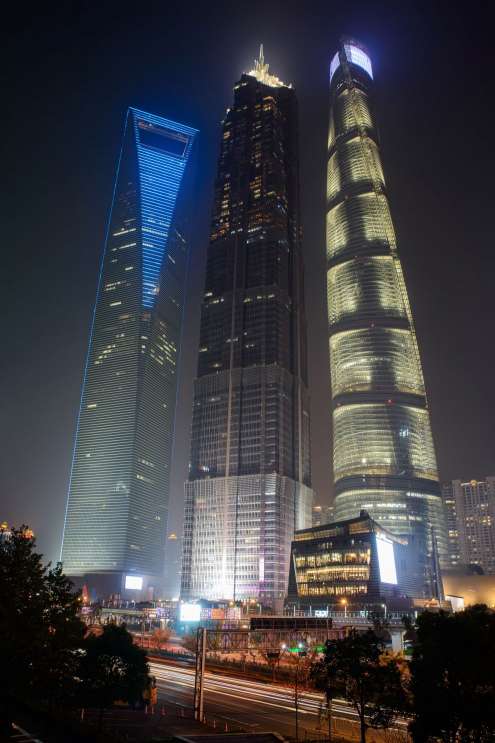 Originally, we wanted to choose the one on the Pearl of the Orient as the second prospect, but due to the increased smog, we finally missed it and a bottom view of three of the tallest skyscrapers was enough.

Travelogue a week-long trip to Taiwan

Trip to the Great Wall of China (长城)