Singapore - a state of the 21st century

Asian tiger with a difficult past

Martin Javorský
Wrote 204 articles and follows him / her 9 travelers
(1 rating)
The most beautiful places
© gigaplaces.com
They been there:
They want there:

a multicultural city-state with a difficult past with hard work and discipline has developed into an economic tiger. It is a major transport hub and travel attraction

Singapore - a state of the 21st century

When Singapore was expelled from the Federation of Malaysia in 1965 and the naval base was closed, few predicted a bright future for the country. The island's city-state, surrounded by hostile neighbors, has suffered from water shortages and no mineral resources. Key trade with China fell sharply, the island was overcrowded and it was difficult for the population to find employment and suitable housing. In this situation, authoritative Prime Minister Lee Kuan Yewa took over the government. It is mainly thanks to him that he managed to find a suitable direction and application for this country and under his strict leadership Singapore became one of the richest, cleanest and safest countries in the world. It has become a major global financial and business center and has developed the production of advanced electronic devices. It took great advantage of its convenient location and became one of the most important transport hubs on the planet. It is now the second largest port in the world. Changi's state-of-the-art airport serves as an air hub between Europe, Asia and Australia. Thanks to its enlightened leadership and the hard work of its people, Singapore has become one of the most advanced economies in the world, is a financial, commercial and transport center of world importance and is rightly called the Asian economic tiger. This state-of-the-art and extremely rich country is characterized by low unemployment and an exceptional quality of life (some sources even refer to Singapore as the country with the highest quality of life on the planet). Singapore has a very high population density, with a population of approximately 5.5 million, of whom 75% are Chinese, 13% Malays, 9% Indians and the rest other nationalities. It is one great mixture of races, cultures, nations and religions. The population is 55% Buddhists, 15.5% Muslims, 12.5% Christians and 3.5% Hindus. We often witness that places where different cultures and religions meet are potential hotbeds of violence. But Singapore is surprisingly one of the safest places in the world. Singapore has embarked on a path of tolerance, but accompanied by firm rules and an uncompromising demand for compliance. Hand in hand with this is also strong protection against unauthorized migration, such as double fences at borders, strict document checks and electronic registration of visitors. Already on the registration form, which everyone must fill in at the entrance to the country, it is written in big red letters that drug smuggling is punishable by death. Because secular Singapore is surrounded by Islamic states (Malaysia and Indonesia), he decided to build a strong army. Despite the relatively small population, the Singapore Army has over 50,000 troops. The cost of the armed forces is almost 5% of the state budget. As early as 1965, Singapore became aware of its problematic strategic situation and asked Israel for cooperation, which was and still remains in a similar situation. Israel provided its military advisers to Singapore. Because Singapore is a very small island, its only defense against an attack from the outside is a preemptive strike on enemy territory. If a potential opponent gets directly to Singapore, the chances of effective defense are minimal. Purity, decency and consideration are absolutely essential elements of Singaporean culture. Here you will find warnings about prohibitions, fines and penalties at every step. For our people, punishment with cane wounds is a bit curious, but everything aims to be considerate of others. However, it is not true that you would be fined immediately for discarded paper, rather no one would even think of it in this super clean country, and if a careless stranger does it by chance, a native will immediately pick up the paper. Even lonely women can walk around the city and parks even at night without any worries, unfortunately we are hardly looking for such security in Europe today. Tourism is supported at every step, the infrastructure works great and thanks to a prudent step – the establishment of English as one of the four official languages, you can speak everywhere and read everything. Thanks to the tropical weather and the monsoon rainy season, the city has built an extensive labyrinth of underground shopping boulevards and wide corridors, shops, hotels, restaurants and other services. A modern driverless metro will take you everywhere. Visitors can easily enjoy the beauty of the futuristic gardens at Gardens by the Bay, watch fantasy night performances, visit the world's largest aquarium, enjoy the amusement park and city beaches of Sentosa Island, stroll through the Chinese, Indian and Islamic districts or take a bath. in the Marina Bay Sands’s infinity rooftop pool. Among other things, there is a unique opportunity to get acquainted with diverse Asian cultures and, last but not least, cuisine in a small space. Singaporean cuisine has been influenced by Malaysian, Chinese, Thai, Indian, Sri Lankan, Middle Eastern and Indonesian cuisines. If you like hot and spicy dishes, then you are guaranteed to have a great time here. Singapore is definitely worth a visit for several days, because it is not only a very attractive tourist destination, but its history and present will allow us to learn more about one of the possible ways of development of society in the 21st century.

there is so much to buy and taste

The entertainment complex in the south offers a plethora of activities

there are also several beaches within the park

the historical part behind which the hurried Singapore peeks out 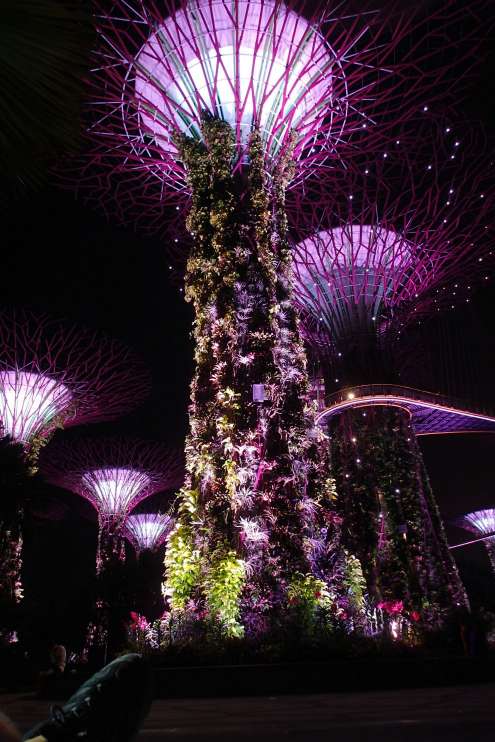 Gardens by the Bay

Futuristic gardens are most interesting at night. There are usually only a few people there and you don't have to worry, it's completely safe there.

The subway is reliable and safe while running without a driver

Trip to the Maya Bay beach

Sailing from Phi Phi to Krabi