A settlement that changed tramping

Martin Gregor
Wrote 179 articles and follows him / her 16 travelers
(1 rating)
Sightseeing Folk buildings
Author: Martin Jack Gregor © gigaplaces.com
They been there:
They want there:
+1

Tramp settlement Golden Key was established in Kladno on February 20, 1956, the name of the settlement originated from the book Srub U zlatého Klíč. It took several years before the settlement discovered a cottage in South Bohemia in a former village, which they subsequently reconstructed and named it Fort Hazard. Fort Hazard is best known for the Ryvolová brothers and the band Hoboes. Songs like Bedna vod whiskey, Vodjíždím, Tereza and many others. When these songs are taught in elementary schools and played by campfires or are heard on the radio.

The settlement that changed Tramping

Tramp settlement Golden Key was established in Kladno on February 20, 1956, the name of the settlement originated from the book Srub U zlatého Klíč. It took several years before the settlement discovered a cottage in South Bohemia in a former village, which they subsequently reconstructed and renamed Fort Hazard. Fort Hazard is best known for the Ryvolová brothers and the band Hoboes. Such as a box of whiskey waters, Vodjíždím, Tereza and many others. When their songs are taught in elementary schools and played by campfires or are heard on the radio. With their music in the 60's they made a booom in tramp music, which was unparalleled in its rhythm and lyrics. Some experts claim that the lyrics of Wabi Ryvola are the best and most unrepeatable that any lyricist has ever written. They started winning various competitions and the first years of Porto. It was all at a time when the Golden Age of Tramping came in the 1960s. The Golden Key starred in the 1965 film Potlach and then in the series of mini-films The Adventures of the Six Hikers. Since then, they have been in the subconscious of the general public, and for the last time they were seen in the Czech Television documentary Special Signs of Desire. We are hikers, eternal vagabonds, we are birds who understand, we are beauty thieves and vagrants, we are swimmers on a raft to the Land of the Three Suns, we are what we are and we know ours, and that's why we don't want to sleep once a week … Miki Ryvola We got there now for Easter and the Golden Key settlement was making wood. They met their sheriff, Mikoy Ryvola, and after the debate he showed us what had been here before. As soon as you get here, you walk around the drained pond. Fort Hazard is located on a former village square. From the view from Hazard, you can see the wall of the forest, about which he said that when they started riding here, it was small spruces. On arrival at this meadow there was a farm and there were other farms in the area. Behind the cottage was a hammer. When we asked about the settlers, he jokingly said those with those gray heads are original and took us to the cottage. The other settlers are also jokers, so you feel like you are here. They were about to eat and were ready for Easter. We were invited to welcome us with a shot and a beer. We also talked about how everything came about at the ceramic school in Bechyně, where they studied, including Miki Ryvola. Here they founded the Demigon „Demižón“ club, from which other Golden Key settlers emerged. What it will look like with the settlement is already planned. Today, the settlement has over 50 settlers and none will be accepted, and thus the settlement will gradually disappear, at least according to the words of one of the settlers. I will not write about where the settlement is located. They have a sad side in this regard, they have been robbed 16 times, so I do not want to contribute to this article.

To the right is the dry pine of Wabi Ryvoly, which he planted here and then destroyed the gamekeeper, and thus grew to the sides. 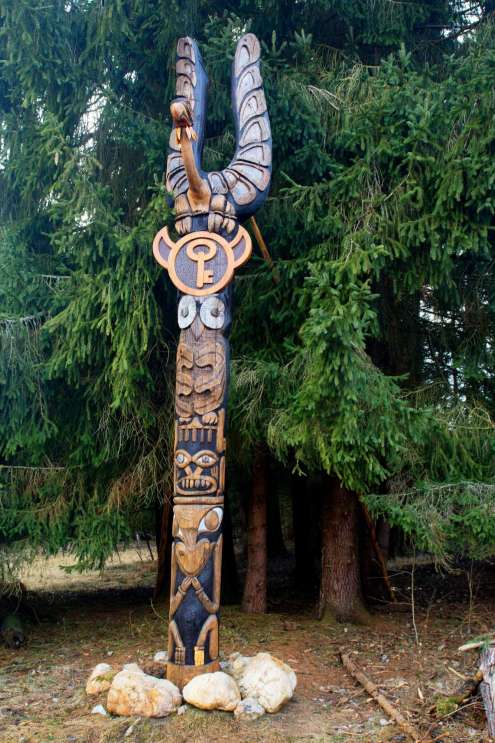 The Golden Key has a new totem, with a vulture at the top, and the motifs of the Canadian Indians continue. When they beat a tree and found that they could not carry it, Miki jokingly said, „We will cut it down until we carry it.“

View from the meadow

On this wall are those who are already on the other bank.

This is the original photo of the cottage.

The settlement was always lively

It was always alive here

We say goodbye too

We also say goodbye to this famous settlement, which is located in South Bohemia.

We say goodbye too

We also say goodbye to this famous settlement, which is located in South Bohemia.

A tour of České Budějovice

A trip to the ruins of the Dívčí Kámen castle

View from the Kleť lookout tower