Martin Javorský
Wrote 195 articles and follows him / her 9 travelers
National parks and protected areas One Day Trips
Author: Martin Javorský © gigaplaces.com
Suitable for:
Car tourists
Seniors
Holidaymakers
They been there:

Approximately 2.5 km south of Františkovy Lázně there is a relatively inconspicuous forested hill formed by volcanic material. In its deforested eastern part is an abandoned pit quarry, adit and rock outcrops. It is one of the youngest volcanoes in the Czech Republic. This loose cone formed by basalt was created by a single explosion, during which hot lava and rocks were ejected from the subsoil. It happened sometimes at the beginning of the Quaternary, but the reverberations of volcanic activity are still evident today through the springs of carbon dioxide, mineral springs and occasional earthquakes. Today, Komorní hůrka is a national natural monument with an area of 7.1 hectares. There is an educational trail with information boards about one kilometer long.

Komorní hůrka was originally forest-free, now the places where it would be possible to study its geological past in the field are completely overgrown and confusing. At the site of the former volcano is now a wooded hill formed by a cone of volcanic material. In its deforested eastern part there is an abandoned pit quarry, adit and rock outcrops.

Today's Komorní hůrka is a very quiet place surrounded by greenery. In the upper part of the hill you can see several „craters“, which, however, were created by human activity – mining. Volcanic slags and tuffs have been mined and used as a popular building material in the past. Thanks to this, almost nothing was left of the poured volcanic cone. The mining pit area is a botanically valuable locality with more than 100 species of vascular plants and an extremely rich population of the rare cuckoo orchid. This is due to the basalt composition of the subsoil that plants like and the local warm climate

Fortunately, some places around the mining pit are exposed, so at least here it is possible to see evidence of volcanic activity. There are multicolored about an inch to two large fragments of material ejected and left by the volcano.

At the end of the 18th and the beginning of the 19th century, there were disputes as to whether Komorní Hůrka was a volcano at all. Some scientists believed that the basalt layers were formed by settling on the seabed. This dispute could not be settled by observation from the surface, the only thing left was to look under the volcano. Therefore, in the years 1834 – 1837, Count Kašpar Maria Šternberk had a adit excavated on the slopes of Komorní Hůrka. 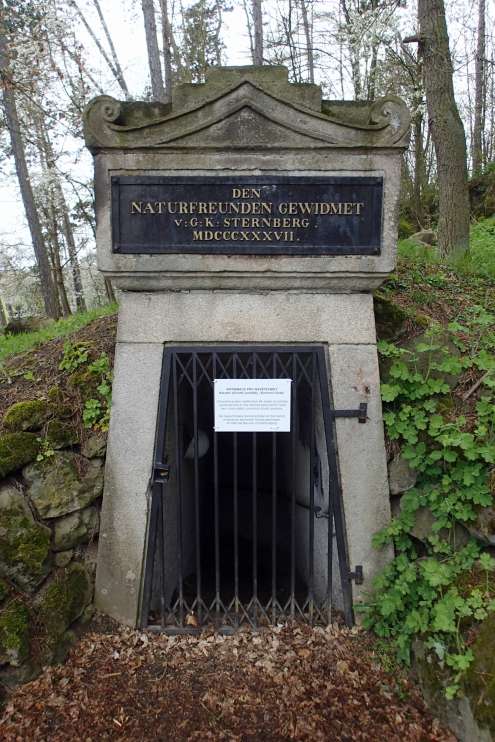 Granite portal of the exploration gallery

The granite portal of the exploration gallery is decorated with a memorial plaque commemorating Count Kašpar Šternberk. The inscription „Den Naturfreunden gewidmet v. GK Sternberg, MDCCCXXXVII“ (dedicated to the Friends of Nature by Count GK Sternberg, 1837) reminds us that this mining work was excavated only for scientific purposes. ready for public tours with professional accompaniment and further access is being made.

Komorní hůrka is one of the most explored volcanoes known in the scientific world. Dozens of scientists, who have been paying attention to this volcano for more than 200 years, have contributed to its fame. The poet and educated naturalist JW Goethe was directly involved in the dispute over the origin of Komorní hůrka and proposed to dig the hill and get an answer to the question of the formation of rocks by volcanic activity. On the slope above the gallery there is a rock on which is carved a relief of the head of JW Goethe with the inscription "Goethe dem Erforscher des Kammerbühls – 1808, 1820, 1822 – (Goethe, explorer of the Chamber Hill), reminiscent of the poet's visit to this place.

The current shape of the Komorní hůrka hill is formed mainly by the embankment cone. During volcanic eruptions, hot and liquid lava was ejected from the crater, solidifying in the air. On the way to the top on a well-trodden path, it is possible to see the characteristic solidified lava in the form of rocks. It almost gives the impression that the country's pro­duction process did not stop until yesterday. At first glance, you will know that it is a slightly different rock – it has bubbles.

The cross of Princess Pascalina

The most famous island of the Czech Republic is occupied by the world-famous Karlovy Vary. It is famous mainly for its spas –… continue reading