The Bergsteigen server writes that you don't have to go there unless you are in great condition, able to climb unsecured 2 UIAA not only up but also down, I confirm. The hike is really long and exposed, from west to east, 2400 m elevation gain, 17 km. We went for 16 hours. There are fuses in the three places, which is nice. Expect to be in the hot sun all day and you will have nowhere to refill the water. You can get off the ridge when you „cross“ the peaks to which the normal leads, but the journey to the valley is a three-hour affair. 07/2020

Long start from the valley

We went to Gesäuse for three days. You are there from Prague in 5 hours. The character of the landscape and limestone peaks are very reminiscent of the neighboring Totes Gebirge. You have to cross the mountains in one day if you don't want to climb „hard“ and bivouac. The photo is from the first day when we went to climb the multi-lengths on Festkogel, specifically to Kleemhummel and Skiny, only to start it was 800 meters. It held up nicely on the limestone, but they didn't waste much security here.

We find it on the ridge

We find it on the ridge (Kirchengrat) around half past eight in the morning. From the Forstgarten campsite, we set off a short time after six o'clock and approached the boarding car leading from the turn-off from Johnsbachstrasse. It was necessary to return for the car in the evening, or it could be postponed to the next day and only reach the camp.

Climbing between Kleiner Ödstein and Großer Ödstein. It looks a bit dramatic, but it wasn't hard at this point. 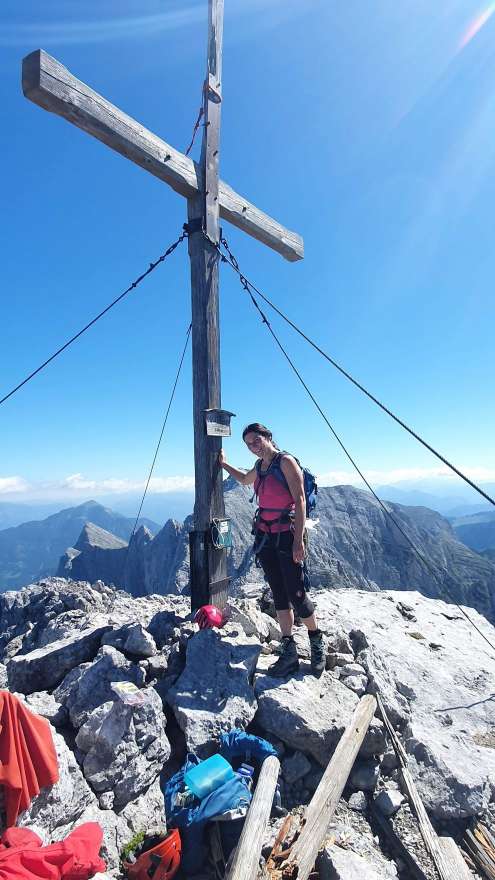 The first of the peaks through which the ridge hike leads. Gesäuse is the youngest nature park in Austria, it has been a national park since 2002, it took the Styrian government almost a century to decide and legislate the park, because the use of hydropower was considered, which is a little worse combined, Gesause is crossed by a river from west to east. Enze.

There is technically the most difficult part between Großer Ödstein and Festkogel. There are fixed ropes on the descent from Großer Ödstein, the picture is taken from them, the photo shows the ascent to the Teufelsturm. 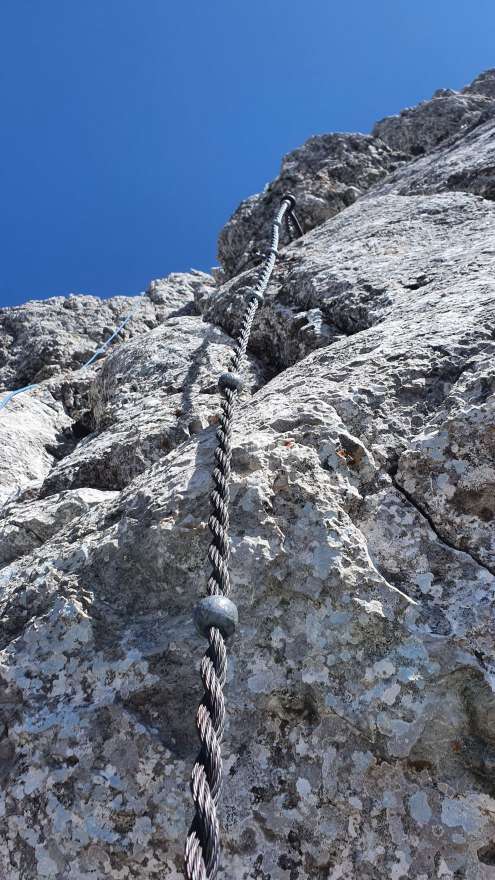 The end section in front of the Teufelsturm. There is a steel rope that can be held, the climb is still quite strong and mainly airy; from here you simply fall into the valley … We decided to unlock it with a rope for sure.

At this moment, the most technically demanding part was behind us and a traverse to Festkogel was waiting for us. The picture shows all three peaks – Festkogel, Hochtor and Planspitze in a row.

This film captures the opposite view – from east to west, from Festkogel to Großer Ödstein, to the part of the crossing we have already completed. 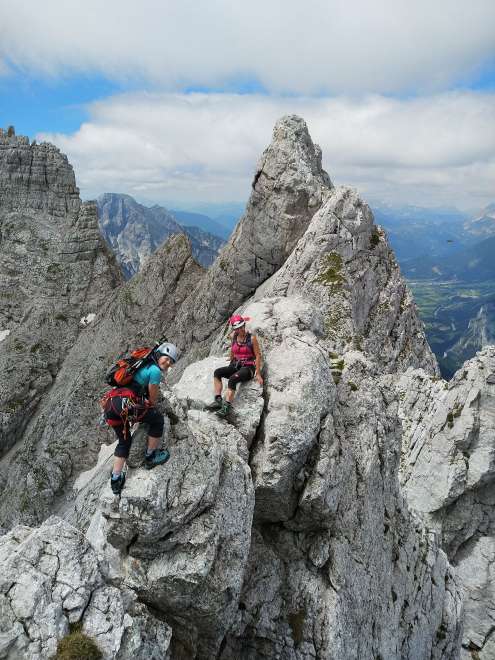 And a shot from the same place with people, the red dot behind my helmet is the route markings.

Hochtor (2,369 m) is the highest crossing point, it is the highest peak of the Gesäuse. There is a normal from the valley and several climbing paths, also north of Hochtor, several lengths leading from the Haindlkarhütte hut, which we considered as a variant instead of a crossing.

There are several routes down from Hochtor, the fastest emergency option is to descend the Josefinensteig ferrata to the Hesshütte, which should not be longer than 2 hours, but you will still have a trip to the valley. The descent straight into the valley to Johnsbach is also possible, the path is a bit steeper, leads through snow fields and should be manageable in 3 hours. „The Great Gesäuse crossing“ continues along the 2+ ridge by climbing down over the top of Rosskuppe. From here you can go to the last peak of the crossing – Planspitze, or go down to the Hesshütte (easier option), or Haindlkarhütte, where we went. You will not be able to find the descent from Hochtor to the climbing ridge, unless you study carefully in advance that you have to return easily from the top. We had a gpx route, but it was just the same wandering we did.

View from the Haindlkarhütte hut

The view from the Haindlkarhütte hut, or just above it, captures the entire ridge hike. The descent from Rosskuppe and Perternscharte is initially a twofold affair, then an endless pilgrimage of rubble, which fortunately the stream flows through, so you can drink and refresh yourself in the lower parts. However, the journey is difficult and tiring just by the late afternoon sun washing you all the time. The refreshments at the cottage were more than deserved, but not long, we needed not only to get down (or ascent through the Gsengscharte) to the road Johnsbachstrasse before dark, but we still had a five-kilometer „trip“ for the car and we hoped that the lights manage to stop something.

Gesäuse in the setting sun

In conclusion, this tour, as well as all high mountain tours, is to say that it is always crucial who you go with and whether the group is not only matched in performance, but is also functional overall. In any case, it is always good to know the route and possible variants individually, in principle at a fairly perfect level, it has not yet paid off for anyone in the mountains to rely on others.

Author: Miroslav Svoboda © gigaplaces.com
Applaud the author of the article!
Share it on: