Martin Javorský
Wrote 214 articles and follows him / her 11 travelers
Culture Museums
Author: Martin Javorský © gigaplaces.com
Suitable for:
Car tourists
Seniors
They been there:
They want there:

In the village of the small village of Dobčice (about 18 km west of České Budějovice) on the edge of the PLA Blanský les, there is a unique museum of the military equipment of the American army, which liberated this part of Czechoslovakia in 1945. In the extensive outdoor and indoor exposition there is a sample of the equipment of the American army from during the liberation of Southwestern Bohemia in 1945.

The entire exhibition comes from the private collection of Vladimír Záluský, who collected exhibits for many years all over the United States, where he emigrated. Six years ago, he bought an old fortress, which he converted into a unique museum. The result is a display of fully functional combat vehicles, complete equipment of the command staff, a first aid station, a field kitchen, a field chapel, an extensive collection of uniforms and equipment and much more.

In the courtyard of the museum, a collection of combat vehicles can be seen, all of which are mobile and occasionally take part in historical rallies.

Of course, a classic jeep with replica weapons, a radio, period equipment and a crew cannot be missing.

Among the military vehicles, the officer's Cadillac 41, which is the only example in the Czech Republic and the first car in the world with an automatic transmission, will attract attention. The vehicle is still drivable. The famous photo of General Patton leaning on his bumper is also associated with this car.

The mobile field chapel is truly unique. It is probably the only surviving exhibit of its kind out of a total of 1,500 produced.

The owners are true enthusiasts

The owners of the premises and exhibits are Vladimír Záluský and his wife. As a child, Mr. Vladimír remembers the arrival of the American army in 1945 and that is why he decided to realize this expensive and demanding exhibition. He purchased the property, renovated it and transported the exhibits from the US in several containers.

On the ground floor of the building, there is an exhibition where you can see connecting equipment, staff office equipment, infirmary equipment and other equipment. An interesting feature is, for example, a stamping machine for identification metal tags for soldiers. 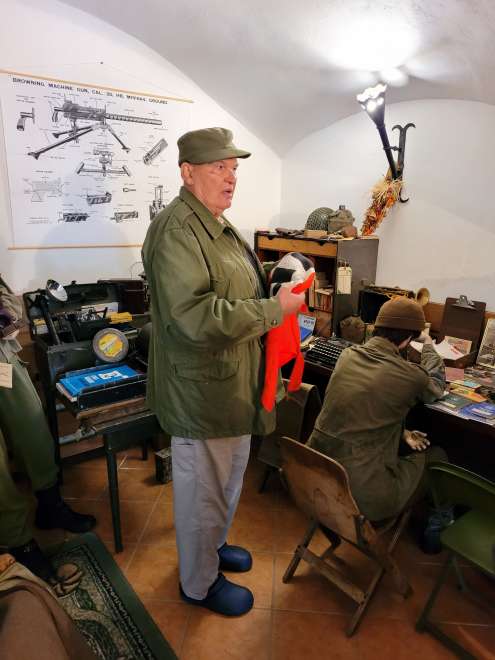 The museum is open by appointment, it is recommended to arrange a tour in advance by calling 720 024 003 or 725 587 290. The owners are true enthusiasts and their interpretation is full of interesting and technical and professional details. Admission is voluntary.

Of course, there are also a number of uniforms, helmets and badges. Hundreds of other details will draw you into the period war situation

You can view hundreds of period trinkets.

There is also a demonstration of military canned food. An interesting fact is that many manufacturers and products are still on the market today

In addition to this unique museum, the entire small village of Dobčice is also worth a visit. There is a picturesque semi-trailer with a chapel, a pond, houses in the style of rural baroque. The village is dominated on the western edge by the fortress just mentioned. It is interesting that the village became visible because Troška's films Babovřesky 1 to 3 were filmed here.

A trip to the ruins of the Dívčí Kámen castle

View from the Kleť lookout tower

A tour of České Budějovice