Walk through Bubeneč to Stromovka

Dominika Charvátová
Wrote 119 articles and follows him / her 11 travelers
(1 rating)
Cities Parks and Gardens
© gigaplaces.com
Suitable for:
Families with a stroller
Seniors
Hikers
Excursionist
They been there:
They want there:

Avoid crowds of tourists while walking through Prague and still visit places that are not so well known even among Prague residents. This is the route of this walk. Its beginning leads from Chotkovy sady (if you go from April, it is possible to go from the Royal Garden). We will walk through the Bubeneč district, which is full of luxury villas, which are the residences of consulates and embassies, or monuments to famous personalities of our history. The goal will be in the royal game reserve Stromovka, which got a new form after the reconstruction of the lower part.

If you go from the open royal gardens from spring, you will find this beautiful Renaissance summer house at the end. But despite the winter season, you can enjoy it at least from the view from Mariánské hradby Street and with the Czech flags hoisted. The summer house was built for his companion Anna Jagellonská by Ferdinand I in 1538–65. Today, you can only look inside if it is hosting an exhibition.

Chotkovy sady with a view

Right behind the summer house are Chotkovy sady, our beginning of the walking route. You can easily get here by tram to the Královský letohrádek station. It is not one of the largest parks, but with more breathtaking views.

From Chotkovy sady there are some of the most beautiful views of the decommissioned bridges over the Vltava. We can see the Charles Bridge in the foreground, the Legion Bridge with a passing tram, Jirásek Bridge, Palacký Bridge and at the end the railway bridge in Výton.

We will cross the pedestrian bridge at the end of the orchards to the beginning of the Letna Gardens. These are undoubtedly also a very magnificent place to go in Prague, but today we will turn to Gogolova Street behind the bridge, if you want to see Stockar's semi-detached house. The architect Rudolf Stockar was one of the promoters of garden English towns of the anchor type and a direct initiator of the construction of a residential area on bastions.

Then we turn to U Písecké brány Street, where at the beginning of it we walk past the bow of Bílek's villa, which is bent. The villa was built in 1911 by sculptor, graphic artist and architect František Bílek. In any case, we continue down the alley until we come across the Písek Gate, which was originally part of the city fortifications (fortification system) of the Marian Wall.

From the gate we walk down K Brusce Street until we find ourselves on Hradčanská. We walk past the entrance to the metro and enter the Bubeneč district via the railway crossing. You will find countless embassies and consulates located in luxury villas, mostly First Republic. In Pelléova Street you will find a villa of the same name, which is worth mentioning. Pellé's villa was gray built in 1889 by architect Rudolf Koukal, but was named after the villa's most famous inhabitant, the French general, commander of the French military mission in Czechoslovakia and later the chief of the Czechoslovak General Staff, Maurice Pellé, who lived in the villa in 1919. –20. Today in the villa you can visit one of the exhibitions of modern and contemporary art, concerts, theater performances or one of the educational and social events. There is also a café. 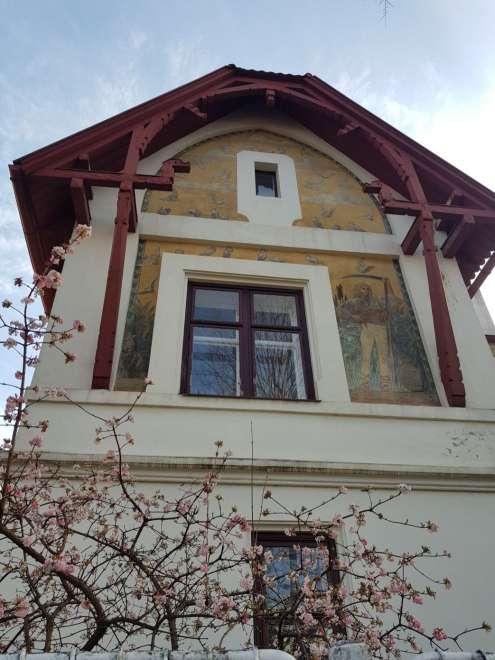 Just opposite Slavíčková Street is another of the historical monuments, a non-traditional villa in the Vladislav Gothic style. The architect was Jan Koula, who was one of the leading representatives of historicism in Bohemia in the second half of the 19th century. 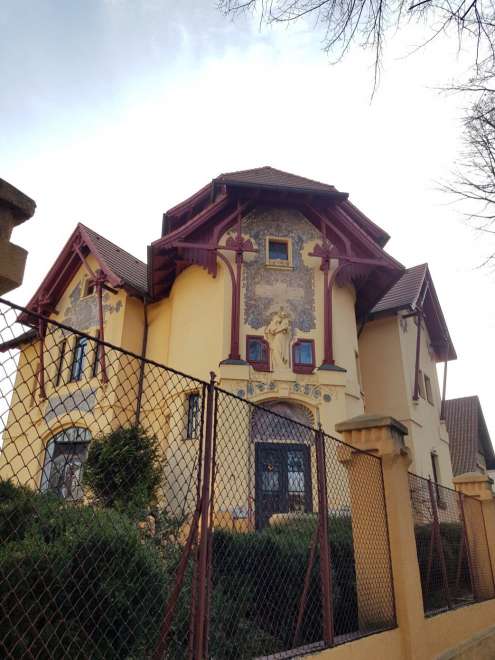 Just a few villas away is another very untraditional villa with an architecture somewhat similar to the Ball Villa. However, this villa of Karel Vítězslav Mašek was built in the Art Nouveau style in 1901. The villa has a corner tower, gables with wooden struts, the facade is decorated with colorful sgraffito and a relief of the Madonna by Ludvík Wurzel. 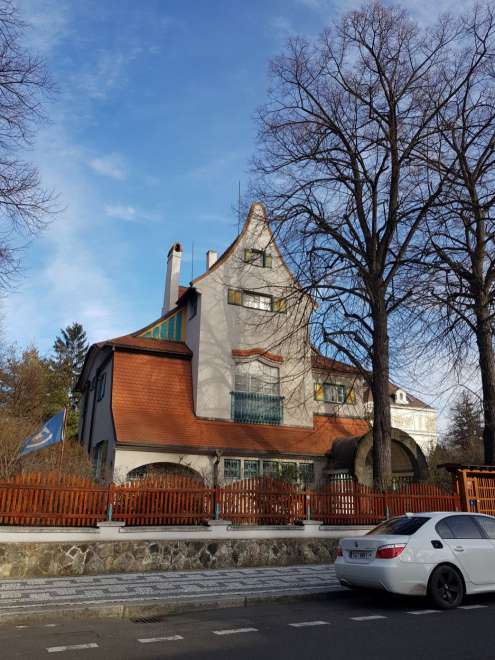 If we turn the first turn left into Suchardova Street, we will find another interesting villa. It is a private villa, where its architecture has an unconventional character inspired by Dušan Jurkovič in 1907. It is a modernist building with folk elements, in the creation of which modern construction materials were used.

Embassy of the Slovak Republic

After interesting villas, we will finish the roundabout again by turning left into Na Zátorce Street. Here I was interested in the non-traditional building of the Embassy of the Slovak Republic. Most of the embassies and other villas in this district in Bubeneč are villas built in the last century (at least). This building really stands out with its modern design.

Embassy of the People's Republic of China

In Bubeneč you will find probably most of the embassies that are in our territory. One of the most interesting is, for example, the embassy of the United States, which is a bit hidden behind a massive wall in Bubenečská Street. I was caught by the red lanterns of the Chinese embassy in Pelléova Street further down towards Stromovka.

Almost at the end of Pelléova Street in the corner with V Sadech Street, another unique villa is located. Villa Lanna was built in the Neo-Renaissance style as early as 1872 by Vojtěch Lanna, a prominent industrial entrepreneur and collector of artistic monuments, as a summer holiday home. The building is decorated with frescoes on the outside. The villa offers the possibility of renting, for example, weddings in beautiful period interiors and adjacent gardens. 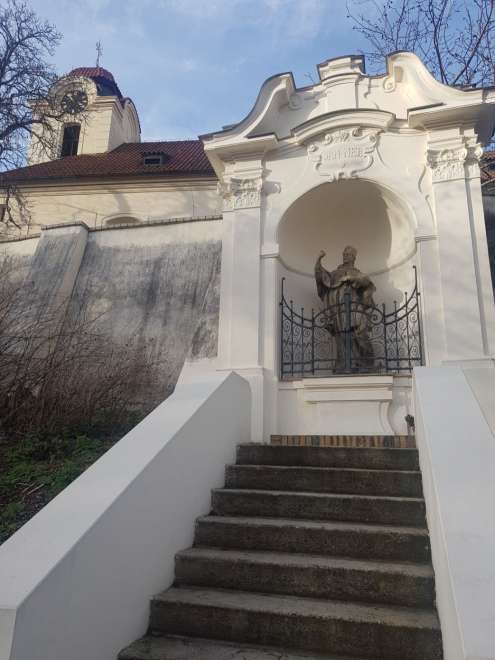 Church of St. Gothard with a chapel

If we go down the hill along V Sedlech Street, we will come to the Catholic Church of St. Gothard. It has been standing in these places and has been shining white since 1801. In the enclosure wall there is a baroque chapel with a statue of St. Jan Nepomucký from the second half of the 18th century.

Embassy of the Kingdom of the Netherlands

Then we just run down Gotthard Street around the embassy of the Kingdom of the Netherlands, housed in a beautiful renovated palace at the very foot of the entrance to Stromovka. 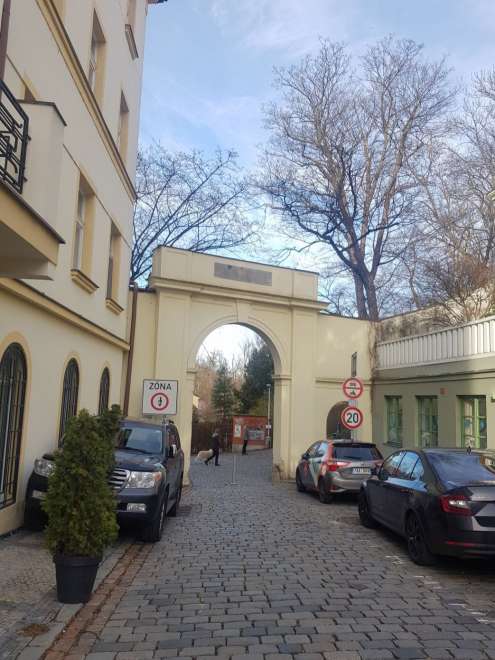 The south-western entrance to the Stromovka Royal Game Reserve welcomes you through this gate directly below the Dutch Embassy.

For 3 years, the lower part of the park, which was damaged by several floods, was reconstructed. This reconstruction ended in 2017 and thus opened up newly revitalized ponds to visitors, which are fed from Rudolf's adit. Piers, landscaping and lawns were also built here. The new look has moved Stromovka to the level of such concepts as English landscaped parks.

After the renovation, the ponds also host many birds, which help to bring a little wild nature to the park. You can find them on the ponds Slunečnice, Srátko, Zelený rybník, Šestáček, Rudolfův rybník and little Rozinka. There is a nice view of the ponds from the renovated Šlecht restaurant nearby.

At the highest point of the royal park stands a summer house, which overlooks the entire Stromovka from above. A Gothic hunting lodge has stood here since the end of the 15th century, but many of it has not been preserved, so it was rebuilt in this Renaissance style at the end of the 16th century. Today we find the archive and study of the journals of the National Museum.

I ended the walk with a rather sad look at the remains of the footbridge in Troja, which collapsed in December 2017. There is currently a ferry here and the new footbridge should be open by the end of 2020.

Behind the stained glass windows to St. Vitus Cathedral

A walk around the New World

A tour of Hradčany Square

A walk to the Strahov Monastery